Blob Thing Gets Up Close And Personal With an Angel


Blob Thing loved The Angel of The North but did spent quite a bit of time wondering what had happened to the angel's sword.  However was it going to do any smiting without its sword.  His person had to explain that not all angels have swords and there were even angels around before swords were ever invented.  Blob Thing was pleased to learn that the vast majority of angels don't go around killing people.  He stopped worrying that one day he would wake up to find an angel sword had ruined his dress.

Once he had learned that The Angel of The North is a friendly angel Blob wanted to go and meet the angel even more.  He asked if he could touch the angel and his owner said that would be okay.  Blob could even SIT on the angel.  Blob would have been bouncing with excitement and anticipation and you could almost see his smile grow even larger than normal.

He was taken to the angel and sat there proudly and sang to himself a happy improvised "I'm sitting on an angel" song.  He asked for his photo to be taken on the angel so you could see the angel with Blob.  His person warned him that he would only be a tiny pink spot on the photo but Blob wasn't worried about that.  He wanted the photo.

So here is Blob Thing sitting on The Angel of The North. 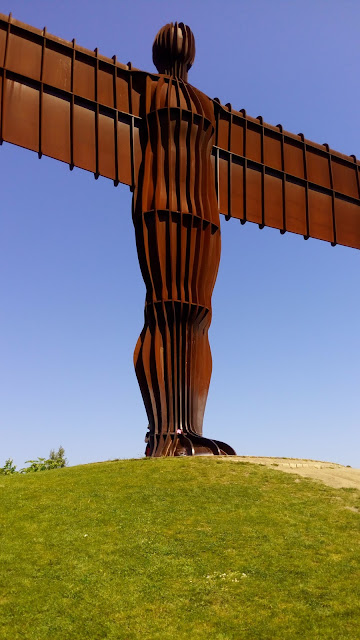 Blob's person showed him the photo and he had to agree that it wasn't the best photo of him that has been taken.  He asked for another photo in which he would be the main focus.

So here is Blob Thing sitting on The Angel of the North. 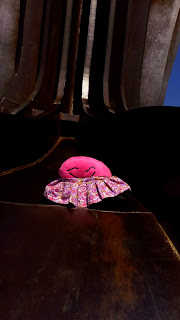 Blob was happier with that picture.  But he thinks it a shame that you can't tell what he's sitting on.  Some blobs are never satisfied!

He had a wonderful time visiting the angel.  As we left he kept smiling about it and he talked about how he would tell his friends about it when he got home.  Yes, Blob has friends.  One day he will tell you about them.

Later Blob Thing told his person a secret.  He wasn't meaning to but he couldn't hold it in.  He said, "The Angel of the North spoke to me."

Blob's person was a little cynical about that.  After all, angelic messages are rare even in a book like The Bible.  Also - and this is something Blob hadn't been told - the Angel of the North isn't a real angel.  It's a sculpture made of metal not a messenger from God.  So how could the angel have spoken to Blob?

Blob quoted Scripture to his owner and said, "With God, ALL things are possible."  Blob also reminded his owner that in most cases a small pink soft toy wouldn't be able to communicate and wouldn't be able to quote Scripture to his person.  His person had to admit that God had a point.  She didn't necessarily believe the Bible but did believe in possibilities and in overcoming things that feel almost impossible.  And she did understand that her conversations with Blob weren't quite the usual thing.  So maybe the angel had spoken to Blob.

With some interest, Blob's person asked him, "So what did the angel say to you Blob?"

Blob looked at her with happy eyes and smiled and sighed contentedly.

"The angel said, "You're a Blob, unique.   Be proud of yourself.  Be proud of who and what you are and live your life in the wonder of your own being.  Be you, love others, and don't let anyone make you feel bad for living a life of freedom and love in whatever way is right for you.  Let go of the things you can't do.  Those things are for others.  Embrace what you can do.  Embrace your desires, your dreams, your passions and let your creative spirit flow.   If people look down on you for being a Blob Thing rise above them and know that you are beautiful, you are strong and you are as valuable as any soft toy could be."

Blob said that he knew that he could have read such things in a book but it was the angel who said them.  He said that the angel had told him other things, things that he wasn't allowed to share.  Things about his future and about his person.

Farewell strong angel.  And thank you. 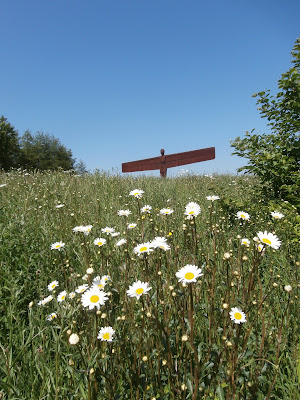