Blob Thing Gets Up At Greenbelt And Goes To The Airport

Note:  All the photos are random ones taken on the Saturday of Greenbelt.  They aren't connected with the events told in this post.  There's a reason for that which Blob Thing will explain at the end.


Everyone is feeling very tired this morning.  Nobody slept that well.  It turns out that Blob's person has developed some kind of allergy to Crawley, the town their staying in.  Yesterday her eyes kept stinging and her nose kept running.  Maybe it's not Crawley to blame.  But it feels as though it is.  It was a problem last night though because every time Blob Thing or Winefride was falling asleep, Blob's person would blow her nose loudly and they would be wide awake again.   Blob wishes that his person's nose was designed in such a way that it could be blown silently.  If he was an intelligent designer we would have built the human body very differently.  Forget all that argument about the design or evolution of eyes.  He would have sorted out human spines.  He would have made everyone immune from the common cold.  He would have made noses silent.  And then, just to please everyone, he wouldn't have designed a creature at the top of the pile and given them hiccups.

For Blob Thing, hiccups is a good argument against intelligent design.  Stupid design maybe.  He's happy to agree that the hiccups argument doesn't remove God or a super intelligent alien race as designer.  But he does think that it's an argument against God being a good designer.  One classic argument from design spoke of a watch and how you knew it could only be there because it had been designed and made by a clever person who had studied watch making.  Blob asks whether anyone would be all-knowing and all-powerful and still design a watch that got hiccups?  You can tell that Blob is tired.  He wouldn't come out with his hiccup argument if he was full of energy.

Back to Greenbelt.  He's not going to write much because he's coming to talk about Sunday and that was a more difficult day.  Blob says:

Yes.  It was hard.  Yesterday was hard too.  Maybe in a week we won't be here.  Yesterday also had some good bits.  Winefride and I got taken to look round an airport.  My person has been promising that she will take us to see Newcastle Airport sometime.  We could go there almost whenever we wanted.  It's not hard.  Just stay on the Metro until the end.  But she hasn't taken us there yet and we haven't even been on any really long walks in a while and I would want to.  Yesterday was different.  We went to an airport and it wasn't Newcastle.  I think she only took us because she had to go there anyway.  She wasn't taking us as a treat or anything like that.  I don't suppose we'll get many nice treats while we're in Sussex.  She won't even take us to the Brighton Pavillion and that always looks so pretty in photos.  [Now, now Blob.  I haven't even taken me there.  Ever.  And this trip isn't for you two to be tourists.  It's for practical purposes.]  Today she might not take us anywhere at all she says.  Meanie person.  I'm only joking.  She's not mean to us at all and we have excellent lives for little soft toys.  And we got to go to Gatwick Airport yesterday.  We got there later than planned because we had to put up with her photographing a cemetery first.  She likes doing that.  I like it too when I get to pose on all the gravestones but that didn't happen yesterday. 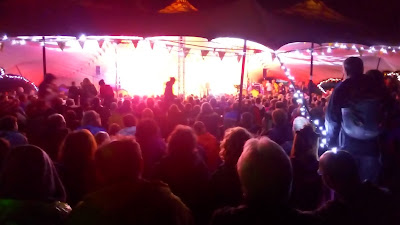 At Gatwick we did a particularly exciting thing.  We got to ride at the front of a train that didn't have a driver.  I want to blog about that when I get home.  It was amazing.  A bit like riding at the front of the Tyne and Wear Metro trains but even better.  The whole of the front of the train was a window and we could see everything.  We could even see all the aeroplanes on the ground.  There was a man who talked about it and called it a flight.   Silly man.  It wasn't a flight at all.  We were riding on a train on a rail and the train wheels ran by the rail not on the rail so it was a crazy kind of train.  He told us that we were flying at a height of thirty-five feet and we weren't.  We weren't flying.  What kind of fool does he take me for that he thinks I might believe him?  Or maybe he truly believes it because he said all the same things on the way back too.  That would be sad if he is that deluded.  He's not harming anyone unless they believe him about a flying train.  But he could get some help to not be deluded anymore.  There are more dangerous delusions.  My person isn't allowing me to talk about them right now.  I am tired and I want to talk and talk and talk but she knows that if I am allowed to let my words fly this morning then I might say things that people don't like even more than they might not like some of the things both I and my person have said in the past.

My person says I should talk about Greenbelt.  Because that's what this post is about.  On Sunday morning my person got up before my creator.  She got herself dressed.  That didn't take long because she had slept in her clothes and didn't bother changing into new ones until later in the day.  She then went back to the all night cafe.  Winefride and I were able to stay in the tent so we got more sleep.  She got practically none.  At the cafe she bought tea.  Two teas.  The cafe was very useful for tea drinking.  They sold a spicy chai tea.  My person and creator appreciated being able to drink lots of it.  By the time Sunday evening came the people in the cafe knew my person's regular order.  Maybe not many people ordered the spicy chai. 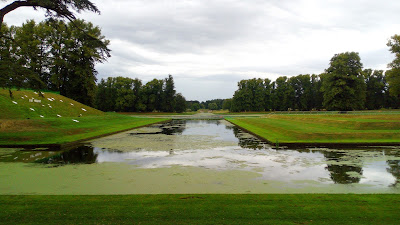 Sunday morning was going to be a challenge.  Most things at Greenbelt stop on Sunday morning for a communion service.  It's hard to find things to do because the festival people think that you'll probably be at the service.  But my person and creator didn't particularly want to go even though an important man would be speaking.  At least, he's an important man in terms of church hierarchy.  Whether he's more important than anyone else is another matter.  He's just got a posh job.  The man was the Archbishop of Canterbury.  He seems nice enough but we didn't go and hear him.  My person didn't want to sit (or stand) through two communion services in twelve hours.  She doesn't go to church normally and is very glad to not go.

She used to go all the time.  For a while she went nearly every day and would very often arrive before the church was even unlocked because she was so eager to pray to her God.  What does she feel about that now?  I know that all the order and the rules and the certainty helped her cope with her brain and gave her some stability.  But does she regret quite a lot of it?  That's for her to talk about.  It's not a thing for a post about Greenbelt when it's my post.  The most exciting thing about the Archbishop of Canterbury for me is that one of my very good friends got named after him.   Portal's name is Portal.  Named after the archbishop.  His name is Justin Portal Welby.  I love Portal and we're all very glad that he came to Crawley with us.

So we were at Greenbelt and the programme didn't list that many events for Sunday morning except for that giant communion.  My person and creator didn't know quite how they would fill the morning.  They had a few plans but didn't quite know what to do. 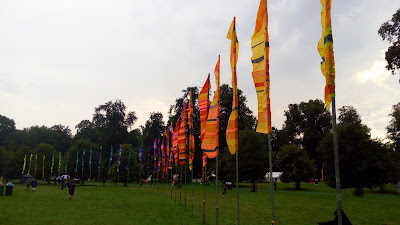 Plan one was breakfast.  The Christian Aid tent had advertised a big fry up and while none of us wanted a big fry up we did fancy some toast and so we went to that.  It wasn't a very exciting thing and the programme had got the time wrong so they hadn't get cooked the frying food anyway.  We all really enjoyed the toast though and were pleased to have successfully eaten some food.

I'm going to stop now.  My person has just received some bad news.  Right at this moment.  All of a sudden she isn't up to helping me write my blog.  That's okay.  We can write it together tomorrow.  It's going to be a strange thing while we're away.  I don't know how much time I'll have for blog writing.  Well, I'll have lots of time but I need my person's help otherwise typing would be very slow indeed.

We'll just add a Greenbelt photo somewhere above to give you all something to look at and my person can then get on with the day.  Sorry that we didn't talk much about Greenbelt.  I promise that we did all find something nice to do.  Don't worry.  But the news is sad and my person might be a bit sad about it too.