Blob says that he wants to take a break from telling you about things that happened a long time ago.  He says that he enjoyed the last week so much that he wants to tell you all about it.  Now.  Immediately.  Everything needs to be told and it's very urgent.  Blob's person has reminded him that he said the same thing not so long ago about Autscape and that he hasn't shared any of those adventures yet either.  Remember Blob, how you spent all that time with lots of autistic adults and how you did surprising things too like riding on a Dalek.

But Blob Thing is adamant.  The recent adventures must be told.  Now.  NOW.  NOW!  He also says that his person should write about them too because sometimes she writes different things and somehow seems to have had an entirely different adventure even though they were together.  Like the person said - there are seven billion realities from seven billion people and each one is slightly different yet all are true.  Blob's person is surprised at how different her reality is from that of Blob but maybe both are true.

So what is Greenbelt?  It's a festival.  It has changed its description over the years.  It was once a Christian festival.  Then it became a Christian arts festival.  The website now says that "Greenbelt is an arts, faith and justice festival with a long and rich history."

Simply.  They are the kind who Blob's person and creator can safely be with.  Blob's person says that the whole event was a special time because it was a few days in which she and Blob's creator were not stared at by people.  It was a time in which they fitted in because everyone fitted in and everyone accepted everyone else.  They both get stared at a lot.  Blob's person can cause people to stop dead in their tracks.  She hopes that those people won't ever stop dead in the road and get mown down by a large juggernaut.  At Greenbelt people didn't stare.  At Greenbelt things were fine.  Straight people.  Queer people.  Hippies.  Goths.  Steampunk lovers.   Theists.  Nontheists.  Atheists.

It's safe to say that Blob's person enjoyed herself.  Blob and Winefride loved it too and had plenty of adventures.  Only some of them were photographed because everyone was too busy for photos.

Today Blob wants to talk about the journey to Greenbelt.  Because even on the journey there was cause for adventure and surprise.

It was a very long journey.  So long that it began the day before.  Next year - because Blob wants to go back to Greenbelt - the journey might be a lot quicker because Mister Chris said that he should travel down with a group he comes with each year from Sunderland.  Blob would like that.

The journey began by travelling to Manchester to stay with Blob's creator overnight.  Then everyone had to get up very, very early.  Blob didn't want to get up and he was quite worried that Winefride might have a meltdown because she's not used to the early mornings.  Thankfully she took it all in her stride and was ready to leave for the festival before anyone else had a chance to put their shoes on.  It wasn't just because she hadn't got shoes to put on.  She was just there waiting and humming to herself.  Winefride likes humming at the moment.  Blob thinks that she should be exposed to all kinds of music so she can find what styles she likes the most.  And he likes it when she hums.  It's sometimes a bit of a drone but sometimes it's quite melodious.  Maybe she should be shown some simple musical instruments to play.  A bit of percussion or something she can hit and make notes.  Yes.  Blob says that would be a very good idea and is asking his person to arrange it.

Winefride was very calm as the four friends got on the bus to the city centre.  She had her photo taken on the bus and you can see just how calm and happy she is.  It was a beautifully sunny morning and it was impossible to be miserable on that bus ride.  Even Blob's person was happy and reasonably calm and she had hardly slept and was pretty scared at the idea of (a) going to a festival, and (b) going to a festival at which people talked about God.  Blob Thing told her it would be okay.  Blob's person told her too and together they did their best to calm her more and recommended following the example that Winefride was setting. 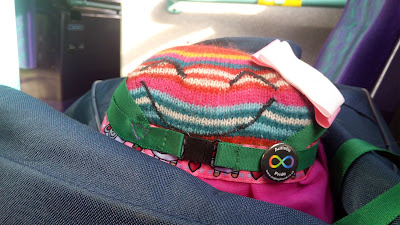 The journey was a very exciting one.  They had to travel on three different trains.  Fancy that!  Three trains.  Not just one or two.  And then at one of the stations there was a surprise adventure.  A complete surprise.  Winefride and Blob Thing met a real life elephant.  They had met sheep before - an adventure Blob told you about a month ago.  He hasn't written about his adventures with his sister since then.  They've had quite a lot of them and he wants to tell you about them all one day.

Yes.  It was an elephant.  Blob was surprised to see such a creature roaming wild in Yorkshire.  He has since learned that this is The Warrior elephant, part of a large herd of elephants that has currently descended upon a city called Sheffield.  Blob and Winefride were allowed to ride on the elephant.  He would quite like to go back and find more elephants to ride on but doubts he could find all 58 of them in a day even if he could go back to Sheffield and visit more of it than a railway station. 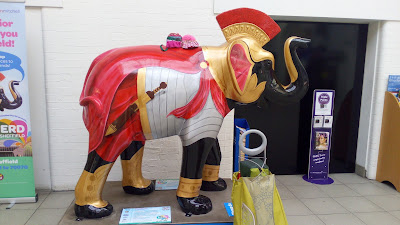 Just look at the two of them, riding proud on an elephant.  It was quite dangerous.  At one point Blob Thing fell off, all the way to the ground.  It was lucky that the ground wasn't covered in poisonous plants and that it wasn't the crater of an active volcano.  Very lucky indeed.  Blob wasn't even bruised by the fall and was able to climb back on the elephant. 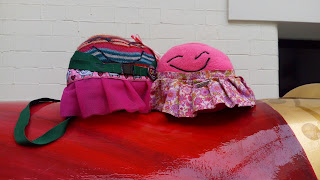 It was soon time to leave the elephant behind.  He had been friendly and Winefride had kept laughing at his impressive trunk protector.  She laughs even more than Blob Thing does.  She would have liked to have stayed longer and hugged the elephant tightly before saying goodbye in the special way she has of saying goodbye to someone she likes.  She can't speak, but at least some of the time it's easy to know what she means.

Blob and Winefride caught the train from Sheffield just in time and the rest of the journey passed happily as the scenery flashed by.  And then they were nearing the end of the journey.  Kettering 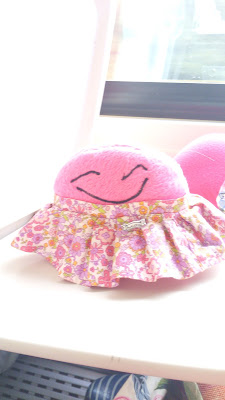 From there it only remained to catch the special Greenbelt shuttle bus to the festival.  Blob's person kept singing "I wish to go to the Festival."  She KEPT saying it.  For days beforehand.  And pretty soon she would have her wish.  The bus went a very funny way to the festival through streets that were never designed with a double decker bus in mind.  But it got them to Greenbelt eventually.

The journey was over.  All that remained was to set up the tent - thankfully in the disabled camping area which was very close to the entrance.  Blob and Winefride didn't help at all with that.  They just sat back and watched as Blob's person and his creator attempted to erect a tent which they had never seen before.  Blob thinks it unlikely that he would be able to put up a tent on his own.  On the other hand he wouldn't need a big tent so might manage it and he wouldn't have to store lots of things in it because he only has one set of clothes and is happy to sleep anywhere.

The job was done.  The tent stood proud.  Proud and only slightly wonky.

And so the four companions turned from it and headed through the festival gates.

The joys and struggles and wonders of Greenbelt awaited them.

Something completely unknown to three of them would become known.  The next few days would be wonderful.

Assuming they could all manage to survive the large storm heading their way.