Blob Thing does not have time for a blog post this morning.  It's a very strange time.  He keeps going away from home and being busy.  This is the strangest of the three recent times away.  His person seems far more subdued and worried by this time.  She's not showing it to the world and is masking some things about herself in a way that Blob Thing thinks is a bit unhealthy.  Blob hopes that his person will be back to normal soon.  Okay, not back to normal.  Some people would say that Blob's person has never been and will never be normal.  But back to what is normal for her.  Blob wonders whether there will be hoop dancing for his person next week and whether she will get herself a decent hoop and practice until she has at least one basic hoop skill.

No time this morning.  Blob and Winefride are being taken to a little place in Wiltshire soon.  They're quite excited about it but Blob's person seems quiet today and unable to smile quite as much as Winefride or to be able to happy flap the way Winefride was earlier at the prospect of another car journey.   Winefride isn't used to cars.  She hadn't ridden in one until a few days ago.  Blob can't remember riding in one either but he thinks that a car is a bit like a bus except for having less people in it and it stopping at houses rather than at bus stops.  Blob is looking forward to the view from the car.

So today Blob can't write a proper blog post.  He hopes that he can tomorrow but there seems to be so little time just recently.  Humans are so busy.  Why can't they just do important things like help soft toys to write about themselves?

Today Blob is going to share just one photograph from Greenbelt.  It's from the Sunday afternoon.  Blob's person was busy chatting with people.  Blob was happy about that because she kept telling people about him and Winefride and he got to meet lots of people.  Winefride got a bit overwhelmed by all the strangers and had to hide away in the bag for a bit and look at some of the free things that Blob's person kept collecting.  Blob has to say that his person collected a lot of nice free things at Greenbelt.  He was quite impressed by how much there was and how she was still able to fit everything into her bag when packing up - including two new coats and three new hats which will look completely stylish in winter.  They might be the style of a crazy person but they'll be stylish. 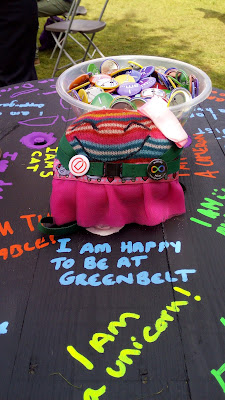 This picture is of Winefride, not of Blob Thing.  Blob wants to point that out in case anyone gets confused.  She is his sister and he loves her.  He wanted to say that too.  The picture sums up the overall Greenbelt experience.  Happy to be there.  Blob, Winefride, Blob's person and Blob's creator all want to go again next year too.  Blob also wants to point out that Winefride is not a unicorn but that it's fun to pretend sometimes.  They didn't meet any real unicorns at Greenbelt so maybe someone else was pretending too.   Isn't Winefride gorgeous?

Blob Thing hopes that tomorrow - or whenever he can write a full post - he can tell you all about the rest of that Sunday.  Some of it was difficult.  Some of it was blissful.  It was to be a day that was hard to cope with but which then didn't end until nearly two o'clock in the morning which is far past everyone's bed time.

Wiltshire beckons.  Another county for Blob to visit.  He doesn't think he'll ever visit all the counties of England.  His person has been to them all - although she doesn't remember Norfolk because she was only a few months old and she only entered Cornwall for a few hours.  Blob wonders where his future will take him.  He had never expected to be visiting Wiltshire or to be doing all the other things he does.  He's still hoping that before leaving Sussex he has time to go to a big park and see animals there.  Blob's person hopes they can do that too.  Winefride is wild about the idea and hopes that they can see the baby meerkats.  You can just see her face light up when Blob mentions them and she squeals so loudly with delight that everyone has to laugh.