Blob isn't going to write much today.  He's finding it hard to focus being down in Sussex and at this point would much rather be with his friends.  Winefride is finding it hard too.  She's getting quite bored and it's left to Blob to do the looking after.  Blob hopes that she can come out on an adventure soon but his person keeps being busy and doesn't know if any of the busy people would want to go out on adventures with soft toys.  Blob also hopes that they can all escape soon and go out and see the animals.  Maybe today after all the other silly human jobs are done.  Blob says that humans spend a lot of time worrying about meaningless things and collecting meaningless things.  He doesn't understand humans sometimes.  Then again, his person doesn't understand them either and she is a human.  Blob and Winefride are very glad that Portal is here too because Portal brings a little bit of soft toy sanity in the place.  Even Portal is looking forward to being somewhere else.

Greenbelt was going very well but it was Sunday morning.  Everyone knew that would be a harder time due to the lack of things going on.  Grief.  Blob is finding it very hard to write while here.  It's not a comfy writing place for him.  Not comfy at all.  He's not going to go into the reasons why but you can probably guess some of them.

Blob said in his last post that he didn't want to go to the big communion service at Greenbelt.  Lots of people did go and they seemed to enjoy it.  But Blob didn't want to go.  However, on his way to breakfast that morning he and his companions met some very friendly people who were on their way to the service.  They were incredibly tall for humans and were from another country.  Blob and Winefride didn't quite take in what country they were from but they had their pictures taken anyway. 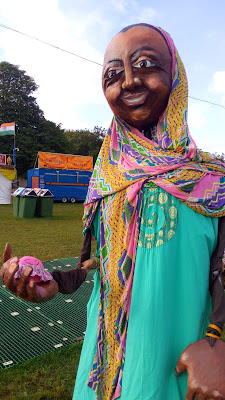 He thinks that the two people were refugees who had come to the United Kingdom not so much to find a better life but to escape a terrible one.  He knows that refugees have often escaped from horrendous situations.  None of them wanted to leave their countries.  They just felt they had to because their lives were so bad.  Not just through poverty.  Oh no.  If they were just poor people coming to Britain to get richer then that would be an entirely different situation and Blob would have preferred them to stay in their countries and some help given to build better financial and economic lives there.  That seems sensible.  It's not that simple though.  Refugees aren't refugees from poverty even though many of them were very poor indeed.  They are refugees from war, hatred, oppression, injustice and a whole range of awful things.  They had to leave their homes, their lives, and head off on a long and difficult journey.  Blob Thing is very glad that he has never had to be a refugee.  He might moan about how hard it is to write a blog post today but that's nothing compared to the lives these people have lived and the lives many still live due to not having been granted refugee status. 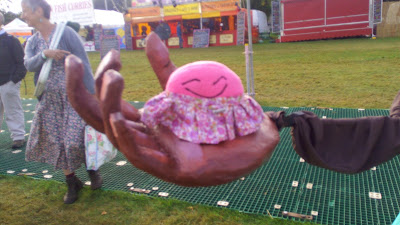 Blob had met refugees before and he was very glad to meet some more at Greenbelt.  They were ever so friendly and smiled almost as much as he and Winefride does.  Blob doesn't know how much Winefride understands the refugee situation.  She was pleased to meet the people and swung wildly on her reins as she was held and she giggled so much it's a wonder that the entire Greenbelt festival site didn't hear her. 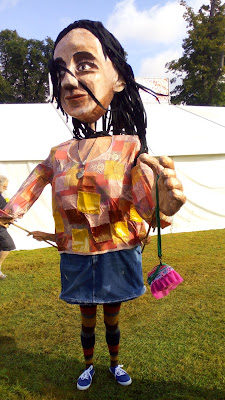 After breakfast, Blob, Winefride, Blob's person, and his creator had a plan.  It wasn't mentioned in the main programme but Blob's person had seen that one of the tents would still be open and that they would be able to sit there and do some art things.  It was ever so good.  The people in the tent gave them all free cups of tea.  And then someone from another tent passed by and gave them all more free cups of tea.  Out of fairness to those people Blob has decided not to say which were the better cups of tea.  He was pleased to have received both drinks. 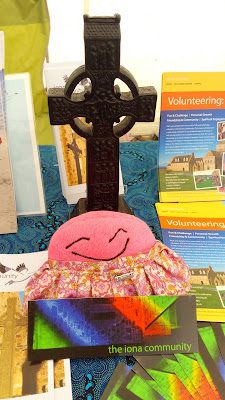 The tent contained lots of information about something called Iona.  Iona is an island off the west coast of Scotland.  Blob is now asking when he and Winefride can be taken to Scotland because it looks really close on the map from Newcastle and they have never been.  Blob's person says that it's quite expensive by train and takes a long time to get to on the bus but one day they will get up early at the weekend and go all the way.  Blob's person says it's more than a hundred miles to Edinburgh and even going by train would take quite a long time.  She hopes that one day early next year they can all go there on the train for free because she hopes to have a medical appointment there.  She has been hoping to have that appointment for a very long time but the powers that be keep not allowing her to have it even though she has been legally entitled to it for well over two years.  Blob's person has to be very patient.  Sometimes she doesn't care about it all.  Sometimes she's pretty unhappy about the whole thing.  Sometimes she doesn't even want the treatment that the appointment would eventually lead to and wonders what the point of it is.  Blob wants her to stop talking about it now.

Iona contains a Christian community.  They always seem to be quite nice people and they sing lots of nice songs.  Blob wouldn't want to be part of the community though.  They all have to read the Bible a lot and they have to keep praying and praying and praying and using liturgy addressed to the sky God he doesn't believe in.  Maybe some of the community members don't believe either.  They just use the liturgy.  Blob keeps reading about such people and he met some more at Greenbelt.  People who don't believe in a sky God but use long prayers addressed to the sky God.  Blob doesn't quite understand how people can do that.  He knows that there are ministers who don't believe in the sky God and lead prayers in every service addressed to the sky God.  Blob doesn't think he would be able to cope with doing that if he was a minister.  He would have to use prayer forms that removed the language of such forms of theism.

Iona people are nice though and later in the weekend Blob and his person would attend two Iona services.  Blob's sister and his creator would be at the second one too.  There was ever such a lot of singing in that and it was enjoyable.  Blob's person likes singing and it makes Blob happy to watch her enjoying herself. 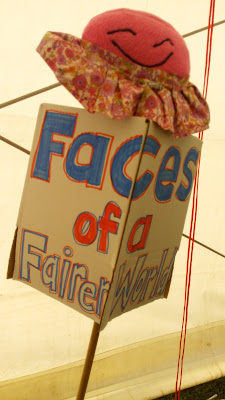 The piece of paper Blob's person had read was true.  There was art to be done in the tent.  It was called the Northern Lights tent.  Iona is a long way north.  It was a bit confusing for Blob though because he got taken a couple of times to a church in Newcastle called Northern Lights and the tent didn't have anything to do with that church.  Blob's person had to explain that more than one thing can have that name.  Blob met a few people from that church at Greenbelt.  There are people from that church there every single year and they're all pretty nice too and some of them don't really believe in a very orthodox Christian God.  One woman in the congregation does believe in a sky God but not in the normal Christian story and she rewrites all the prayers and liturgy as she goes along and says different words to everyone else.  Blob's person has been known to do that too.  Not that she goes to church much now.  She attended more church things at Greenbelt than she had in the previous six months and she didn't join in with a single spoken prayer in a service.  It's lucky there isn't a sky God who created an eternal hell or she would be doomed and Blob would be doomed too and his fur would keep getting singed for eternity. 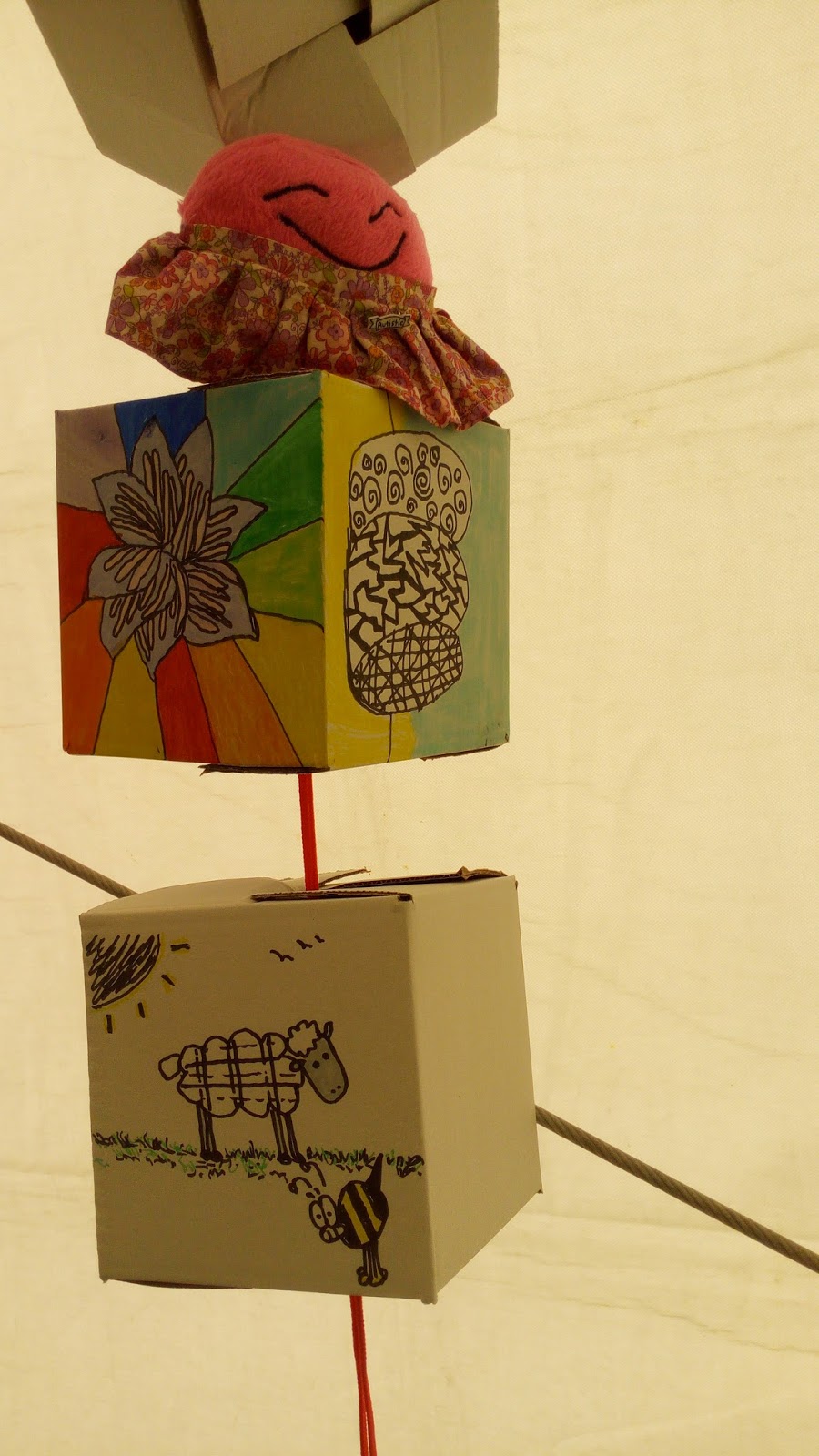 The Iona people had a plan.  They had a lot of spare boxes.  And a lot of pens.  The boxes and pens would be combined.  People could decorate the boxes with things to do with justice and inclusion.  That sounded like fun.  More fun than listening to sermons and sitting around while a thousand people shared bread and wine (or blackcurrant). 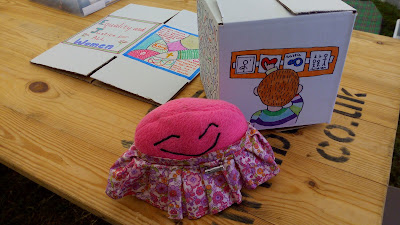 Blob's person and his creator got to work and they managed to create some nice things.  Blob's creator managed to decorate an entire box which she left behind for the display in the tent.  Blob's person only managed to decorate half a box and she took it away to complete at home.  She hasn't completed it yet.  But in part that's because she isn't at home.  Blob hopes that she will finish her box when she gets back there. 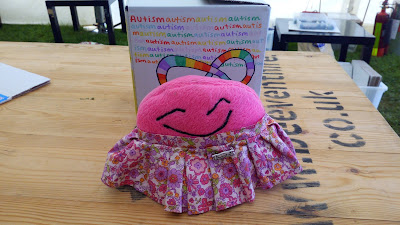 After their time in the tent the four companions moved on.  Blob's creator and Winefride went off to do some things and Blob and his person went off to do other things.  Blob's person still needed to change into clean clothes and that seemed the most urgent thing to do.  As they passed the Big Top and the communion service, which still hadn't finished, Blob heard Justin Portal Welby talking.  He must have said something very funny because everyone laughed.

So that was the start of Sunday.  It was going to prove to be a difficult day.  Blob's person wasn't coping well for quite a lot of it and he had to look after her a lot.  By the end of the day things were wonderful again and that was a big surprise.  Blob's person would be totally surprised by her own actions and by how things turned out.  But that's a tale for another blog post.