Blob Thing didn't manage to post anything yesterday.  He and Winefride had a very long day which got longer than they had hoped.  They had to accompany Blob's person to Sussex.  She is visiting her parents' house which needs to be cleared and sold and she is very anxious and stressed about the whole thing.  She was much too tired to help Blob with anything last night so he couldn't write his blog.  So he missed a day.  Blob wants to apologise but he stresses that it was entirely a circumstance not of his creating or his control.  He hopes that he will be able to blog every day while he is away from home but he doesn't make a promise.

Blob's first day at Greenbelt had been very exciting.  He had done lots of fun things and met lots of people who he would probably never see again.  And he had survived a storm.  Now it was time for Blob and his person to be reunited with his sister and his creator.  They had half planned some more activities to do once they had eaten food.

Before food Blob's person and creator met up in the Playhouse.  His creator had been watching a performance called Smash It Up.  Blob's person might have seen it all had she not been sheltering from the storm at the other end of the festival site.  As it was she only saw the end of it which wasn't enough to understand it.  But that was okay.  She was glad to have been able to find Blob's creator again in time for dinner and the planned evening events.

The first of these was in a place called Canvas, an open air area with a canvas roof.  They were going to a Sufi / Rumi session.  Someone was very kind and gave Blob's person and creator seats to sit on.  Both of them like Rumi and Blob's person has quite a few books of Rumi's poetry.  Blob wants to point out at this point that his person hasn't actually read the books yet, just browsed some of them and that she should stop buying books and read what she has.  Blob knows that the chances of that happening are nearly zero but he feels it would be a good idea.  Blob's person wishes that he would stop pointing out the silly things she does.  But she knows that the chances of that happening are also nearly zero.

The first part of the session was very interesting as the two people leading talked about Rumi and about Sufi beliefs and practices.  But then the session got a lot more practical.  Everyone was to chant one of the 99 Beautiful Names of God for a while.  And then another of them.  99 times.  Blob's person and creator weren't up to that.  Blob's person likes the names and Blob likes the few he has heard.  If he was using them of course he would have to change them because they are 99 names of a sky God and Blob doesn't believe in a sky God.  So where the names would say something like "God (Allah) the merciful"  Blob would have to say "God who is mercy."  That allows people to still be theists but also allows someone like Blob to move away from theism into nontheism, theopraxy, or even atheism.  Blob's person is quite into the theopraxy idea but may be stretching it even further to a statement of "whenever you are merciful you both express and create that which is God."  God thus ceases to be a being, and instead becomes Being, a way of being.

It's not a radical idea.  There would have been quite a few people at Greenbelt who said - or at least privately believed - quite similar things. Blob's person talked for a while the next day with an Anglican nun who said that she had given up believing in the sky God years ago.  Talk about radical!  The late David Jenkins said some things while he was Bishop of Durham that had conservative Christians up in metaphorical arms.  Blob's person didn't like those things at all and thought it terrible that such a man with such beliefs should be raised up to be a bishop.  Blob's person has changed a lot since then.  Blob is glad.  He would find it very difficult if she was to keep preaching to him about the need for conversion or about how Jesus died for his sins and only the blood and intercession of Jesus could ever keep him out of going to Hell.  Blob Thing may have been influenced by his person in this but he firmly believes that the whole idea of an eternal hell to punish people for real and imagined offenses and offensiveness in a single lifetime to be one of the most horrendously disgusting religious ideas ever.  Thankfully a lot of Christians don't believe in that idea any more or in the idea that every single person is inherently sinful.

Blob didn't want to sit and chant the names either.  And Winefride was obviously very impatient to leave.  So the four companions just got up and left.  No guilt.  Nobody should ever feel guilt about leaving a religious thing.  And that's another topic Blob could talk about and which his person could express from her own experiences.  Not today.  They left Canvas and didn't know what they were going to do to fill the next bit of time.

But then they passed Grove, where Blob had learned about the Jesus Fellowship earlier in the day.  A dance workshop had started and it looked.  The man who was leading it, Andy Raine, lives on Lindisfarne and helped found The Northumbria Community.  So he's connected with two of the nice bits of British Christianity.  The dances were simple and friendly and they were very fun.  This was far more Blob's kind of thing than chanting the 99 Beautiful Names.  Blob's person enjoyed it too and decided that she needed to do more dancing in Newcastle.  There's a wonderful dance event happening there in a few days but unfortunately she won't be there and will have to wait for another.  Newcastle has quite a few wonderful dance events for people who have no flexibility, no stamina and who have no clue about dancing.

Everyone enjoyed the dancing in Grove.  They didn't mind that the ground was a bit muddy from the storm.  Everyone smiled except when they were meant to be expressing pain and brokenness and dancing to one of the more depressing songs of Leonard Cohen.  That was the first time that Blob's person has ever danced to a Leonard Cohen song.  She has listened often.  She has sung often.  But never danced.

After the dancing Blob's person and creator had a definite event booked in their diary.  On the way Blob spotted a forest sculpture.  Some people make pictures and art from found materials when they're out and at Greenbelt there were some interesting pictures and patterns in some places.  Blob thinks that most of them were done by people involved in Forest Church or by people who went to workshops led by Forest Church.  He really liked the one he found and asked for his picture to be taken. 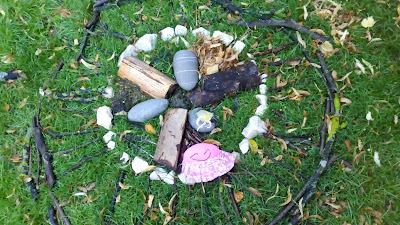 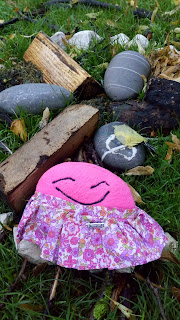 They left Grove in a hurry because they wanted to join the queue to go back to Playhouse.  There was going to be a play called Grandad and The Machine.  The was billed as a "brand new steampunk fairytale for adults."  It was very enjoyable and Britain was not destroyed.  There was music and chases and Zeppelins and all kinds of good things.  Blob and Winefride enjoyed themselves a lot.  Winefride hasn't been to proper theatres before.  Blob has been several times and likes it.  He saw The 39 Steps which was very funny and he saw The Night Watch which wasn't very funny at all.

After the play Blob's creator was tired and wanted to go and rest.  Blob's person refused to rest.  She had bought a festival ticket and was determined to use it as fully as possible.  After sharing a cup of tea, Blob's creator went off to bed and took Winefride with her.  Winefride had enjoyed the day a lot but she needed to rest too because at times it had been quite overwhelming.

Blob wandered off and took some photos, continuing to explore the site.  A brass band were playing some great music in the Big Top but Blob's person knew that she would never be able to get in there and enjoy such loud music or dance to it.  Oh no, she would never be able to do that.  Her head told her that she wouldn't.  Blob doesn't necessarily believe in believing the things people's heads tell them.  Blob is wise! 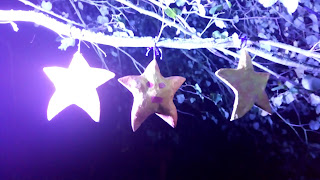 Blob's person walked back to Grove.  A man from the Forest Church movement was going to lead a session about the stars.  The description said "put on the dark and see the stars."  That sounded amazing.  But it was still completely cloudy after the storm so nobody saw a star.  Instead the man led a talk which included quite a lot of science.  Blob's person didn't stay for the whole talk even though it was quite interesting and she learned that Ursa Major is not a constellation. 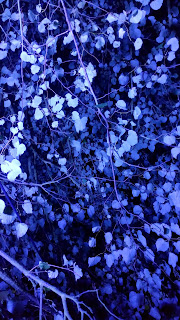 So Blob and his person wandered again until they came to canopy.  They listened to the last part of a comedy night and during that time they spotted an old friend of Blob's person.  He was easy to spot because he was the only person still standing after a set of questions the first one of which was "Are you female?"  Blob's person doesn't think her old friend is female and doesn't quite know why he was still standing up.  But it made him easy to spot and it made people laugh. 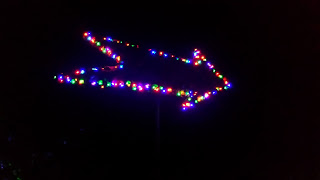 Together they walked and talked and headed to a communion service.  Blob's person left the church this year and so wouldn't normally go to a communion service.  She wasn't going to participate in this one except by singing the hymns quite loudly.  She sang the last one loudly in Welsh because the service sheet said she could but didn't hear anyone else singing the original Welsh words.  It was a special communion.  The Outerspace Eucharist.  It was aimed at LGBTQ people.  Apparently they could come there with "no need to hide from God."  It's very sad that such a thing has to be said even at Greenbelt.  There is truly no need to hide from any God on the basis of sexuality or gender unless your God is a ****.  [Blob, don't swear like that!]

At the service Blob's person met some people from the church she used to attend and afterwards they went off together to the all night cafe.  Blob's person needed to eat something because she was quite hungry and she needed to sit somewhere for a while before attempting sleep.  It was then that she discovered the carrot cake in the cafe.  She would discover it again several times over the course of the weekend. 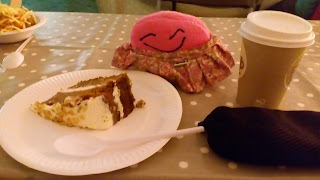 And so to bed.  Blob got an excellent night of sleep.  Blob's person did not.  Another day was coming and Blob wondered whether it could be as exciting as his Saturday had been.