Blob Thing Enjoys Himself Walking By The Canal To Salford

Hey.  My person is a bit silly!  She's got the title of this post wrong and she's not letting me change it.  There might be pictures of Salford here and we might have ended our walk in Salford but we didn't get there in this part of the day.  No.  We didn't realise it at the time but we got to Trafford in this part of the day.  And that's a totally different thing.  My person is excited.  She's discovered a 57 mile walk round the outskirts of Salford and she wants to explore it.  None of the walking I will tell you about today was inside the outskirts.  It was Trafford.  We went back to Trafford last week and my person took a photo of a green telephone junction box.  That was a good evening.  I got mentioned in a talk at an autism event.  I don't think it'll make me famous and I'm not sure whether I would want to be famous anyway.  It seems like a lot of hard work having to deal with strangers wanting to talk to you all the time.  I think I'd get overwhelmed and I don't know how Winefride would cope with it all or whether everyone on Twitter would be kind to her.

There are good people who use Twitter.  And there are mean people too.  I saw some things that a Republican candidate to be President of the United States of America wrote on there and I was quite shocked.  He seems to be a very mean person.  I saw him on television too and one night when my person had insomnia I heard him in a debate.  It makes me sad that people still want this man to lead their country even after all the mean things he said about all kinds of people.  It seems he reserves nice words mainly for members of his political party and not for people who disagree with him or have a different coloured skin.  I called my person a meany bum for not helping with my blog enough.  I take it back.  It's that horrible man who is the real meany bum.  His meany bum is so big I am surprised there is any chair in the world big enough that he can sit in it.  As for skin. Well, I've got fur.  And my fur is one colour.  Winefride's fur is a different colour.  What does that matter?  It doesn't change the way I love her and it would be a totally crazy thing if it did.  We're different.  But we're not superior and inferior and we're not inferior and superior.  That's what I say and I'm sticking with it and if anyone disagrees they'll have to argue with my person because she agrees with me.

But my walk.  Oh yes, I was walking wasn't I?  I am quite glad that man wasn't walking with us.  I think I would have had to tell him to shut up lots of times.  There are other mean people.  It's not just him.  I saw some a few weeks ago in Newcastle.  Some openly racist people had a march and said some very nasty things.  Unfortunately the not racist people who also had a march said some very nasty things too and I was in tears about it all and we had to block Winefride's ears and hold her tightly all evening because she was so upset that supposedly nice people could scream in the streets of Newcastle and encourage human beings to kill themselves.  My person says she isn't going to go to the rallies and marches any more because she got very upset by it too.  When the nice people become monsters what hope is there?

At least I can still walk.  And I can smile.  And I can sing, and dance and write and play and find divinity and beauty and think of the thousands of good things that still happen.  We watched a man playing the piano and singing on the internet last night.  He said to think of the good things and sometimes to switch off from the bad.  He then said that we should be creating the good things.  I agree.  As a small pink soft toy I'm not in a position to create very many but I want to create some.  And experience others.

That day was full of good things.  Here's one of the good things:  My person was smiling.  Here she is, at the start of our canal walk.  We're still right in the middle of Manchester.  Not far away are big railways and big roads but this place was quiet. 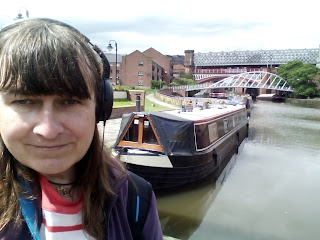 My person is telling me to get on with it because she says I talked too much about that meany bum American person.  The next picture is of me.  I had to be held very carefully because there was nothing safe for me to sit on and I didn't want to fall into the canal.  It's not a very good picture but my person says it's quite hard to hold me and take a picture of me while making sure the camera is straight and making sure to press the button without changing the angle.  Personally I think that just means she needs more practice.  Lots more pictures of me please.  And lots of pictures of Winefride too.

Hey, yesterday was good.  First we got taken to a cafe because my person could get us some cake for free.  And then we got shown round a multilingual library which was a brilliant place.  She got photo practice there and I'll be blogging about it soon.  My person says that next week she will go back and join the library because it's such a good thing and also because it would be a quiet place to sit when she gets too overwhelmed in town.  It's near an art gallery shop too and she's promised to take us there soon.  My person doesn't like being in shopping malls but that little section is quite nice.  The library did have some quiet music playing.  That's not normal for libraries.  My person says it was by Kathryn Tickell who is a local woman who plays Northumbrian pipes.  She says we have some of her albums but she's not playing one now.  She's currently playing, yet again, The Four Seasons by Vivaldi.  But this is the version by the Jacques Loussier Trio.  I like it too.  I think Winefride would prefer something playing that's easier to dance to.  She loves dancing to music.  This is good to sway and rock to and to close your eyes and fall into but it's not good for wild dancing.  We danced to the piano player at Greenbelt.  I still need to finish blogging about that.  I got half way through and then we kept going away and my not meany bum person kept not being able to help me with my blog and then I didn't get back to it.  I hope we go again next year.  We need to book.  One disabled person.  One carer.  And two soft toy tickets.

Oh yes.  This next picture is of me.  Aren't I wonderful?! 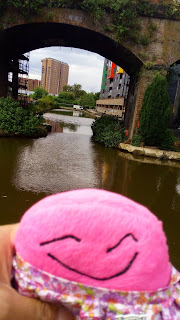 Then we started to walk along the canal.  I like this bridge picture.  I like bridges in general and I think I want to see more.  It's amazing but my person still hasn't taken photos of me with all the bridges crossing the Tyne in Newcastle.  I have photos of myself and bridges on the Wear, except for that one which doesn't yet exist.  But not the Tyne.  Except for the Millennium Bridge.  We took photos of that a while ago when we all went on an adventure in the Baltic art gallery and I nearly fell into an eternal pit.  There I was nearly falling for ever and my person just smiled and took pictures.  Can you believe that?  I think my person wants to use this picture for her blog too.  But I got there first. 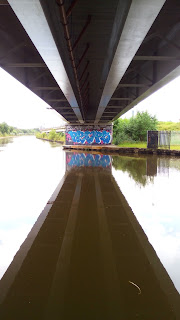 We're walking into Trafford in this photo.  Trafford.  Not Salford.  We're already past the point at which my person made sandwiches and dropped them in a puddle on the towpath and had to leave them for the grateful birds.  It was being a lovely walk and we weren't getting wet either which pleased me.  I am glad my person did not decide to jump across to the other side.  I don't think she would have made such a daring leap and then we would all have got very wet. 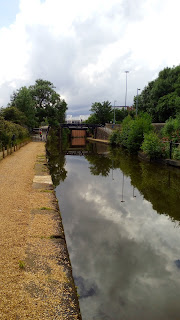 Yes.  We were in Trafford.  We didn't know that then because our Greater Manchester geography knowledge isn't very good.  But we could see Salford.  Here's some of it across the water.  All those buildings are in Salford Quays.  People look at Salford Quays and think that Salford is a posh, upmarket place now.  It isn't.  Just bits of it.  There is a lot of deprivation in other parts of the city and a lot of people are struggling in big ways.  The Quays are posh.  A public face of investment and that's good.  But the money hasn't quite trickled down to the poor estates, including ones very close to the Quays.

You can see from these photos that the weather wasn't being perfect.  It was very pretty though.  You should have been there.  Unless you're reading this and you're that presidential candidate I was talking about.  Then you shouldn't have been there because you would have only spoiled things.  You won't make America great again.  And you wouldn't make Salford of Trafford great either.  I'm glad you weren't there too if you're a vocal supporter of that man.  You would have spoiled things too.  The quiet of the water and the amazement clouds can produce should not be spoiled with racism, sexism, homophobia, xenophobia, or any of the other things I've seen that man display.  Sorry.  I'm talking about him too much aren't I? 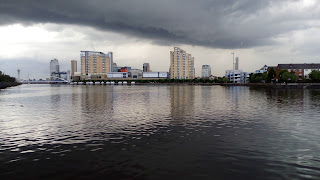 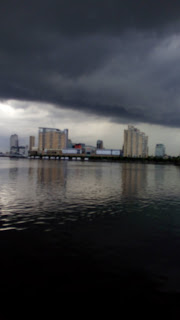 Big clouds!  And it was starting to rain a bit.  But I'm Blob Thing.  And I can still smile and enjoy myself.  I was a little worried because if it rained too much then I would have had to go and stay in the warm and dry bag and I'd miss things - including everything in my next blog post.  I didn't want to miss out on seeing it.  Here I am near the water and behind me is Salford.  I wasn't in Salford.  No.  I was in Trafford.  Don't forget that.  It's important to me.  Even though it wasn't important enough on the day to know where I was. 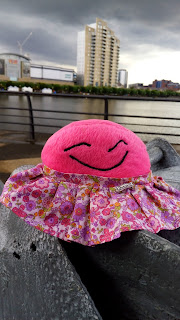 Here's my person again.  I don't need to talk about this photo.  It's of my person.  That's all I need to say. 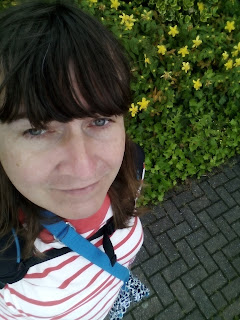 And this last picture is of me sitting on a big wheel.  We were entering an industrial area and I was going to have a fun adventure there.  I hadn't expected that.  Or that I would drive a tank before finally crossing the water.  That's what I said before.  If you don't know where you're going or what's there then sometimes the surprises can be stunningly wonderful.  I'll tell you all about my industrial adventures next time.  Not Greenbelt.  That will have to wait. 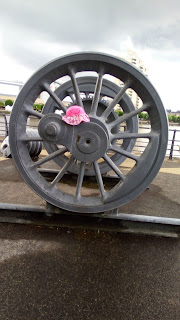