My person is letting me write something today.  She's been busy for the last few days.  I'm quite proud of her because she's made a lot of progress in the last year.  On Saturday she went to a writing group in Sunderland.  She would never have done that a year ago.  She wouldn't have gone to anything for writers because she didn't know she was one.  She's learning.  My person shows that even in old age people can learn new things.  [I'm not old Blob, that was a bit rude.]  Sorry person.  But you have to admit that you're much older than I am.  I'm not even a year old.  I hope I have a party for my birthday.  It's on December 31st.  If anyone wants to send me cards and presents or even a nice little message then that would be wonderful.  My first birthday.  Put the date in your diary now, it wouldn't do to forget it.  My person is MUCH older than I am.  I'm not going to tell you how old she is but her age is in double figures.  Yes, she's that old.  Isn't that amazing?

And my person came back from the writing group with some more material to play with.  Not velvet and satin.  Don't be silly.  Not that kind of material.  Word material.  Between moving large mahogany sideboards, drinking tea and eating too much of her liquorice sweets, she got enthusiastic about an idea that was formed in the group.  So my person took herself off to be alone a few times and she's started to write a monologue.  It's not something she's ever done before.  She hasn't ever written a thing as if someone else was talking.  It's a new adventure for her.  And I'm proud of her for trying it.  So far she's written 4,500 words which is about enough for 25 minutes of speech.  She doesn't know how fast her character is talking.  She's quite enjoying it I think although she needs a rest after writing each part.  It's all about a murderer.

This isn't some comic short about someone eating the washing.  I liked that one.  It was funny.  I think someone should find it and make it into an illustrated children's book.  I'd buy a copy.  I would.  Except I haven't got any money.  Maybe I need to take that up with my person.  She should give me pocket money.  Winefride too.  It's not that we need lots of things but sometimes it would be nice to have the choice and have our own money to spend when we're in a charity shop or see something pretty.  She's typing all this of course so the seed is planted and maybe she'll come to us next week and pretend that she invented the idea all by herself.  This morning I think my person needed not to think about her fictional killer for a while and that's why she came rushing to me and said "Blob, let's go write a blog post for you."  I suppose I should start writing it now.

We left the big library in Manchester and started to walk along a big and busy road called Deansgate.  I think in the past Manchester had big gates to get into the city and each gate was for a different type of person.  I think Deansgate was the only place the original cathedral deans were allowed into the city.  If they had tried to come in by another gate they would have been shot by archers protecting the city.  Greater Manchester had some very specialised gates didn't it?  They must have needed a lot of gates unless there was an "Everyone Else Gate" somewhere.  But can you imagine the furore if a dean had tried to enter at Bishopsgate?  It would have been a catastrophe if he had succeeded.  The entire system of church government would have been destroyed and there would have been such big riots in the street that the entire city would have burned down.  No wonder they shot arrows at the cathedral dean.

Of course, bishops weren't ever shot with arrows at Deansgate.  That would just be silly.  At Deansgate there were soldiers armed with swords and their job was to chop the heads of any bishop trying to enter the city through the wrong gate.  There was one time when three visiting bishops from Derby tried to use Deansgate and for the sake of the church two of them accepted their deaths graciously - bishops believe in grace - but the other one escaped and rode on his horse all the way to Chester.  There was almost a big war about it all and it was only at the last moment that the Archbishop of Canterbury intervened by pointing out that the Battle of Manchester-Chester was a rubbish name for a battle and anyone involved would get laughed at.  Peace prevailed and it was decided after much negotiation that the rules about who could use a gate would be relaxed.

The gates aren't there anymore but there names survive and I think somewhere there's a memorial plaque commemorating the two bishops who lost their lives.  The soldiers who defended the gates had to retire of course and they became travelling folk singers and one became a dare-devil who was the first person to ride down High Force in a barrel.  The folk singers split into two camps at that point.  One group sang a song about the bravery of the man.   The other sang a comic song asking why anyone would be crazy enough to even think about riding down a waterfall in a barrel.  It was lucky they had all had their arrows and swords confiscated as part of the Treaty of Bishopsgate or things might have got difficult.  As it was, the worst that happened was one of the singers getting a bad bump on the head when they were struck with an errant hurdy-gurdy.

Greater Manchester had some other gates too.  I'm sure Bishopsgate and Deansgate can't have been used much because there aren't many bishops and deans to use gates.  But on the way to Bolton there's a gate that wasn't used once in three hundred years before being destroyed in a fire that many suspected was started deliberately by a bored guard.  This was Moses Gate.  It was built for Moses.  The man in the Bible.  If ever Moses passed through Greater Manchester he would use his gate.  Of course, he never did pass through.  Because he had died.  A long time ago.  And if he had passed through Greater Manchester he would have stuck to the main road or possibly ridden down the river Irwell in in basket.  Winefride and I had an adventure by the Irwell just nine days ago.  I'll tell you about it sometime.  I don't think Moses would have used his gate at all.  And then there's Didsbury.  That had something called the "Gates to Hell."  I wonder how many people used that one.

So I was on Deansgate.  I think I got the story right.  I was as accurate as I could manage anyway but if I got any part of it wrong you can correct me.  I'm glad the original gate isn't there now because then my person and me might have been shot with arrows and that would have made me sad.

Nobody shot us!  My person wants to go back and take lots of pictures.  I made her take these two pictures of the street.  It's very big.  Very busy. 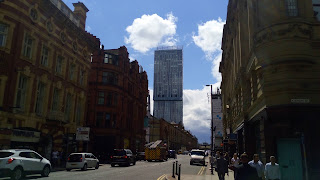 The big building is Beetham Tower.  It's got 47 floors.  That information seems to please my person a lot.  It's currently the tallest building in Manchester and can be seen from miles away.  It won't be the tallest for very long.  It might be the only building in Britain that makes a noise that sounds like a UFO landing.  That's what someone said anyway.  I'm not sure how they know what sound a UFO makes when it's landing.  But they must know or they wouldn't have said it.  Therefore UFOs must exist.  Therefore there is intelligent life on other planets and aliens visit us here.  There's proof.  The existence of a tower in Manchester is proof.  Something like that anyway. 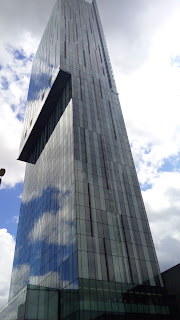 We turned off Deansgate because it was noisy and we found somewhere quieter and prettier.  I was meant to be writing about this place today but I've said quite a lot already so I need to be quick.  We found some actual Roman ruins and I got to play in them.  It was a lot of fun.  I met some sheep too but I already blogged about that.  Back then I was never allowed to dictate my blog to my person.  She always worked out the words.  I think she would like to go back to that sometimes.

This post is all about the Roman ruins but I think I've said a lot already and my person looks like she wants to go and unpack her bag from her most recent Manchester trip.  She bought herself new clothes and bought things for my creator too but she didn't buy me anything and didn't buy anything for Winefride either.  That's why we need pocket money.  So we can buy ourselves things like stylish hats and maybe a little swing to play on.  But we don't get pocket money even though we go shopping with our person lots of times.  It's not fair.

Here are some pictures of me playing in the ruins. 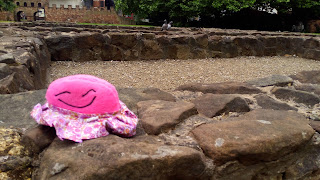 I don't think the castle is an original Roman castle.  I think it got built much later to show what Roman castles were like.  I think anyone friendly would have been allowed in these gates because cathedral deans hadn't been invented yet. 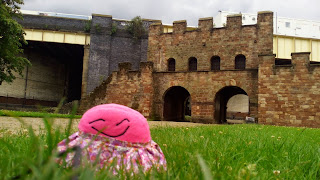 These last two photos aren't of me.  This one shows some of the ruins and in the background is a railway.  I don't think the Romans rode on electric or diesel trains.  They had caravans though.  I might be wrong.  After all, Rome has trains and that's where Romans came from. 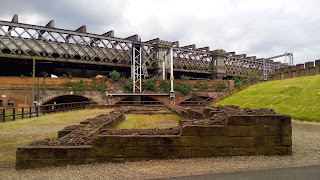 And this photo has some of the ruins and in the background is Beetham Tower.  It's much taller than anything near it.  I wonder what the view is like from the very top.  I'd like to find out one day.  I think someone should build a helter skelter all the way up the side of the tower and then charge 50p a go to ride down it and carers and soft toys should all ride for free.  Maybe it could pass through the middle of the tower half way down and people could have the option of stopping there for a cup of tea.  I'd like that.  If you know someone in the Manchester planning office please could you forward my suggestion.  Thank you. 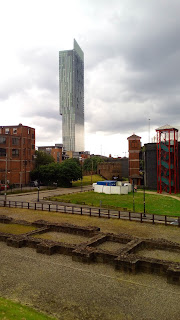 [1810 words.  I think it's likely that Blob Thing wasn't entirely accurate in his reporting of historic events.  We won't be going searching for that memorial any time soon because I don't think we would find it.]
Posted by Clare Matthews at 11:18