Blob Thing Is Forced To Shelter From The Storm In A Bar Called Barca, Manchester

Blob Thing is only being allowed to write a short post today.  He's got a little carried away with himself in the past few days and hasn't always been completely kind about his person.  So she's in control of things today and Blob isn't going to say much because his person has a life of her own.  She's also a bit cross with Blob because he laughed at her for a while earlier today.  She went all the way to Sunderland for a writing workshop and discovered she had mixed up the times.  He laughed and couldn't quite stop laughing about it quickly enough when he spotted that she was sad about it and a bit overwhelmed by things.

So a short post.  It's going to contain facts.  Yes Blob, facts.  Actual facts.  Not a flight of fancy about beheaded bishops and hurdy-gurdy bruises.  None of that was true was it Blob?  No, it wasn't.  It's all very well you telling me you wish it was true and that it would have been far more exciting if the history of Manchester included that tale.  The point is that it didn't happen.  At least his person thinks it didn't.  Blob asks her what she knows about it and is asking her how many actual books she has read about the history of Manchester.  She has to admit that she hasn't read any.  Blob wants to know how she can be certain that his story wasn't historically accurate if she hasn't read the books.  Blob's person says that isn't the point and she'll get annoyed with Blob if he doesn't behave himself.  Blob says he'll be good if he can dictate his own blog again tomorrow.  And she agrees.  Blob's smile is now broad again and he's quite excited because that means he gets to tell you all about his walk along the canal to the sculptures and possibly even to his adventures driving a tank.

Yesterday Blob eventually told you about the Roman ruins he visited with his person.  Together they wandered on towards the start of what had been their planned adventure for the day before getting distracted by book shops, libraries, sheep and Romans.  They walked down the hill to the canal, ready to walk along it as far as their legs would carry them in the time available before a dinner appointment.  Well, when you just read "their legs" it has to be remembered that Blob Thing does not possess any legs.  It's just a phrase.  Nothing was meant by it.  But Blob has rightly pointed out that the phrase does exclude some people and that in this case the phrase excluded precisely fifty percent of the people having an adventure.  Blob's person apologises and asks whether he wants another word for walk too.  Blob says that would be silly and that it can be called walking even though he hasn't got legs.  It's amazing how Blob Thing manages to propel himself and keep up with his person.  Amazing.

The area around the canal was pretty, and pretty interesting too.  Above the canal were the road and the railway as if a transportation enthusiast had been confused as to which transport should use the area.  All three seemed to be a bit excessive to Blob but he has to admit that it was quite exciting and that he rushed around and got very flappy about things because he was happy. 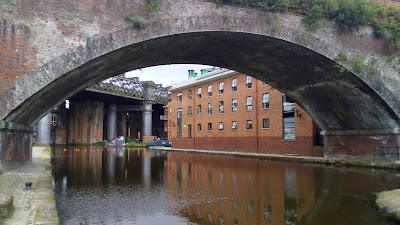 Blob's person had to tell him to calm down and when he wouldn't she actually had to hold onto him for fear that he would rush about just a bit too much and fall into the canal.  She's pretty sure she would have been able to rescue him but it wouldn't have been a pleasant experience for either of them.  Blob's person had to admit that it was all amazing and that she was very pleased to be there. 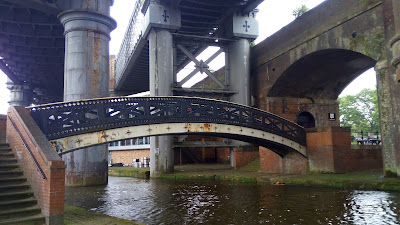 Let the walk begin!  Except, no.  Don't.  Because it was that point that - contrary to the received wisdom of the weather forecast provided by the Meteorological Office - it began to rain.  Just a bit of drizzle at first.  And then it was as if God had decided the canal was too empty and needed to be refilled as quickly as possible before he looked away and forgot about it.  It rained.  Hard.  Blob and his person sheltered under one of the bridges and watched the pretty raindrops fall  and collide with the ground and the water.  It was quite beautiful in its own way.  Blob would like to point out two things at this point.  (A)  He could have happily watched the water all day because the patterns the rain made on the canal were so very beautiful and the sound was somehow very calming.  (B) He was glad that he had spent so much time talking with Ted Roocroft's sheep and hoping for a sign of Uncle Adrian's emergency welsh sheepdogs that he was at this point able to shelter under a bridge rather than being a mile up a towpath with no hope of shelter.

Then the warm weather turned cold.  And it got windier.  And the rain direction changed.  The bridge was no longer a suitable spot for shelter.  Blob and his person were getting wet and were quickly getting wetter and they was no sign that the rain would stop soon.

It was Blob Thing who got them out of their soggy pickle.  He pointed ahead to a sign for a bar and asked whether it would be a good idea to go in there and have a drink - to unexpectedly spend some money - and wait out the storm somewhere dry.   Blob's person tried to come up with an argument against that idea.  She was worried that the bar would be too noisy or that the drink would be too expensive.  But Blob kept asking and his person finally agreed, secretly happy that she wouldn't be getting much wetter.

The two friends entered the bar.  It was called Barca.  It looked quite posh - or at least posh in Blob's person's eyes which probably doesn't mean posh to anyone else.  She was pleased because it was quiet in there, not peak trading time.  There was music playing but it wasn't noisy music and it didn't have a horribly intrusive bass line or beat.  It was some nice jazz songs and Blob's person knew she would cope better with the bar than with the rain.

She found a cosy seat to sit on - and very comfy it was too - and then went to buy a drink for Blob and herself. 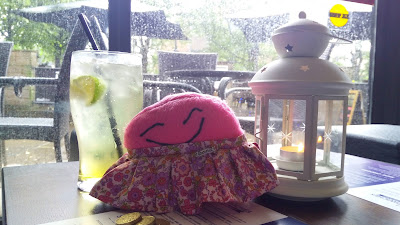 It really was very nice in Barca.  The man at the bar was friendly too and Blob was very glad that he had bullied his person to go there.  You never know until you try.  That's what Blob is saying his motto is.  Blob's person is suspicious of that because she has never heard him say that before. 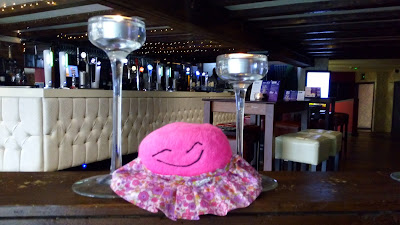 They drank their drink, listened to the music and read for a while and pretty soon the rain stopped.  Hooray!  They would be able to walk along the canal after all.  As it turned out they did get a bit wet later but nothing like as wet as they would have got in that little iota of storminess.

Blob left Barca and looked up at the sky.  How could this sky be the same one that had forced him to shelter in an unexpectedly pleasing bar?  It was a stupendously gorgeous sky and it had a heron in it too.  Blob thinks it's a heron in the photo anyway. 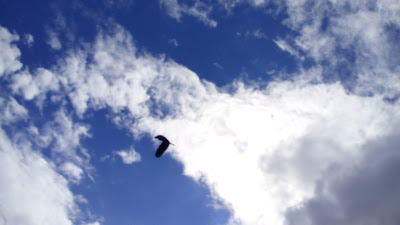 So Blob and his person walked back down to the canal.  It was going to be a good day.  They had decided.  It had already been quite a good day but together they resolved to make the rest of the day as wonderful as it possibly could be.  Nothing could break their resolve.  Not even when Blob's person made up her sandwiches by the canal towpath and immediately dropped them in a puddle.  Even that mishap wasn't going to spoil the wonder.  Not that day. 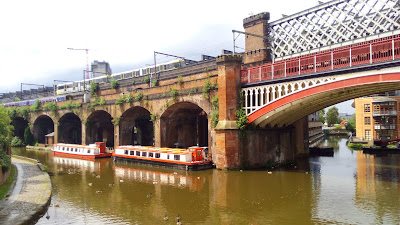 [1362 words.  Looking at my photos makes me want to post about the day myself and show off the pictures that don't contain the smiling face of Blob.  It was a lovely day and it was a privilege to share it with him.]