Blob Thing Learns The Wisdom Of The Worms In Manchester

I'm going to speak less today.  My person says so.  She says that her fingers were aching after my last two posts because I talked so much and about so many different things.  So today she's only allowing me to talk about a little bit of my adventure walking along the river Irwell.  My person wrote a blog post about the Irwell too last night, about the time she walked along a small section of it in the middle of Manchester and Salford.  Or rather, on the edges of Manchester and Salford because the river is the border between them at that point.  I didn't feature in my person's blog even though I was with her.

Yesterday I told you about a scary experience I had when I was nearly eaten by a wolf.  It was a narrow escape but I was basically unharmed.  We continued our walk along the river and I met some more creatures.

I didn't know what a worm was and my person has had to explain for me.  It was a little confusing for me because one evening I had been sitting with my person and she had been channel hopping on the television rather than doing something even a tiny bit useful.  She came to a programme and the people on it were talking about a wormhole.  Apparently that's like a big tunnel in the universe and they would go into the wormhole in one place and leave it in a place a very long way away.  I'm not at all sure that's possible but if it was I would quite like to have a wormhole so I could go to places a very long way away.  I would go and see my creator.  I would go to the seaside.  I would go to the top of a mountain without climbing it.  But I haven't got a wormhole.

The creatures I met were worms and they didn't have anything to do with wormholes.

The worms were very friendly and they slid along the ground into different positions and as they did so they invited me to join in with their sliding.  They talked to me too and what surprised me the most was the way worms talk.  When a worm talks to a small pink soft toy its words somehow appear on the ground.  That's handy.  My person couldn't hear the worms.  But she could see the words and they were seen too by the lens on her camera.

I don't want to say much.  These photos are the words of the worms.  I am with them because they were kind enough to invite me to join in with their games. 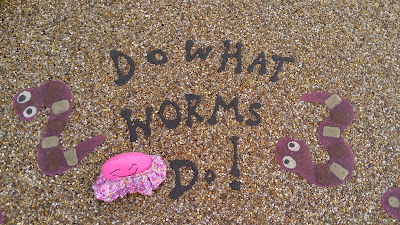 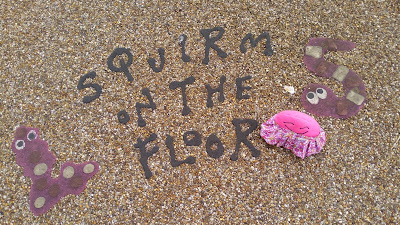 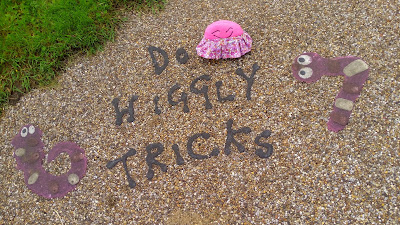 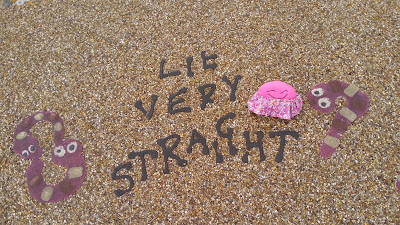 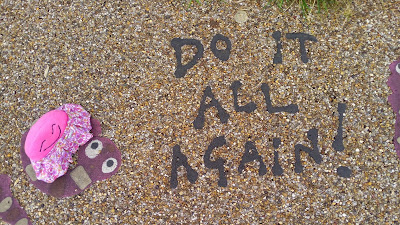 My person says that this post is more like she was expecting all the posts on my blog to be:

I could say a lot more.  My person thinks she should take the words of the worms literally.  That she should actually lie very straight or squirm or do wiggly tricks.  I don't think there's anything wrong with that.  It's a lot of fun to do these things.  Once I had sorted my photos for this post I tried to get Winefride to do them.  She enjoyed herself doing all that squirming and wiggling.  She wasn't so happy to just lie very straight and wanted to skip straight on to the "Do it all again!" section and start squirming and wiggling again.  She laughed lots and lots and is still bouncing around from the fun of it all.

It's not the end of it though is it?  There's a much deeper message to the words of the worms.  They weren't just teaching me a little game.  They were teaching me, in wormly mystical terms, of the spirituality and philosophical basis of their worm society.  It's just their worm society.  There are lots of different worm societies in the world, even more than there are different kinds of worms.  You couldn't expect full conformity between earthworms, tapeworms and the Lambton Worm could you?

The words spoken were a game in which was hidden the deepest of worm truths, shared with me.  It was a large privilege to have it all shared with me.  The profundity underlying advice such as "Lie very straight" is mind boggling.  It's one of the two statements of ideal behaviour and practice in their society.  The other is of course "Do it all again!"  The first things they said show the theoretical and mystical basis for the practical tenets.

I would love to be able to tell you all about this.  I think, five months later, I have managed to grasp at least some of the meaning of the words.  I'd love to explain it all to you as clearly as I can and help you understand the richness of the worms.

Because my person says that I have to keep my post very short.

She says I have to stop now because it's already longer than she wanted it to be and her fingers are already aching.

You can blame my person for that.