Blob Thing Remembers An Angel's Words And Freedom In Southport

I don't want to say much this morning.  Yesterday Winefride and I found six more snowdogs and we also went to see the Angel of the North.  That angel is my friend.  That angel told me some very special things the first time we met.  After meeting the angel I had been so thrilled by the experience that I got my person to write about it and together we wrote a post.  It was one of the first posts on my blog and we wrote it five months ago today.  Here it is, under this link.

I'm still not going to tell you everything the angel said to me in his special message.  But the angel was right and my life has been a lot more extraordinary and exciting than I could have dreamed all that time ago.  I think that there will be even more exciting times ahead for me and for my person.  And for Winefride too.  Five months ago I hadn't ever imagined that I could have a sister and would love her as much as I do.  I won't share that special secret message.  But I want to share again some of what the angel said to me that day:

"You're a Blob, unique.   Be proud of yourself.  Be proud of who and what you are and live your life in the wonder of your own being.  Be you, love others, and don't let anyone make you feel bad for living a life of freedom and love in whatever way is right for you.  Let go of the things you can't do.  Those things are for others.  Embrace what you can do.  Embrace your desires, your dreams, your passions and let your creative spirit flow.   If people look down on you for being a Blob Thing rise above them and know that you are beautiful, you are strong and you are as valuable as any soft toy could be."

Those are good words for me still.  And they're excellent words too for my person.  She needs to do these things better but she's learning.  She let go of something last week that she wanted to do but couldn't.  And the letting go was hard for her.  I was very proud of her for putting down something while knowing that it was a very good something she was putting down.

Today of course we're going snowdog hunting again.  My person says we're going back to Sunderland.  We were there twelve days ago hunting for butterflies and we saw some of the dogs then but now we want to find them all.  We want to see eleven dogs today and some little dogs too.  Little dogs but not Little Dog.  Little Dog lives here with us.  He's small and white and he's quite old.  I'm not yet one year old and Little Dog might be twenty-five years old.  Maybe he could come on an adventure with me one day because he's only little.

I said I didn't want to say much but then I said lots.  And I want to share some more pictures from that happy day in Southport.  It had been a very good day and I had lots of adventures.  I like adventures.  Most soft toys don't get to have as many adventures as me.  Not even the soft toys I live with.  It would be quite difficult for them all to come out on our adventures.  My person wouldn't be able to carry all of them because there are quite a lot of friends.  And some of them, like Adunno, are heavy.  He's a very heavy unicorn because he had surgery.

I was with my person and my creator in a field after we drank tea and it was so nice there.  I think it might be less nice to lie down on that grass today.  I think it would be a lot colder and the ground would be very wet.  But on that day it was perfect and we were all happy.  I played and bounced up and down the field. Before we left I lay back on the ground and looked up at the sky.  It was very beautiful. 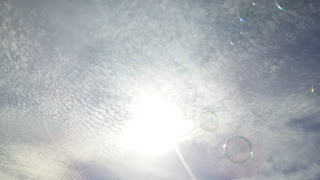 Of course, I didn't look directly at the sun.  That wouldn't have been good for me.  But my person could point the camera at the sun and that was it didn't hurt her eyes.  Can you see?  Can you see?  Ooh, ooh, can you see?  There are bubbles in that photo.  Because we blew bubbles too.  What can make a perfect moment even more perfect?  Bubbles.  That's what.

Eventually it was time to move on and we decided to walk to the sea.  But first we had to cross this big lake that's in Southport.  That was quite pretty too.  My person took a really nice picture of my creator as we walked by the lake. 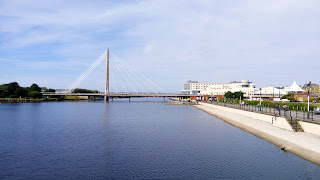 And we saw lots of birds too.  They were good to see. 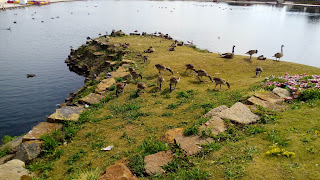 It was a long way to the beach.  I don't know why they put the sea so far away from the carousel and the crazy golf.  It's a long way.  And even when you get to the beach the sea is still a long way away.  I've been to Southport beach several times now and I haven't yet seen the sea.  My person tells me that the sea does come a lot closer sometimes and says that one day we will go there and be surprised because the sea will be nearer and we will see waves.  I saw lots of waves in the last couple of weeks because I've seen the sea several times.  Last time I went to Southport we walked all the way to the beach to sit and watch the sun setting.  It had been a very sunny day.  But just as it got time for the sun to set there was lots of cloud in the sun setting direction and we could hardly see the sun.  We sat and watched anyway.  Winefride was there too that time because she likes to come out with us.

I took this picture of my person.  In the background is my creator and behind her is a fairground.  My person says that she has never seen this fairground open.  Maybe she just goes at the wrong time.  She might like to go on that big wheel but might not like the fast rides. 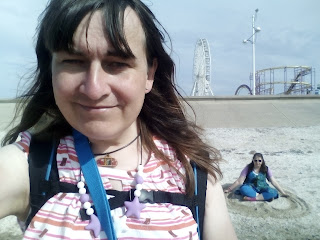 And then it was time to go.  We couldn't stay in Southport forever.  So we walked back to the train station and I got to sit on a plant with very big leaves.  That was fun too.  I don't think anyone else got to sit on the plant that day. 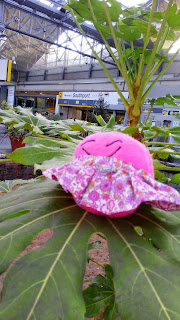 On the train I sat and remembered the day and I drank my tea.  You will notice that we bought our tea from a shop called Subway.  That's not at the station.  You can't buy cups of tea at Southport station.  There's a shop outside that sells drinks.  But it doesn't sell cups of tea.  It sells cups of coffee.  But it doesn't sell tea.  You have to walk a very long way indeed to buy a cup of tea in Southport, especially when it's so late that most of the shops are shut.  But we found tea because we needed tea.  We hadn't drunk tea since going to the cafe by the field.  And now we needed tea.  My person likes tea.  She's especially obsessed by what she calls black tea.  She has it with milk so it's not black.  And it comes in a white packet.  But the packet used to be black so she called it black tea when the packet was black and now she still calls it black tea even though the packet is white and she has it with milk.  She seems to think that's a totally reasonable way of naming tea.  She's also got some green tea here.  But that's not green tea.  It's a spiced tea and the tea is black.  But the packet is green.  She wants to get some red tea too but only knows of one shop that sells it and that's in Manchester which is a long way to go for a teabag.  My person does also have lots of green tea that is proper green tea.  Black tea and green tea are both black teas but her green teas are green.  My person has too much tea.  But she likes tea and I have to say that sharing in tea drinking with her is very nice.  I like tea too.  My person has more than one mug.  That's good because how else would I be able to have tea to drink? 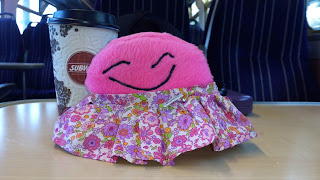 So there I am, with my tea.  I was quite tired but it had been a wonderful day and I was happy.  I am happy now because I'll be seeing snowdogs today.  And I'm happy because I saw the angel yesterday and was reminded of all that the angel said to me.  I'm happy because I've got my sister.  I love Winefride.  I have lots to be happy about.  My person says that there are lots of sad things going on in the world.  My person says that life can be quite difficult for her.  And it can be much more difficult for lots of other people.  But I am still happy.  Because I am me.  Because I am loved and love.  Because I listened to the angel.  Because life is a wonder and because I am awestruck by the amazingness of it all.  And because there is always tea in this house.  And tea is a happy thing.