My person doesn't seem to be very happy this morning.  I think it's got something to do with that nasty Mr. Trump.  She says that Mr. Trump has said lots of stupid things.  She says that Mr. Trump has said lots of mean things too.  About disabled people.  About black people.  About women.  About people of other religions.  About almost anyone who isn't like him.  My person doesn't like Mr. Trump much and I have to say that I haven't seen much to make me like him.  But my person says that a lot of people seem to like Mr. Trump even though he has said so many horrible things about so many people.  My person says that horrid Mr. Trump has just won some kind of popularity contest and now he's going to be given lots of power and will even be given a button that he can press if he wants to blow up the world.  I think that's what my person means.

My person seems upset by it all.  I've told her not to worry and that we can go out and have a nice day anyway and hunt for some more snowdogs.  Yesterday she took Winefride and me out and we saw lots of dogs.  We saw nine that we haven't seen before.  We would have seen ten but one was missing and we were so sad that Winefride and I cried lots about it and it was only when my person told us that we would go on a boat and then go and see some more dogs that we cheered up.  It's sad that there's a missing dog.  Tomorrow we might see where there used to be another dog and that one's missing too.  My person says that there were 61 big dogs altogether but that we will only be able to see 58 of them.  There are lots of little dogs too.  And yesterday I was really very pleased because I was able to introduce Winefride to one of my old friends, the Herma Merma Dragora.  She was a bit scared to begin with because the Herma Merma Dragora looks quite fierce but she soon relaxed.  He's obviously still working very hard at his job because the sea ogre from Cleveleys hasn't paid a visit and destroyed South Shields.

Today I want to tell you about a happier time.  The only thing that could have made it happier for me was if I had been able to share it with Winefride.  But she hadn't been created then.  It was a very long time ago.

It was a day of friendship.  A day of sunshine.  A day to relax and to smile.  I smile all the time.  I can't help it because I'm a pretty happy person except when my person forgets to take me out or when a snowdog is missing.  I also can't help it because my smile is sewn onto my face.  But sometimes I smile more.  And it's obvious from the pictures.

We were in Southport and were having a good time.  It was the day I sat in the shoe of a giant too.  Exciting.  We went into a shop and it was there that I found lots and lots of friends to play with and it was such fun to see them smile and to watch how they could all move all by themselves even though they are toys.  Some of them were so funny and I laughed a lot and my creator laughed and my person smiled. 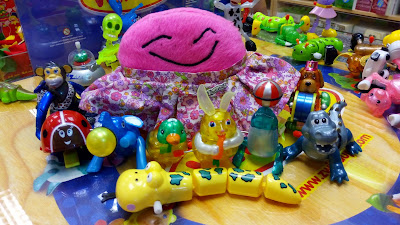 I think my creator wanted to take all of the new friends home with us and I wouldn't have minded that at all.  They were all quite lovely and it was a pleasure to meet them all.  Unfortunately a person said that we would have to pay lots of money for each friend we wanted to take home.  So we could only afford to choose one friend.  Who to save?  Who to save?  Eventually the decision was made and my creator said we would take an elephant with us.  I hope all those other friends are okay and that they looked after each other well.  I will probably never see them again but meeting them was a joy.

We walked on from the shops and we found a place to drink tea.  We all needed some tea.  It was very nice because we sat outside and the weather was lovely and there was a field and I was very happy with the whole experience.  Here I am posing with the tea and my new elephant friend.  In the background you can just make out my creator.  My person took quite a lot of pictures of my creator that day and in some of them you can see pure joy on her face and it's wonderful.  Especially in the pictures taken on the beach.  I'll be telling you about that in my next post. 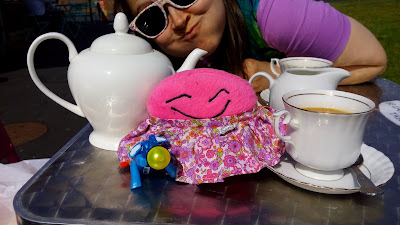 After our drinks of tea we all left the cafe and we went to the field and we sat on the grass.  And then we lay down and looked at the sky and it was very beautiful.  My person says that there is beauty in the world no matter who wins an election.  I hope we find some of that beauty today.  She needs to smile more and laugh more and be silly more.  Silly in a good way. 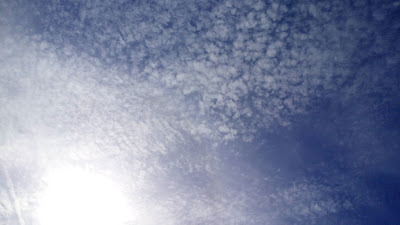 We took lots of sky pictures that day.  My person likes the sky.  Sometimes she sees all the colours of the rainbow even on a cloudy day and sees rays of coloured light coming from the sky and hitting the ground.  I think she might just be imagining it or that she's just being strange but she seems to enjoy it when it happens and sometimes she gets a bit happily lost staring at the dark clouds.  I prefer it when it's sunny.  But clouds can be very pretty too and on that day the sky was beautiful. 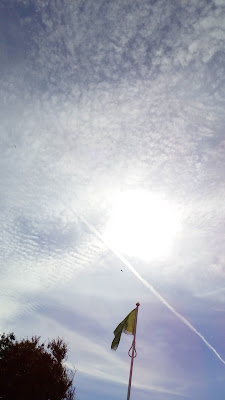 We sat in the field and we blew bubbles with our bubble guns and we lay back and there was peace inside us.  I recommend it.  Sitting or lying back in a field on a sunny day and just being at peace.  Just be there.  In that moment.  Forget about Mr. Trump.  Forget about all the hard things of life.  Let them go.  And just be.  With the grasses.  With the sky.  With the warmth.  With the sound of a child's laughter as they run around with a borrowed bubble gun.  Just be.  My person doesn't just be enough.  She lets thoughts run wild and gets caught up in things even when there's really nothing to get caught up in.  She's learning though.  And I am teaching her.

One last photo of me.  I was very happy indeed.  I'll tell you about the rest of the day next time. 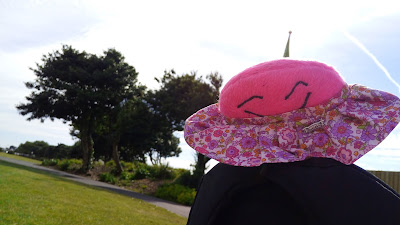 There will be more days like this.  No matter what happens in the world - unless Mr. Trump ever decides to press that button - there will be plants and sunshine and clouds and light and shade and bubbles and friendship.  Someone wrote this morning that the world has just got darker.  Maybe so, but there is still light and warmth and the sea and snowdogs and there are still lots of people who seek to walk in that light.