My person is a silly woman sometimes.  I don't think it's her fault.  She just is silly.

This morning she took Winefride and me to a church fair.  She planned it all carefully.  I think we were going to have a good time and that we would meet some of the people my person used to go to church with when she was a preacher man and when she used to write sermons sometimes.  That was a long time before I was born.  She believed the words she said in her sermons.  I've read a couple of them.  Some of what I've read I agree with.  All the bits about being good to each other.  Some of it I don't agree with.  Back then she still thought that believing in Jesus - and believing lots of things about him - were an essential for her life and for the futures of other people too.  She doesn't believe that now which is good because I think I would end up having lots of arguments with her if she did and then Winefride would get upset.  My person still quite likes Jesus though and still owns more Bibles than most Christians.  Strange.

Today we went to the fair.  My person checked the time of the fair.  She checked the date of the fair.  She read those details.  She checked again.  And again.  She must have checked half a dozen times so that we would know exactly when to leave the house.  She had worked it out to the nearest minute.  Nothing was left to chance at all.  Nothing.  My person can be like that.  Work it out thoroughly so that she knows exactly what belongs where and when it will get there.  When a journey goes wrong it can be majorly stressful for my person.

We went to the fair.

And we arrived at exactly the right time.

But we arrived at exactly the wrong date.

Yes.  My person is silly.  She took us to the fair a whole week early.

She had read the date over and over again.  But it was in her head that the fair was today.  After all, a fair somewhere else was today so surely this one would be too.  Her head did that.  And once done, no amount of reading and re-reading the correct information could change the wrong information engraved within her.

That's the way her brain works.  Fortunately she laughed about it, even though she had missed the other fair to go to the one that wasn't on.

Yes, my person is silly.  Frequently.

Enough about her silliness.  I want to share a little more about my exciting day out when we walked along the River Irwell.

I'll let you in on a secret now.  I have walked the second half of this walk again.  A couple of months ago my person took me back there and we took Winefride too.  We walked along the river again.  A long section was hard.  The first time we walked along one side and it was very muddy under the trees.  The second time my person decided that the route along the other side would be better.  It wasn't.  It was worse.  But we made it.

And then after our exciting walk - since my creator wasn't going to be home for hours - we went to a place called Farnworth.  We all like Farnworth.  The chip shop has good chips.  The cafe is very friendly and doesn't play horrid music.  There's a shop selling very rubbish imported toys, bad enough to disappoint even the least discerning child.  We like looking in that shop.  And most importantly, there are some very good charity shops.  My person has always bought at least something in Farnworth.  That weekend we bought a unicorn just like my friend Adduno and we gave him to my creator.  Last time we went my person bought a skirt which made my creator very jealous indeed.  My person says it's ultra-swish.

And then on that day, after Farnworth we went to visit a shrine.  My person was very silly there too.  We walked into the shrine and people were praying in front of what is either the body, blood, soul and divinity of Jesus or a wafer depending on your beliefs.  They were being silent.  And then my person failed to turn off her phone properly and suddenly, at the highest volume the phone could manage, came some not subtle at all Southern blues-rock by a band called Gov't Mule.  My person is silly.

But that's not the day I want to tell you about.  Maybe one day I should take pictures of Farnworth and show you what a wonderful place it is.  I could go to a big park there too and show you that.

On the day I'm telling you about I had just avoided being eaten by a wolf and then met some very spiritual worms.  It will be obvious to you that I preferred one of these experiences to the other.

We left the worms behind and I met lots more creatures and they let me have my picture taken with them.

First I met a caterpillar and lots of ladybirds.  I liked the ladybirds because they had arranged themselves in the right order.  They should have been in a straight line too but at least they were in the right order.  There were nine of them and they had different numbers of spots and they were using their counting skills well.  My favourite ladybirds were the second, third, fifth and seventh because those are prime.  I also liked the eighth, because he was a cube number and he also proudly told me about being part of the Fibonacci sequence.  The sixth said that he was a much better ladybird because he was perfect and because it's much better to be a triangle than a cube.  But how can you make a judgement like that?  I like triangles.  And I like cubes.  Which is better?  Neither.  They are both needed.  It's like asking whether an autistic person or an allistic person is better.  Neither.  And don't let anyone tell you otherwise. 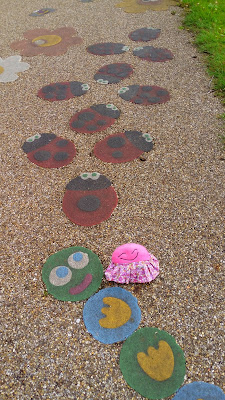 Walking onwards I met a duck.  I'd already ridden across the river on the back of a black swan that day so didn't need to ride on the back of a duck but it let me sit on its head and we walked around for a while quacking together and singing an amazing song about a duck.  Nooooo.  Not the one with the lemonade stand.  The duck didn't like that one and said it got quite annoyed because people kept wanting to sing it.  A tip for you:  Never sing the duck song to a duck because it's likely to bite you on the nose if you do.  A second tip for you:  Never sing the llama song to a llama.  I haven't actually met a real llama but I think llamas must be very fed up with hearing that song.  Try to be original if you meet a llama.  Sing them a song about Jesus.  Sing them a song about a different Jesus who joined the circus and worked part time as a pancake juggler, part time as a daredevil motorbike rider, and part time as the woman taking the admission money.  This different Jesus is a girl Jesus you see.  Or both a boy and a girl.  Jesus is big enough to be both.  If other humans can be both then it would be no trouble at all for Jesus. 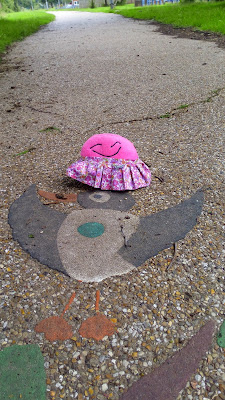 My person is shaking her head at me.  Because she can't quite understand how I got from meeting a duck to talking about a gender-fluid Jesus in a single paragraph.  It wasn't hard.  I got there because I am extremely clever for a small pink soft toy.  I'm far more clever than my person expected I ever would be.  Sometimes I say things that she wouldn't ever think of.  Good going for a toy.  She is amazed sometimes because she thinks it is a simple matter to have this blog.  Just share a picture like this - of me riding on a dog - and that's that done. 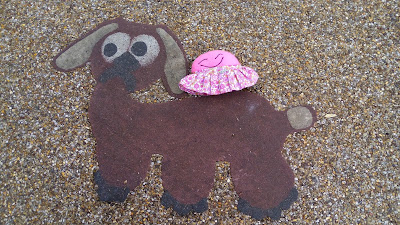 But no.  Because I have my own voice and my own being and I like to use it.  Sometimes when we're out my person lets me choose what we're going to do too.  She would never have ridden on the narrow gauge railway if I hadn't said we should.  Next time we go I want her to spend the extra money so that I can drive the train.  They allow that.  And I want to drive a train.  Not many small pink soft toys get to drive trains, or ride on swans, or have blogs, or tell the world how silly their people are.  I am the luckiest small pink soft toy in the world.  By a long way.  And I've got Winefride too.  I am the luckiest.  And Winefride is the second luckiest.

And then I got to ride on another dog and that was very exciting indeed.  Because the second dog was a racing greyhound.  I had to hold on very tightly because she ran so quickly.  My person couldn't keep up at all.  I think the greyhound was showing off a bit.  Like I was in the last couple of paragraphs.  She wanted to show me how fast she was and she ran all the way back to Manchester Victoria station, where I had started my walk.  That was a bit worrying because I was now miles away from my person and that's a frightening prospect unless I am at home.  Fortunately the greyhound listened to my request to run back along the river and so we got back to my person who was still standing there looking very anxious and panicky indeed because she thought she might have lost me.  She already had her phone out and was going to phone the police to report a missing soft toy.  She gets scared if she thinks she has lost me and checks regularly to see that I'm still there.  I don't know how she would cope if she did ever lose me.  It doesn't bear thinking about. 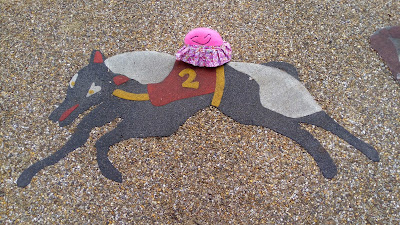 After the excitement - and worry - of the greyhound, sitting with this calming creature was a big relief.  She looks a little bit like by creator's cat. 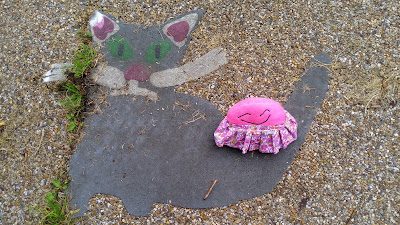 I met one more animal that day.  An owl.  Owls are meant to be particularly wise creatures aren't they?  This one wasn't.  This one was as dotty as a fruitcake.  I couldn't get him to say anything sensible at all.  But he did make me laugh as he danced around the path and sang about hobgoblins and tigers and sea anemones and the light of the moon.  A very mad owl.  But harmless and very cuddly. 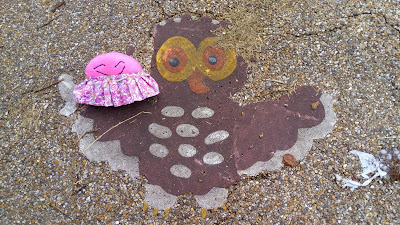 We left the owl and continued our walk along the river.  For a while we saw no more unexpected animals. 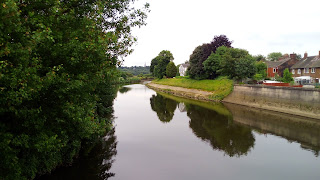 Next time I'll tell you more about my river adventure.  I'm afraid that there's another very frightening thing to talk about.  But don't worry.  I survived.  I am still here to tell you these stories.  It's okay.