I was in a church with my person.  I seem to be in churches with my person far more often than you might expect when neither of us go to church.  We would have been in one on Sunday evening too if we had been able to get there in time, joining in with a commemoration of the Transgender Day of Remembrance, and thinking about all the transgender people who have been murdered across the world in the last year.

My person is transgender but the probability of her being murdered for being transgender is very nearly zero.  Because she lives in the UK.  Because she is white.  The church people were going to read the list of names and locations of the murdered, just as they did last year when my person was still a part of the church.  The vast majority of people on that list are not white.  The vast majority are black and a smaller but large group are Latino.  And the majority of them live in Brazil.  If you're black and transgender in Brazil you are at a shockingly high risk of being murdered, especially if you haven't got lots of money.  But my person is not at risk.  Not in the UK.  And not with her white skin.  She is very lucky indeed to live in this country.  Things aren't perfect here by any means and she knows people who have suffered far more than she has for being transgender.  She's been fortunate and she knows it.

Back to the beginning.  I was in a church with my person.

I was in a church named after Saint George - a man most famous for doing something that he never did.  A bit of a rubbish Saint in many ways.  If I named my church after a Saint I would choose one who actually did good things instead of one they wrote stories about.  There are lots of good Saints to choose from.  I might even choose to name my church after someone who isn't actually officially a Saint at all.  Maybe a peace loving Catholic Christian like Daniel Berrigan.  Or a crazy radical German preacher like one of the Blumhardts or Eberhard Arnold.  Or I might pick Jesus.  He was nice.  Or if I had to choose someone like Saint George - someone whose story is mostly fiction - I might decide to go further and choose a completely fictional character.  Saint Frodo's Church.  Saint Dorothy Gale's.  Saint Skulduggery's.

Those are all good.  But the church I was in was named after Saint George.  Which isn't unexpected.  Saint George.  The patron Saint of England.  Whoever he was, he wasn't English.  Yes, that's right.  All those far-right English nationalists proudly carry the flag of a foreigner and don't see the irony of their situation.  I don't like the far-right.  I can see my person is worried by them and the way they are becoming more popular everywhere.  I've moaned about that mister Trump before but there are much worse people than him trying to gain positions of big power and I can see why that would be scary.

I'd been exploring the very pretty church for a while and then we walked to the back again.  It was there that I met two new friends.  Here's a picture of us posing together, with me in the middle.  The one on your left and my right is called Jake.  The one on your right and my left is called Blue Bear.  Meeting them was fun and we were able to play in the church and make as much noise as we wanted and run around lots because the only other person there was my person and she doesn't mind. 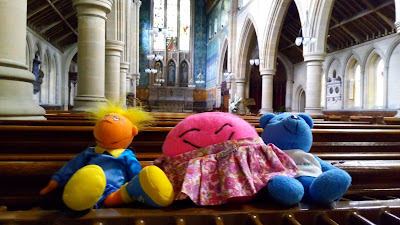 We ran everywhere in the church, in and out of the pews and we laughed ever such a lot.  That picture was taken afterwards which is why Jake looks exhausted.  He ran out of puff and was having so much trouble with his leg that when he sat down it twisted all the way round.  You can see it on the picture.  Backwards.  That must have been very uncomfortable for him but by the time we left the building and I said goodbye to my friends he had recovered.

After all my playing I asked my person whether we could walk round the church again and look at some more of the pretty things there.  Here's me posing at the back of the church.  The statue is great and the window is pretty magnificent.  My person should go back and take some better pictures now that she has discovered that her camera actually has a zoom function.   She didn't know that then so everything looks far away. 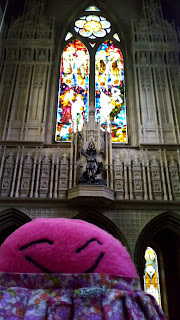 The church in Jesmond is very beautiful.  There are lots of churches in Jesmond.  My person would be quite safe in most of them but there are some where she would be less safe.  One of the churches in Jesmond is very famous indeed for not liking it if you're in anyway queer, whether that be in regards to your sexuality, your gender or both.  They are mean to queer people in that church and they're quite proud of that because they think that Jesus would approve of them for being so mean to queer people and telling gay people to repent and act straight and transgender people that really they're not transgender at all because the Bible says so and that transgender people need to repent as well and reject themselves.  They think saying those things is honouring the God of perfect love.  I think they're totally wrong.  But I'm just a small pink soft toy and unlikely to convince them of anything. 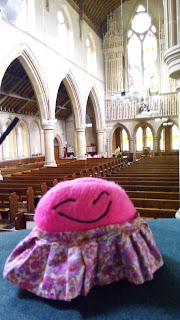 Here I am standing in front of the organ pipes and some beautifully carved wood. 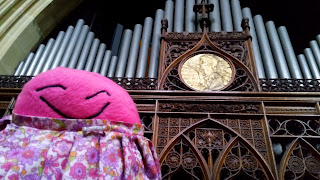 And here I am sitting, I think, near the altar and in front of some beautifully carved marble. 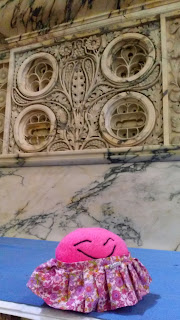 Christianity is very into armies.  At least, some types of Christianity.  These tiles are about one of the armies.  The noble army of martyrs.  There are some very beautiful tiles in St. George's, Jesmond. 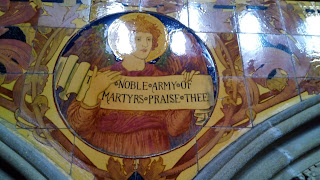 Christianity is also very into flowers and flower arranging.  At least some types of Christianity.  It's almost a dogma of the church in the Church of England and some other British denominations that a church has to contain flower arranging.  Except while a baptist may have new flowers every week, an Anglican has to take some weeks off from flowers because it's a devilish criminal offence to have a flower inside the church for the weeks before Easter.  No flowers.  And you're not allowed to say Hallelujah either in those weeks because apparently praising God in such a manner is against all the important rules in those weeks.  I don't understand that in the slightest.  I really don't.  My person tried to explain it but she never quite understood it either.  No saying Hallelujah in Lent.  Some Christians give up chocolate for Lent.  Some try to give up complaining.  The Anglicans give up saying Praise the Lord in Hebrew for Lent.  And they give up flower arranging.  My person gave up going to church for Lent. 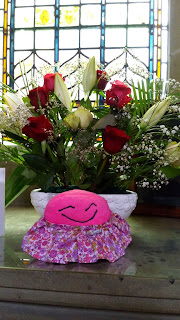 We left the church and both felt very pleased to have visited.  We nearly went back there last week when we passed it again but we were in a hurry to go and see lots of Snowdogs so we didn't quite have the time.  It's a shame.  I would have liked to have met up with Jake and Blue Bear again.  And I would have liked to have got my person to take some better photographs of the building now that she's learned to use a camera slightly more than she had in June.

We looked back at the church.  And then we walked away to wherever it was that we were going. 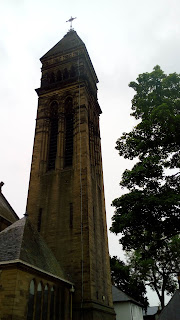