Blob Thing Goes Gardening With A Herbalist In Morpeth

Blob Thing speaks:  [Honest, he does.  People don't seem to believe me that he is the one writing all this and that I am just the one typing it for him.  He's very clever.  For a soft toy.]

I've asked my person what I should talk about next.  She didn't know.  She would probably prefer it if I didn't talk about anything for a while so she can write the things she wants to write.  My person has her 250th blog post to write which is quite a milestone.  She also wants to finish writing the draft of a Christmas story that my creator got her to write.  [No.  You know that isn't quite true Blob.  You know she only gave me a half sentence prompt and I did the rest.  And you know she only gave me the prompt because I asked her to.  So don't blame your creator.]  That doesn't matter.  The point is that you're writing a story and I think you would prefer to be doing that right now not typing my words.  [Well you're right there Blob.  So get on with it.]

Last night we had a look at some photos of my adventures and we made a list of some of the adventures that I haven't talked about yet.  I didn't sleep well last night and they don't make sleeping tablets for soft toys so at three o'clock I found myself thinking about it.  Should I write about the beach at Alnmouth?  Should I write about the Sunday Assembly?  How about the time Winefride and I did a fun dance in a cafe with one of my creator's friends?  There's even a video of that one.  Or maybe I should finish my description of Greenbelt because I want to do that.

No.  None of those things today.  I have decided to write about an adventure day I had five months ago.  Five months ago tomorrow to be exact.  That was the day my person took us to explore some of Morpeth.  The first of July.  The start of the second half of my first year of life.  Ooh. Wow.  That's exciting.  It's just a month until my birthday.  I wonder if I'll get any presents.  My Morpeth adventures seem good to write about because tomorrow I'm going to be going back to Morpeth and I think I'm going to be fed cake too.  This time Winefride will be there too.  I hope she likes it.

This has been a year in which we have walked to Morpeth - another adventure for me to write about and there's a video from that day too.  It's of me, Winefride and my person playing on a slide.  It was a wonderful day and we got to eat strawberries at the end of our walk.  Also this year we have walked from Morpeth.  That was one of my first ever adventures.  Just about.  My person took me out with her and then she forgot that I was there so I remained marooned in her bag until over half way through the walk.  Don't worry though - I've made her go back again so I could see the things I missed out on first time.  And this has been a year in which we have walked in Morpeth.  That was a very good day too and we discovered lots of pretty things.  I wanted to play on the swings in Morpeth but it was raining at that point and my person didn't let me.

We arrived in Morpeth on the bus and walked down the main street to the river.  On the way we passed the Bagpipes Museum.  Yes.  It's true.   Morpeth has a museum devoted to bagpipes.  We went in and had a quick look but I have to say it wasn't the most exciting part of the day for me.  Bagpipes are okay in their place, which isn't necessarily in the main shopping street of Newcastle.  I like some pipe music and we even own some CDs with pipes of different kinds.  My person is telling me that we should listen to her Kathryn Tickell and Davy Spillane albums again.  I hope she spelled those names correctly because I wouldn't have been able to do it.

Then we crossed over the river.  We didn't use the busy road bridge because behind the bagpipes we found a quiet footbridge.  My person took pictures from the bridge.  When she blogs about the day she can include them all.  I don't want to post them because none of them show my happy face.  I am happy to show some pictures that aren't of me.  But not all of them.

Here's one not of me.  Taken from near the bridge.  This shows the River Wansbeck.  It's a weir.  It's been at least two days since I last included a picture of a weir. 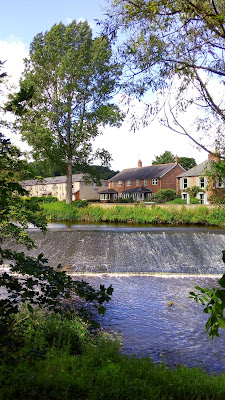 We followed a little lane from the bridge and entered a park.  This was Carlisle Park and I got a bit confused because we weren't in Carlisle.  I want to go and explore Carlisle one day.  It's a very long bus ride away but that's no excuse and my person should take Winefride and me to see it.  Next year.  When it's a bit warmer.  All we would have to do would be to get the bus to Hexagon and stay on the bus.  I want to go back to Hexagon too.  Maybe next time I'm there I can be very brave and go into the prison even though that's a very scary place.  Yes person, you must take us to Carlisle.  It won't cost you anything.  So don't make excuses.  I promise we'll behave on the bus and I'll help you look after Winefride if she gets bored.

We walked up a hill in the park and I started to feel good about being in Morpeth.  Already the park was proving to be a richly rewarding revelation, reaping righteous rewards.  [Er, Blob ... I think perhaps you're taking alliteration a bit too far there.]  Having walked up the hill we looked across to a big castle.  At least it looked like a castle.  But my person says that it isn't a castle at all.  She says it used to be the court house.  Not any more.  Now it's filled with apartments.  Expensive ones.  The kind of apartments where your towels are washed for you and someone makes your breakfast.  I think it should be a castle though.  A castle with a very strict court that makes you clean the roof and look after the park just for dropping one sweet wrapper on the pavement.  I dread to think what the penalties might be for dropping a takeaway wrapper. 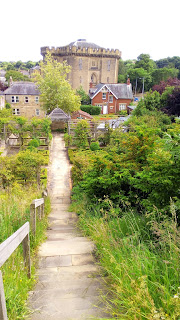 We had just walked up a hill.

And we stood at the top of lots of steps.

But what was at the bottom of the steps did look interesting.  So we climbed down all the steps.  If we had known that we were going to end up at the bottom of the hill we might not have walked to the top of it.  We might.  People do that kind of thing.  Anyone climbing a big hill knows that in the end they will be back at the bottom of the hill.  They do it anyway.  For fun.  For the view.  For the satisfaction of having climbed to the top.  I want to go up some big hills one day but it's difficult to reach them from here on a bus.  My person should work out how to get to some bigger hills next year.  Perhaps she will go to a bigger hill one day when staying in the Manchester home.  There must be bigger hills near there that she can find using a bus.  Or even a train.  I like trains.  I don't think I'll ever climb Everest though.  But wouldn't it be amazing if I did?  Just think of all the photos I could bring back from the Himalayas.  I could be the first small pink soft toy to climb Everest and I would get in the record books.  I could be.  But I won't be.  We haven't even finished exploring Tyne and Wear.  It's a bit soon to think about exploring Nepal.

And we did find something very nice indeed at the bottom of the steps.  We found a pretty garden named after a man called William Turner. 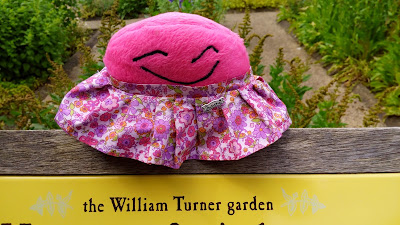 The plants in the garden are mainly ones that William Turner put in his book.  Turner was born about 508 years ago in Morpeth.  He didn't stay in Morpeth as an adult but Morpeth is proud that he was born there.  He wrote "A New Herball" the first clear survey of English plants.

Here are some pictures of me enjoying the garden named after him.  It was very nice.  I preferred being by the river later because I like rivers but this garden was pretty and I liked it. 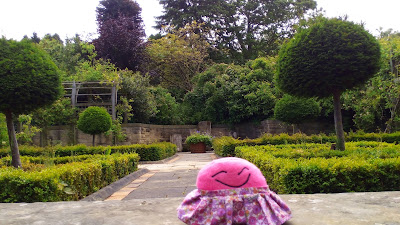 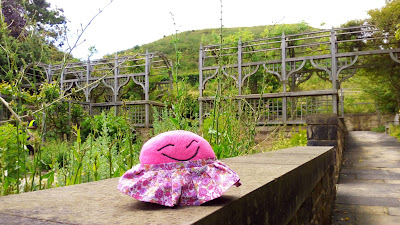 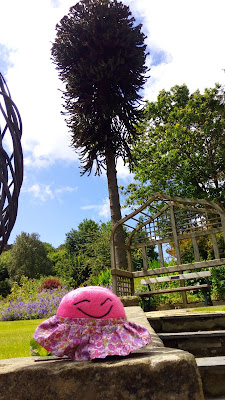 Here are some more facts about William Turner:

He was famous for teaching his dog to steal hats from the heads of bishops.

He published the first printed book about birds.

He was imprisoned for preaching without a licence.  He later got a licence and became a priest.  And then he was thrown out of the priesthood for his views.

He died at a place called Crutched Friars.

After exploring Turner's garden I felt I needed a rest.  Especially as I knew my person was about to make me climb back up the hill.  There was a highly suitably place to sit and I basked in the sunshine, taking advantage of it because I didn't think I'd be seeing much more of it. 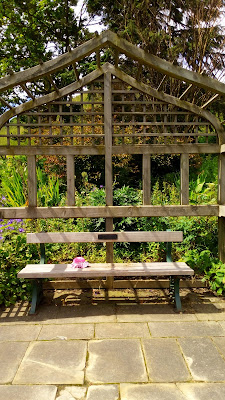 There.  Finished.  Now my person can get on and do some of her own writing.  If her fingers aren't too tired from doing all of my writing.  Okay my person.  We can stop now.