Blob Thing Heads For The Hills After A Very Lucky Escape

Blob Thing says:  [He truly does.  This doesn't get written unless Blob is with me.  He can't shout loudly enough if he's stuck in my bag in another room.]

It was five months ago.  Exactly.  Well not quite exactly.  It will be exactly in about three hours as I am talking.  I was in Morpeth and my person and I were part way through an exploration of Carlisle Park.  It's amazing.  In three hours time I will be back in Morpeth again with my person.  Winefride will come with us today.  She's been to Morpeth before but hasn't seen Carlisle Park and hasn't seen the stepping stones over the river.  All she's really done in Morpeth is eat free strawberries and shortbread biscuits.  She enjoyed that though.  She was only eight days old and she got to eat her first strawberry.  The look on her face!  We did lots of things that day.  Had a long walk.  Went on a big slide.  Explored a graveyard.  Discovered some more stepping stones.  Now I want to talk about that day but my person says to carry on with talking about the five months ago day.  The later day was better because Winefride was there and she has improved things for me every single day since she was created.  Every single day.

Well.  We climbed up another hill.  We had climbed up a hill.  Then we had climbed down a hill.  And now we climbed up a hill again.  At the top of the hill I met a big metal bird.  My person wanted to include a picture showing the whole creature but I told her she wasn't allowed to because it was a rubbish picture and cut off part of the bird's beak.  She wasn't good at using her camera that day.  There are out of focus pictures.  There are wonky pictures.  And there's one where she cut the top off a church.  I think she's got a bit better at using the camera now but she still has the ability to go wrong.  And to be very wonky.  She's quite a wonky person too.  A week ago she had to go to a hospital to see a physiotherapist and I just sat there laughing as he kept listing ways in which her back is very interesting.  He said it's got at least five things wrong with it.  That's even more than I thought.  Luckily all five can be solved or diminished if I keep bullying my person to obey the physiotherapist's instructions. [I don't need bullying thanks.]  Yes you do person.  You'll never do them regularly unless you've got someone to remind you because you just won't.  You'll have some kind of executive functioning failure even more than other people.  You need me!  [Honest Blob, I'd do my exercises.  I would.  I would.  I WOULD!]  Please don't get in a temper person.  You've got a blog to type for me.  Get on with it please.

A bird.  It looked like quite a friendly creature and it sang a pretty song to me.  This wasn't just a magpie making a racket like the ones in the garden.  This wasn't even a nightingale.  I've heard that nightingales have a pretty song but I haven't heard one.  My person said she went to Berkeley Square once and even if a whole choir of nightingales had been singing she wouldn't have been able to tell because there was so much traffic whizzing round and round all four sides.  This bird was amazing.  Like the best of counter-tenors and it was singing something very pretty that my person says sounds a bit like Vivaldi.  She might be right.  I don't know.  I've only ever heard one thing by Vivaldi.  The Four Seasons.  Which hasn't got any singing.  And I've only ever heard altered versions of it.  My person got a bit obsessed in the summer by a version played by someone called Jacques Loussier who played the whole thing as part of a jazz trio.  I liked it but didn't need to listen to it quite so many times as my person's obsession dictated.  Over and over again.  She should change the CD more often. 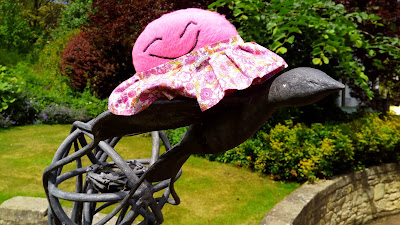 Why do I trust animals?  It's not as if I've never had difficulties with them.  You would think I might be a little more wary.  I've only just told you of two episodes when I nearly got eaten.  Some happier episodes too but being eaten isn't nice.  Unless you're a shaman.  I was with my person once when a shaman told her how good it had felt the previous week to be vomited up by a snake after being eaten by it.  I wouldn't like to be eaten or vomited by a snake.  It sounds very unpleasant indeed but the shaman seemed to have enjoyed the whole experience.  She said it had been a great privilege.  There are some privileges I can do without.

So there I was sitting on the head of a bird.  When suddenly it tossed it's head backwards and I was flung into the air before my person could do anything about it because she was still standing back taking pictures of me looking happy.  As I fell I noticed that the bird had stretched its neck backwards and its beak was wide open below me.

I landed uncomfortably in the bird's mouth.

And with one mighty gulp it swallowed me completely. 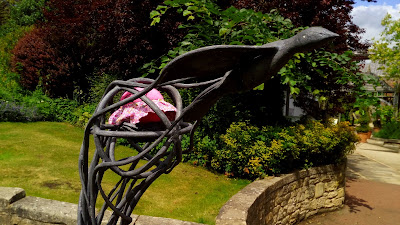 My person was very slow to react and was still taking pictures.  This is the last one she took and you can see that I have been swallowed.

I was scared.  Very scared.  What if I was digested completely?  How would my person ever cope without me?  What if she got sent to a physiotherapist and was given exercises to do?  Was there an exciting afterlife for small pink soft toys?

My person finally reacted and jumped to my rescue.  It was very fortunate indeed that this very strange bird had a very strange long neck leading down to a probably quite bizarre stomach below.  I'm glad I didn't ever find out about its stomach.  The strangeness of the bird was my salvation.

It's neck was not covered in skin or feathers.  It had lots of holes in.

I was too scared to move but my person ran up.  She stunned the bird so it couldn't fly off, by hitting it on the head.  And then she rescued me by reaching her hand into the neck of the bird and carefully extricating me through one of the holes.

I was free.  It took me a while to recover.  The bird wandered off looking miserable.  Serves it right.  Afterwards we learned that it was a Siren Bird, luring the unsuspecting to its shore with its singing and then destroying them on the jagged rocks of its stomach.  I hope it doesn't eat too many soft toys.

After that my day improved.  I soon found my smile again and I had my picture taken in front of lots of trees that had lots of different colours.  Very pretty, like the whole of the park.  Just beware of the birds if you ever visit. 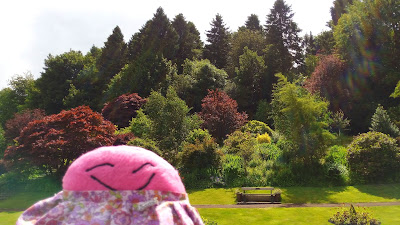 We walked down the hill onto the grass and had a little rest and then wondered what to do next.

Up these steps.  The hill was called Ha'Hill.  At the top was the spot where the first castle in Morpeth stood.  Nine hundred years ago.  It wasn't there any more but we still went to see up.  Up these high and difficult steps. 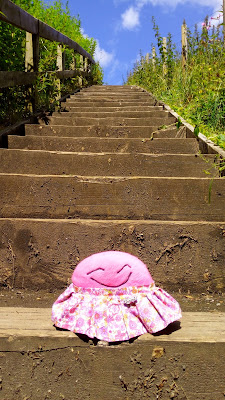 It was worth it though.  I have to admit that.  Just look at this view down to the old court house and part of the town.  We could see all sorts of things.  No wonder they built a castle up there. 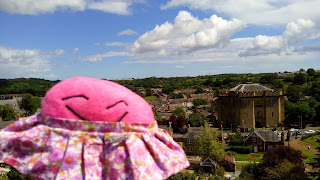 And then we looked out the other way.  It was wonderful up there.  But what was that building in the distance?  It looked a bit like a castle.  I wanted to go and investigate it. 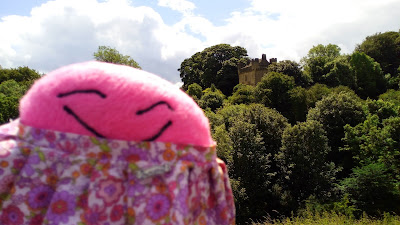 And investigate we did.  But that involved some more walking. 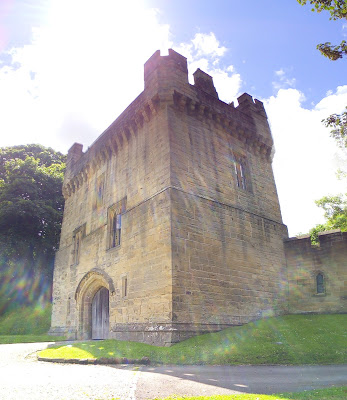 It's not actually a castle.  It nearly is.  It's just part of one.  This is the gatehouse of a castle.  It was built in 1342 by William de Greystock.  150 years before someone sailed across the ocean, got it all wrong, and accidentally discovered there was a continent there.  When he discovered it he began a tradition that continues to this day of treating the native population very, very badly.  You can read about it for yourself.  It's a very horrible story.  Even today, this very day, people of the tribes who were in America before that man arrive are being treated badly.  Today.  This exact day.  You can read about that for yourself too.

Anyway.  It was a gatehouse and I wasn't able to go inside and explore it because now it's someone's house.  They might not have appreciated me ringing their doorbell and asking to come inside to explore and take pictures.  Who knows?  They might have let me come in.  I will never know because I didn't try.  Would you let me explore your house if I rang on your doorbell unexpectedly?  I'm not sure my person would let a random person with their soft toy come in and explore her house.

After seeing the gatehouse there was only one thing left to do.

Climb back down the hill.

We walked a long way through the park after that with only some little bits of up and down.

It began to rain quite a lot which meant we had to hurry up and we couldn't go to the play area.  My creator said that we should have played on the swings even though it was raining.

Eventually we had reached the river.  Back to the river where we had begun.  And not much further upstream.  We could have just walked along the river for a few minutes to reach this point.  But I am glad that we didn't.  Very glad.