Blob Thing Witnesses The Strange, Forgotten Past Of The River Wansbeck

I'm not going to talk much at all today.  I've just got some pretty photos to show you.  They were all taken on our epic walk from Stakeford to Morpeth.  I've already talked about our journey as far as the Bothal Mill bridge on the river Morpeth.  My person has been shocked at how much I've had to say about the experience, especially about Bothal itself.

We had been forced to spend a lot of time away from the river on our river walk.  My person says that it was about an hour.  I say that it was about seven months and that my person has forgotten many key details of what happened to us.  Now we had reached the river again and we wouldn't be diverting from its course again before reaching Morpeth.  Nor would we be diverting the river from its course.  We didn't even have a shovel, let alone any heavy engineering tools and I doubt my person would have been able to divert an entire river with only the use of her bare hands.  Even if she was as strong as Klaus, the giant I met once, or as powerful as the Angel of the North I doubt she would have had the skills to manage to divert a river.  In any case, where would she divert the river too?  It was very happily flowing down a valley, purpose built/eroded for the practical use of a river.  Diverting the river onto the hills would seem to be a fool's errand.  So leave the river where it is.  It's not doing anyone any harm except when it floods.  Are we agreed?

It was lunch time.  I decided that we should stop here.  It's a pleasing spot with the ruins of industrial works on the river that once would have driven mill equipment and turbines.  The area has a big industrial past and much that once was made has been unmade and only a few stones remain.  Some massive structures aren't visible at all now.  The colliery near my house is gone and you wouldn't know that there were tunnels under the ground.  And as for Bedlington iron works?  You would have to work hard to see any sign of that and yet it was a very important place once where wrought iron was discovered and where the rails for the Stockton to Darlington railway were made, as was the first train that ever left King's Cross in London.  It was important but is now invisible.

So we sat and ate our lunch and that was much appreciated by the three of us. 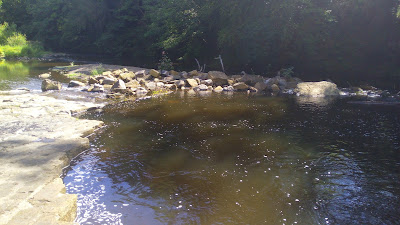 And so began our walk along the river.  We couldn't see much of the river very well because the valley got quite steep and the path had to be quite a long way above it.  There were lots of trees and other plants in the way.  That's okay.  They were very pretty too.  I want to tell you about an unfortunate incident.  I saw a branch that hung across our route and I decided that rather than just going under it I would climb the tree and walk along the branch to see if the view was any better. 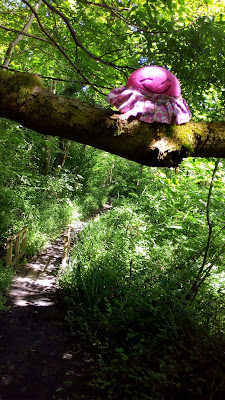 It was difficult to climb up there but I made it.  It must be admitted at this point that my view wasn't much better from the branch than it had been on the path but it was fun being up there and I pretended that I could see all the way to Morpeth, all the way to Stakeford and all the way to Newcastle too.  I don't think my person fell for it though because she told me I was being silly.

Then Winefride saw me up there and she decided to follow.  She didn't have reins then so there wasn't anything my person could do to stop her and she skilfully climbed the tree and walked out onto the branch.  She looked a bit wobbly but seemed happy enough and she settled down onto the branch and laughed. 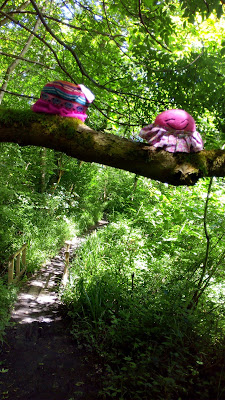 Here we are.  Don't we look utterly fabulous, eight feet above the ground? 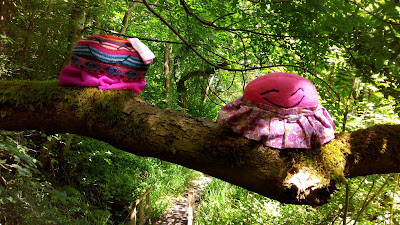 But then the unfortunate incident happened.  Winefride started to walk back along the branch to get down again because I said we needed to hurry up and get to Morpeth.  I shouldn't have said that about hurrying.  Because Winefride took me at my word.  She hurried.  And she hurried too much.  Poor Winefride.  She lost her balance and fell to the ground far below.  I was very worried because it was a long way to fall and she was lying there silent and not moving.  I didn't want her to be hurt.  It was quite the unfortunate incident wasn't it?

But then she wriggled and opened her eyes and giggled.  She was fine.  I was very relieved indeed.

As we continued our walk we discovered some more interesting things from the forgotten past.  My person will tell you about them properly if ever she manages to blog about our day out.  I think she already explained about some of them when she walked along the same path before on that difficult day when she took me on one of my first adventures and then forgot about me until the adventure was over half way through.  I missed out on all the sights I'm going to show you now.  Silly person!

Here I am on a coat of arms that was carved into a rock face. 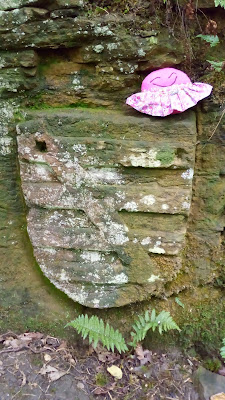 And here are Winefride and me sitting on the remains of a wall.  I think this was part of an old chapel.  It seems an odd place to build a chapel but maybe it was busier here once.  Or maybe someone wanted to have very quiet church services.  I went to a church yesterday.  Sort of.  I think my person half-liked it even though it was sort of church.  It took place in an art cafe in Manchester.  A very nice place.  There's a man outside the window shouting and making a big noise right now.  Well not right outside the window.  I can't even see him so he must be a long way away and shouting very loudly indeed.  Not the window of the art cafe.  That's not where I am right now.  Right now I'm sitting with my person and we're in my creator's house.  Later we're going to go out on a bus to a little place we like and we'll go to charity shops and drink some tea.  I'm looking forward to that. 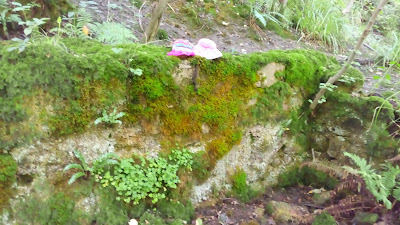 Here's a close up of us looking particularly stylish on the wall.  I wonder who worshiped here and whether they did it in English, Latin or perhaps in Urdu or Sanskrit although that seems unlikely because not many people in Northumberland worshiped in Urdu or Sanskrit in 1800.  Sanskrit is an amazing language that I don't know how to speak.  Urdu is probably a good language too but my person has some holy books that were written in Sanskrit and every word seems to be more philosophical and full of meaning than the last.  I haven't ever worshiped in Sanskrit or Urdu.  Or even in Cornish and that's a much more local language to Northumberland than Sanskrit.  I don't think many people worshiped in Cornish in Morpeth though.

It's possible to worship in Cornish now though.  I'm going to show you some now because it's nearly Christmas.  Here's the start of the song that Mary, Jesus' mother, sang after being told she would bear a child.  It's taken from the Morning Prayer liturgy that you can find here if you happen to be inspired to worship in Cornish or see what the language sounds like.

My person says it's a little bit like Welsh because the languages were related.  I got her to take a picture of a piece of Welsh graffiti yesterday in the toilet at the art cafe.  She didn't mind because it made her laugh.  It was a question she used to see a lot when living in Wales whenever something was displayed in English only.  BLE MAE'R CYMRAEG?   Oh yes, here we are sitting on the wall. 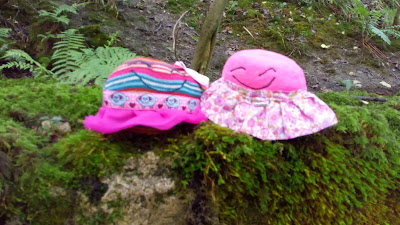 And here we are on top of another wall.  This wall used to have a well at the bottom.  I wonder if it was a holy well with a spring formed by a saints head rolled onto it like the one at Holywell in Wales. 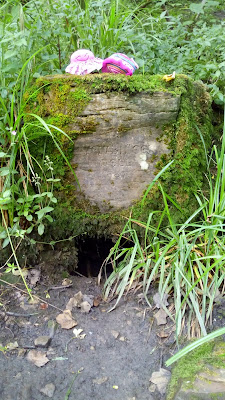 I will share two more photos with you.  They both show me in front of a viaduct.  This was designed by Stephenson and still carries the railway over the river Wansbeck.  I was sad because my person said that when she had walked that way before the plants were less green so she could get a better picture.  She also said that the water level had been lower then so she had been able to climb down the river bank and stand on a rock almost in the middle of the river and had been able to get a very good picture of the viaduct.  We couldn't do that.  These are the best we could do.  That's okay.  Maybe we'll go back again one day. 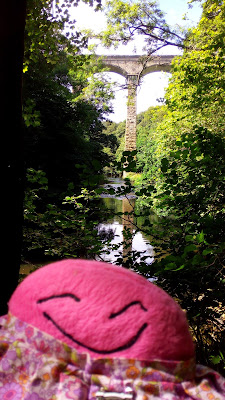 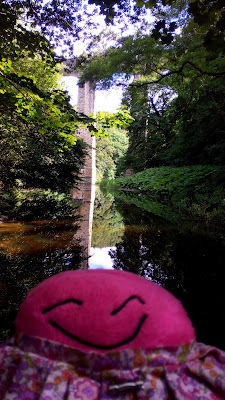 Next time I'll finish telling you about our epic quest.  How we finally reached Morpeth.  And the surprising thing that we found there.