It was proving to be a most amazing day.  I'm not going to say anything more about the events we had already experienced and how I nearly died in the graveyard.  I won't speak more about the rhyming man or the green witches who sheltered us in their castle for five days until it was safe for us to move on.  If you want to learn of those events read the previous two posts.  You won't believe some of what you read there.  My person doesn't believe it either.  She thinks we had a very nice time in the graveyard at Bothal.  She thinks it was a perfectly ordinary day of adventure.  Because the green witches played with her memory.  So that's that.

We walked down the hill from the green witches' castle until we reached safety.  The water.  The evil that had nearly destroyed us could not touch us once we touched the pure flowing water of the river Wansbeck.  Then we would be able to continue our epic quest to find the fabled city of Morpeth.  [Enough Blob, stick to the actual events please.  Just this once.  Please Blob.]

Yes.  Down to the river.  As we reached the very treacherous path to the water my person got very distracted.  And why wouldn't she?  She suddenly stopped.  Pointed.  And shouted, "What the frell is that?" 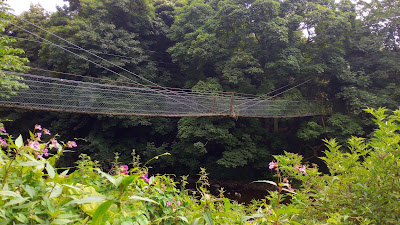 I would have thought it perfectly obvious what the frell it was.  It was a bridge.

We had found the fabled rickety troll bridge over the Morpeth.  [Now now Blob.  You know perfectly well it wasn't a troll bridge.  And you know that it's not fabled.  Do you even know what fabled means?]  Okay.  But it did look rickety.  At least more rickety than the stone and metal bridges we had crossed already on our adventure.  I'm not going to admit that there aren't any trolls dwelling near the bridge though, only that we didn't see any trolls that day.

I like bridges.  I like to be photographed with them.  I have a desire to be photographed with every bridge across lots of rivers and my person needs to get a move on in finding them all for me.  This bridge is one that few people see.  I thought it very exciting to see it.  This is a suspension bridge and there aren't many of them on the Wansbeck.  It can only be used by pedestrians.  You would never fit a train on it.

Here's the picture of me with the bridge.  Don't we both look stunning? 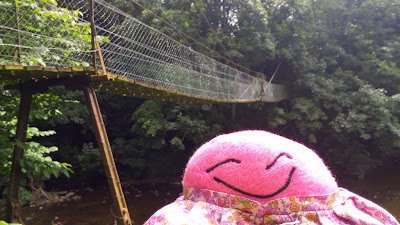 Unfortunately we couldn't use the bridge to cross the river.  We weren't allowed.  I believe that there is a track that runs from the church to this bridge.  On the other side is the rectory where the local minister lived.  He would have had a massive walk every day to get to his church so the parish built him his very own suspension bridge.  Wasn't he a lucky man?  Nobody is ever likely to build a suspension bridge just for me.  I bet nobody has ever built you a suspension bridge either.  There isn't one for my person either.  On the other hand she doesn't need a suspension bridge to get to the toilet in the middle of the night.  We've just been to a kind of church service in which people talked about getting to the toilet in the night.  It took place in an art cafe and wasn't like any normal kind of church service.  But that's today.  It's not the adventure day.

Never mind.  We soon found another way to cross the river.  We descended the treacherous path and encountered this stunning sight: 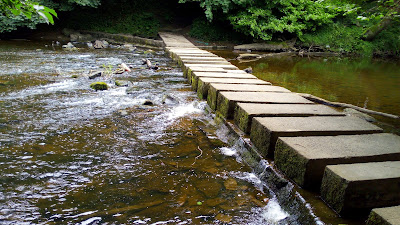 Stepping stones!  I love stepping stones and these ones were amazing.  They're also very obscure.  We saw a sign in Morpeth recently that told of the stones on the Wansbeck and whoever wrote the sign hadn't ever heard of the Bothal stones.

I won't tell you how many times my person, me, and my sister Winefride crossed the stones but it was more than one and less than a thousand.  We had so much fun and I watched happily as my person went completely happy flappy and Winefride jumped back and forth across the stones.  I'm glad she didn't fall in.

Here are some stepping stone pictures.  This first one is of me, standing on one of the stones.  The rickety troll bridge is in the background.  Beautiful. 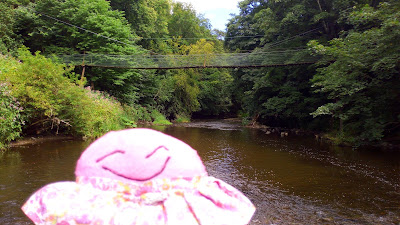 This is the view from the stones if you look upstream.  Beautiful.  Even without me or Winefride in the photo.  I wanted to be able to walk along the light and into another world but obviously that would have been impossible so I stayed on the stones. 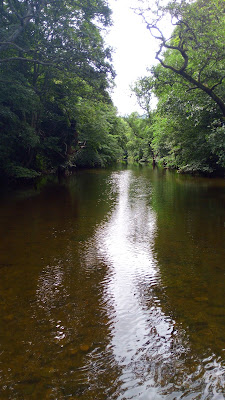 Here I am with my sister.  She is so brilliant.  Hmm.  Neither of us are managing to look at the camera for this photo.  We're autistic and sometimes find it hard and sometimes my person has to take lots of pictures before she gets one where there is eye contact between us and the lens.  You can tell this was a long time ago because my sister hadn't got any safety reins.  I love her.  She makes my adventures much more fun and when we're home we play together quite a lot.  When we're not playing with other friends of course.  Or when she's not lining up her toys and I'm studying. 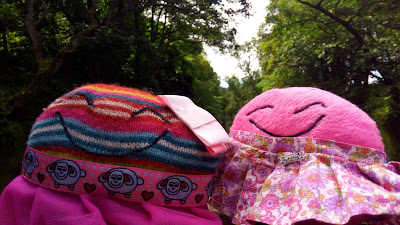 Here we are on the stepping stones.  Awesomely gorgeous. 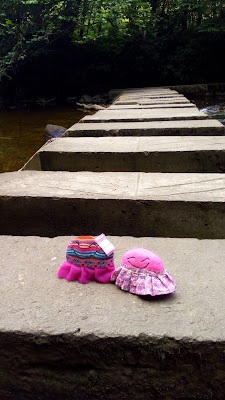 Then it was time to leave the stones and we had to leave the river behind too because the path didn't follow the water.  We had to adventure again and even had to head back through Bothal to get on the right path.  That's a whole other story that I'm not going to tell you about because my person isn't letting me.  It wasn't quite as scary as the story I told of our first trip through Bothal but it was staggeringly stunningly stupendously stultifyingly [is that the right word Blob?] strange.  I won't tell of the vampyre, or of the society of rainbow unicorns, or of the way crazy Jack Williams caused the transformation of our friend Graig-Pethe into a marble plinth.  I won't tell of the battle between the local minister and the evil Lord Farage who called for the execution of all people of a different colour.  Including my sister.  I won't tell of how the green witches destroyed the Scimitar of Broken Dreams.  I won't tell of any of the adventures we had on our second trip through Bothal or how my person's memory had to be wiped for a second time after we were transported back in time again.  My person won't let me.  And the rhyming man himself vowed me to secrecy about some of the things that happened.  Believe me, it's better that you don't know the full truth.  [Blob, that's enough.  Seriously.  I think you make some things up.  I think you do it just because you enjoy it.]  See, my person doesn't know the full truth.

We passed through Bothal without incident [that's better Blob] and reached the river again.  It was crossed by a much sturdier bridge.  In fact this was the bridge we were aiming for, the one on our walk.  The stepping stones had been an unexpected bonus.

Here I am with this bridge.  This is the Bothal Mill bridge, built in 1982.  It's wide enough just about for a car and a walker. 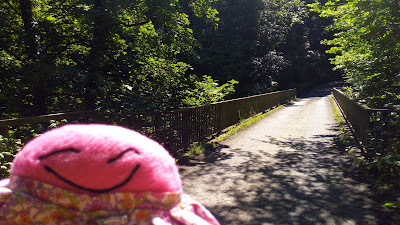 We had done it.  It had taken us seven months and six days.  But we had finally reached the mill bridge.  Seven months of adventures.  There were more than enough to fill a book that would undoubtedly be the bestseller of the year.  As someone said about my last post, "Eat your heart out, J. K. Rowling."  I don't want her to do something quite so drastic.  It's a shame I have to keep silent about our Bothal adventures.  Don't you want to know about what Lord Hampton was doing with Brenda Smith's sisters and a pack of perfectly ordinary living tarot cards?  It's quite easy to do divination with living tarot cards because they tell you the interpretation themselves.  You deal the fool or the devil or the hanged man and they rise up out of the cards and speak.  Have you ever talked with a hanged man?  I have.

We had reached the river and the bridge.  It would now be a simple matter to walk along the river to Morpeth.  And it would be lunchtime soon.  I do like lunchtime.

One final picture.  Here I am on the bridge with the river behind me.  It's beautiful.  I'd recommend that anyone walks the route we did.  And don't worry about passing through Bothal.  It's quite safe now because we cleansed it thoroughly.  Have no fear about it.  Bothal has returned to the light. 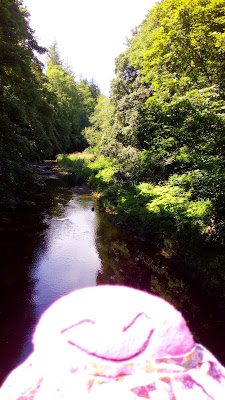