It had been going so well.  And then it all went a bit wrong.  I had been warned.  Over and over again they warned me and I tried in turn to warn my person.  She wouldn't listen though.  Why doesn't she ever listen to me?  It's not as if I didn't know what I was talking about.  The warnings were clear:  Stay away if you want to live.  I know they hadn't gone out of their way to advertise this.  It wasn't as if there were a thousand road signs pointing to the danger zone and armed soldiers and armed priests standing at massive barricades at every possible point of ingress.  There was none of that.  If only the Catholic Church was better organised.  My person might have listened to that.

She might not.  While it's true that she still owns quite a lot of books that have emanated from the lofty spiritual masters who have dwelt in that institution she doesn't often listen to them or it now.  She used to live by their words and teachings and warnings.  If she still lived by them then our river walk might not have been so difficult.  But she doesn't.  I know that particular day went wild as we fought back the powers of darkness but if she still listened to the Catholic Church then I would not exist and neither would my sister and the world itself would be that much the poorer for our absence.  Our person would not exist either.  At least not in the form in which she now exists.  Oh dear, I'm getting sidetracked again aren't I?  And I haven't even begun the tale.

We had traversed the wilds of the open country in our attempts to reacquire the route of the river Wansbeck.  It had been tough terrain with steep hills, ravenous dangerous insects, [Blob, they were just little flies.] a treacherous swamp containing soft toy eating monsters, [it got a bit squelchy under foot Blob] and most dangerous of all was a massive hunting ground twelve miles across where evil warlords compete in the hunting of soft toys and their people. [Blob, it was a little clay pigeon shooting range.]

We had successfully traversed all that and regained the Queen's open highway and began our descent from the mountain peaks.  Surely we would reach the river soon and could continue our fantastic quest to storm the gates of Morpeth and retrieve the holy cup of tea.  My person was feeling much better about it by this point.  The river would be just around the next corner.  It had to be.

Except it wasn't.  Where was it?  What brand of villainy had completely rerouted a river?  Was that even possible?  I was later to find out that the river had not moved at all.  My person said to us that she was obviously confused and that we would find the river soon if we just carried on walking.  She had no inkling that anything was about to happen and in all honesty I didn't know either.

But then I saw it.   A sign post on the road.  It was enough to make me shriek in terror.  It said

In big letters so we couldn't miss it.  Bothal.  No.  No.  No.  Not Bothal.  Please not that.  Anything but that.  I shouted to my person to stop.   "STOP!" I shouted.  We've got to turn back and find another way.  We've got to.  Not many of those who ever entered Bothal have returned and those who did returned insane.  Or dead.  I knew.  I'd been warned about the covens of Bothal and what they do to outsiders.  Oh God I'd been warned.  I wouldn't have even wanted to enter Bothal were I accompanied by one hundred Catholic cardinals all carrying giant crosses and gallons of holy water.

Stay away my person.  Stay away.  For your sake and for my sake and most especially for the sake of Winefride.  How do you expect her to survive Bothal when she can't even speak and doesn't understand danger?  I tried and tried to explain it all to my person and told her about the warnings and about how I had been researching the place.  I told her of Lord Henry Forsythe who had gathered together a band of adventurers and attempted to pass through the village - which at that point wasn't even in Northumberland.  Only one of the band returned, carrying with her the head of Lord Forsythe which had been ripped from his body.  The returning woman was passed the point of help and kept screaming about the sacrifice.

I ask you.  Does Bothal sound anything like the kind of place you would ever want to visit?

[At this point I feel I must step in with an observation.  I don't remember any of this in the way Blob seems to.  While I admit it's possible that my memory was wiped by one of the witches Blob will tell you about so I could enter back into the world with my sanity intact, I feel it's more likely that Blob Thing is just letting his imagination get away from him.  [At this point we, the absent friends of Blob's Person, must step in with an observation.  We feel it's possible that Blob's person has never lived in the world with her sanity intact.]  Hey, that's not fair.  I just want it put on record that I have good memories of our trip to Bothal and I can't remember anything bad happening while we were there.]  You would say that with your memory wiped.  [Shush Blob.  I thought the little village to be very pretty and I'd love to visit again.  Blob has some great photos to share with you of the churchyard and of the river crossing we found there.  If you're passing near to Bothal then take a little detour and see for yourself how pretty and peaceful it is.  It looks like a perfectly wonderful place to live except it has no public transport.]

Wow.  They did a good job on my person didn't they.  She's totally brainwashed [I'm not] and can't even begin to see it or admit it.  [There's nothing to admit]  Obviously some part of the brainwash contained a command to try to convince others to visit Bothal.  I urge you.  I URGE YOU.  Don't listen to her.  Stay away if you value hope.  [Blob, I tell you Bothal was beautiful.  I felt at rest there and smiled many times at the things I saw and even got particularly happy flappy about at least two things and when I blog about Bothal I can tell the truth for the world to hear.]

I can see there's no point arguing.  I only hope I get to tell my tale and then you can judge for yourself.  [Okay Blob, I'll let you.  It's harmless.  They'll see that I'm right and you're wrong and the pictures will call them into the arms of Bothal.  Aren't they lucky?]

The story.  Yes.  We saw the sign that announced the border between safety and Bothal.  My person said, "Come on, the river's this way, it's obvious."  And she strolled on forwards past the point of no return.  I couldn't believe it.  She can be quite stubborn sometimes.  Didn't she fear the witches covens?  But I couldn't let her face them alone, not in her state of total ignorance.  Maybe my deep research into the subject would provide something that could protect her.

So I followed my person into Bothal.

There was only one hope for us as I saw it.  Perhaps the church would still have enough remaining in it that was holy.  Perhaps the memories of a purer past before the demons and their servants took over would protect us in some way.  Perhaps.  I didn't know then that we would find another source of hope that led to our eventual salvation but I'm going to have to talk about that tomorrow.

[Believe it or not, Blob was meant to be covering his entire adventure in the village yesterday, leading up to the point at which we briefly rejoined the river - in the second happy flappy moment.  He talked too much about toilets then and I don't quite know what has happened today.  I might think that he's been eating the wrong kind of mushrooms except that (a) we haven't got any kind of mushrooms at all, (b) Blob Thing doesn't like the taste of mushrooms, (c) he wouldn't intentionally want to eat the wrong kind, (d) I don't think he knows what I mean by the wrong kind, (e) he's far to young for me to allow him to experiment with such things even if he wanted to.  I'm not sure what they would do to a small soft toy but I don't want to find out.  Ever.  No wrong kind of mushrooms for Blob Thing.  Not if I can help it.]

What's she on about now?  Be quiet person.  I'm telling the story.  I grabbed my person and I grabbed Winefride and I started to run, dragging them behind me.  My person couldn't see what the rush was but was happy enough to follow when I told her that there would be a church in the middle of the village and it might be a very old one.  Winefride didn't understand at all but she thought that running down the road was great fun and she started shouting "Wheeeeeeeeeeeeeee!" over and over again.  I knew I couldn't stop her but I also knew that she was putting us in greater danger.  We had to get to the church.

We made it.  Just.   We saw a few people and they saw us but they didn't make any move towards us.  I knew that if we got into the church we would have time to plan for the inevitable onslaught.  I was happy to see that the church was still in one piece.  Obviously it was still a nexus of power and the darkness had not overcome it, just as Jesus so cryptically taught.  Maybe we would be safe for a while.

But oh no!  Tragedy.   We found the church door locked.  We couldn't get in.  I could have cried because I didn't know how we were going to get out of this one.  There was only one way forward.  Into the churchyard.  Surrounded by the graves of the dead.  For good or for ill. 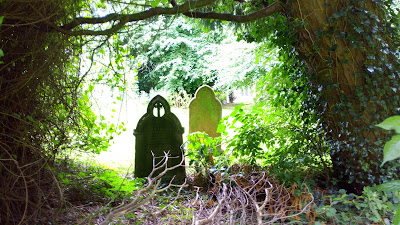 The place seemed to be calling to us.  My person walked on, blind to the peril.

And I, her faithful companion and protector had no choice but to follow her.

[Blob is stopping there.  It's something of a dramatic pause.  He says it is.  Here's what I remember of the story he's told.  We walked into a pretty village, walked to the church and found it locked.  So we decided to explore the churchyard.  It was sunny and peaceful and we were happy.  That's it.  And when the light is as it was in the above photograph - which doesn't do justice to reality - my insides rush forth into a deep joy and on that occasion I got a bit flappy.  I was having a marvellous day.  Just thought I should say all that and set the record straight in case anyone from Bothal ever reads this and gets cross.]  Because they might cast a spell on you and make you sad for the rest of your life or make every word you write have to be "blackguard".  [No Blob, I don't think that's very likely.  Stop now.  You can tell me more of Bothal tomorrow.]