Hello again.  Thanks for bearing with me in the days on which I haven't written.  My person has been wanting to help me but somehow there has never been enough time.  Or more accurately she hasn't made enough time for me.  I'm sure there was enough time to go round for the both of us.  Today there really isn't that much time because we're going on a little adventure soon.  My person joined a choir recently and they have their first little public performance later.  I'm going along with her and we'll take Winefride too and while we're there we can take pictures and generally have a very good time.  Afterwards we might try walking home even though that's a very long way.

Last time I talked with you I finished telling you about some adventures I had in Morpeth.  Today I want to start telling you about some adventures I had on the way to Morpeth.  Not on that day, no.  I didn't have any extra special adventures on the way to Morpeth that day.  I know that riding on a bus can be an adventure but I ride on lots of buses and I couldn't possibly tell you about every journey.  I mean, I'll be riding on at least one bus today but I'm not going to give details of every road it passes between the city centre and the choir.  That would be very boring.  Especially if I was to tell you about the journey every time I take it.

I want to tell you about a different day and a different journey to Morpeth.  In terms of miles I'm only going to focus on the last part of the journey.  The part after we got off the bus.  Because you don't need to know about how we rode on the Metro and then caught a bus.  Not a bus that went to Morpeth though.  Not this time.  This bus went to Ashington.  But we weren't going there.  Not that day.  I went there recently and we walked to the Woodhorn mining museum and to a lovely park with a big lake and Winefride and I got taken on a little narrow gauge railway which was very exciting.

That isn't the day I'm telling you about though.  This time we got off the bus at a little place called Stakeford.  I'd got off the bus there before, the very first time I got taken out on an adventure.  This time things would be very different on four counts:

1. My person was more confident about going on adventures.

2. My person was better at adventuring with me which meant that I wouldn't get forgotten about in her bag for almost the entire day.

3. We would be adventuring in entirely the opposite direction.

4. And this is a big, big difference and the most important one.  We would be taking Winefride.  When I first got off a bus at Stakeford, Winefride wasn't yet created.  I hadn't dreamed of having a sister.  This time she was coming too.  It was going to be amazing.

We got off the bus and my person had a definite plan for the day and only got slightly lost once.  Only slightly.  That's very good for my person.  Sometimes she can get very lost more than once.  On one walk we ended up in a village about five miles from the one she had been wanting to get to.  I'm not sure how she did that and think it was pretty amazing because she didn't completely meltdown over it.  I dread to think what might have happened if we hadn't found a bus stop though.

Winefride, my person and I walked down the hill from the bus stop until we came to the river.  It was very beautiful.  There's a modern road bridge over the Wansbeck at that point that's not pretty but you can stand on it and look both ways.

Here I am on the bridge.  Behind me is the river Wansbeck and it's flowing in that direction to the sea. 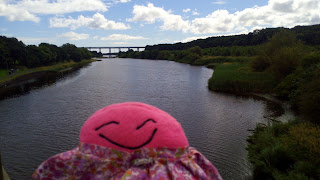 The bridge in the background is a railway bridge but you're not likely to see a train on it now.  Further along there's another road bridge, and then suddenly you reach the sea.  It's amazing there.  When I visited in April my person and I were the only people on the entire sandy beach and we had a little sing before walking the length of the beach to some rock pools and then up onto the cliffs to continue our walk.  I want to walk it again because, as I said, I spent most of that day in the bag and missed out on it.  I've also just suggested another walk to my person.  To walk along the whole coastline and use the road bridge to cross the river.  If we set out early and started at Tynemouth I wonder how far she could get before being too exhausted to continue.  My person isn't very fit.

Here's a picture of Winefride.  We had walked down from the bridge to the river and this is the view upstream. 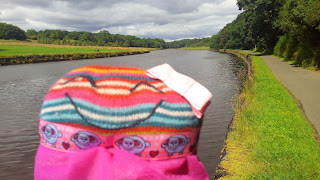 We were enjoying our river walk immensely.  Winefride was taking everything in and behaving very well considering she was less than ten days old.  You can tell she's young.  We hadn't even thought that reins might be a good idea then to help her keep safe.

And then we encountered the first big surprise of the day.  Right there by the river, seemingly nowhere near anywhere we found it:

A play area.  A nearly deserted play area.  I couldn't have been happier and when Winefride saw it she squealed with delight.  She must have remembered the play area she visited in Rhiwabon when she was only one day old.  Her first ever adventure.  We just had to go and play and we all wanted to.  It was amazing and it was very peaceful, one of the most peaceful play areas in the world.  You could sit on the swing and watch the river pass by peacefully.

Here are Winefride and me, sharing one of the swings.  We couldn't see the river when this picture was taken because we were facing the wrong way for the river.  That's okay.  It was the right way for the camera. 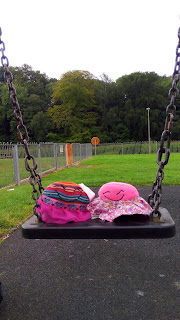 Then we saw a slide.  I have to confess that I was slightly afraid of slides.  I've been on them now and they're okay.  Winefride saw it though and she wanted to see what it was and experiment with it.  She wanted to try everything in the park even though it meant we wouldn't get to Morpeth as quickly.  It was a change of plans and my person isn't always good at those.  She agreed though.  We would climb to the top of the slide and see whether it looked safe enough to use.

The view from the top scared me.  Was I really expected to sit on a big metal thing and trust it to get me to the bottom safely?  Wouldn't it be better just to walk down again? 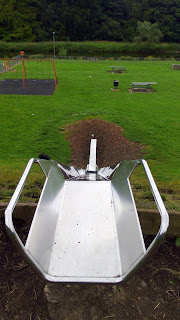 My person assured me that I would be okay and Winefride was getting quite agitated because she desperately wanted to try falling down it.  She is so brave.  Here's my brave sister sitting at the top of the slide before her first descent. 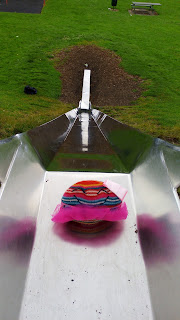 She didn't get killed.  In fact she seemed to quite enjoy herself and when she got back to the top of the hill she was smiling even more than usual.  She huggled up to me and giggled and I decided that I might be able to try to slide too.  Here we both are at the top of the slide. 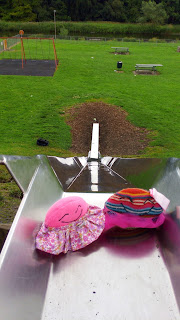 Winefride went first and then I took a deep breath and followed her.  It wasn't the most graceful of rides but it was quite a lot of fun and I wanted to go again and see if I could slide any better.  Winefride of course wanted to go again.  She would have probably stayed sliding all day, all night and into the next week if we had let her.  But then we wouldn't have reached Morpeth.  Maybe that would have been okay though.  Morpeth would still be there to be reached on another day and maybe giving Winefride such hours or days of happy joy would be better than following the plan.

Then I said to my person, "But what about you?  You haven't done it.  You should slide too."

It took quite a lot of bullying and cajoling and convincing and by the time my person agreed to ride on the slide Winefride had slid down and climbed up another four times and she was laughing so much.  I said to my person, "Look how much fun Winefride is having.  You could be having that fun too instead of standing around looking a bit bored and anxious to be walking."

In the end she decided that she would have a go.  She would follow me and Winefride down the slide.  I made another suggestion.  My person should video the experience and then we could show my creator what we had all been doing.  I thought my creator would be very happy to see our escapades and our enjoyment.  She likes play areas and I know she would have encouraged my person to play.

So we all went on the slide.  And my person did take the video.  This one.  Another video for what will become the worst YouTube channel in the history of the universe.  That's what my person says anyway.


It was excellent fun.  Here I am at the bottom of the slide, just before we moved on to other adventures. 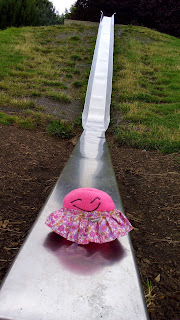 One more adventure in the park to tell you about.  We got to ride on a seesaw. 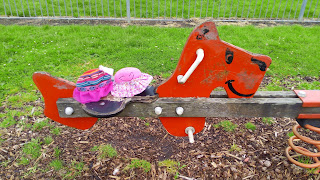 The seesaw was amazing fun but it was very difficult for us to hold on tightly and it was a bit unbalanced because my person is much heavier than me and Winefride put together and she had to be on the other end to do the seesaw work.  What would have been better would have been if my creator was there too and I could sit on one end with my person and Winefride could sit on the other end with my creator.  It would be incredibly good fun. 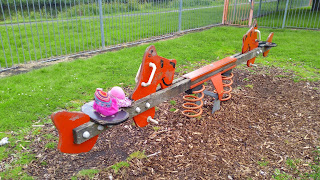 My person said it was time to move on.  She didn't let us stay playing all day and said that we had to continue the walk along the river to Morpeth even though some of the walk wouldn't be by the river at all.  Reluctantly I agreed and Winefride was surprisingly calm about being dragged away from the play area.  It was time to walk again.

Later we would discover an unintentional poem.  My person might have helped me with my blog yesterday if not for that poem.  She looked at the photo containing the words and just had to look something up and ended up browsing most of a book about the voting in Northumberland in the general election of 1841 and then she started reading about poor laws and all kinds of other things.  All very interesting I'm sure.  But it meant I had to wait yet another day to get this post written.  Never mind.  I've done it now.  Maybe I'll find another play area today on our adventure.  Maybe.