My person hasn't been letting me write my blog for the last few days.  And in the last week she has only taken me out on two adventures.  I don't think she has been feeling that great.  But I'm sure she will again and I think that next year will be even brighter than this year.  For me.  For Winefride.  And for my person.

The first of these adventures was to Morpeth but I'd just been talking about the bird that swallowed me whole and I felt a bit nervous so I spent almost the whole day hiding in the bag in case the bird spotted me again.  My person tells me that she did walk past the bird again.  I was glad that I was safe.

The second adventure was very special.  My person took Winefride and me to the Great North Snowdogs farewell event.  All of the dogs were there including the one that we hadn't been able to see because there was no public transport.  I hope that when another trail is organised in 2019 there won't be any inaccessible creatures.  At the event there were lots of signs telling us not to touch any of the dogs.  I felt very sad because it meant that I wouldn't be able to properly meet the last dog.  But then my person gave us permission to break the rules and Winefride and I sat on the dog and had a nice chat.  My person took lots and lots of photos that day and I'll be sharing them on my special Snowdogs blog, Blob and the Snowdogs.  But that won't be until February because I'm only sharing pictures of one dog a day.

On Saturday my person brought a new friend and he's now living with us in the house.  He's very lovely.  My creator named him Merghost on account of him being a Merghost.  He's got a tag with a name on it but I think Merghost suits him much better.  My person liberated him from a church fair at a very low ransom cost of twenty pence.

I liked the river.  The water was extra specially pretty in the sunshine.  My person took a picture of the church and I like it so much that I've given her permission to include it here even though I'm not in it. 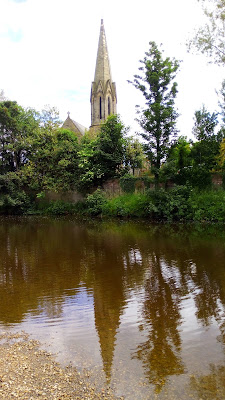 We continued along our route, past bridges, and then we got a view of Lord Collingwood's old house across the river.  There's only a very little bit of it there now but Lord Collingwood probably doesn't mind because he's dead.  Oh no, not recently.  A while ago.  My person says that we have seen a giant statue of Lord Collingwood at Tynemouth and a smaller statue of his head in the Anglican cathedral in Newcastle.  He's quite famous because he won a big sea battle.  Not only did he turn up first but he was the boss sailor at the end of the battle.  He won.  He took over leadership of the battle from a man called Horatio Nelson who died half way through.  Horatio is much more famous.  Even I've heard of him.

Point One:  That means there are six more sets of stepping stones further up the river.  I want to cross all of them.  All of them.  And that means that my person will have to take me on some more adventures soon.  She got told that she would be able to walk along lots more of the river.  I want to do it.  Please person.  Take me back to Morpeth.  Let's walk and find stones.

Point Two:  The sign is lying.  I know it is.  Because I have crossed the stepping stones at a little village called Bothal.  That was an excellent adventure day.  I should blog about it.  We took Winefride on a walk that day from Stakeford to Morpeth and it was wonderful and Winefride made such happy and delighted sounds on the slide in a play area.  Yes.  More stepping stones.  An eighth set of stones.  The sign is most definitely lying and I have proof.

Point Three:  Sometimes the River Wansbeck floods at Morpeth.  The water gets high and covers up the stones.  Sometimes they are covered by feet of water.  My point is that crossing the stones was very exciting for a little toy but I wouldn't want to try crossing them in a flood.

That's enough points.  Here's a picture of me.  I am posing on the stepping stones.  What a thrill. 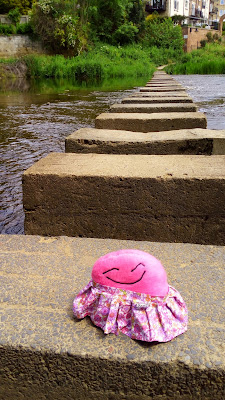 Here I am, sitting on a stone.  The river is behind me.  It's not the best picture but it's hard to take a picture of a toy on a stone like this so I'll forgive my person. 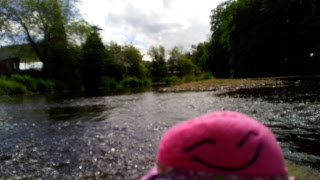 We walked along the river a bit more once I'd crossed the stones enough times.  I must have crossed them an even number of times because at the end I found myself back at the beginning.  We walked.  And we came to a footbridge over the river.  This is the view downstream.  When we were there last week a cormorant was on the river very near the bridge and it was playing and playing and having a lot of joyful time.  It's a very pretty place. 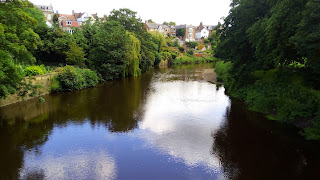 It's so pretty that we met a woman on the bridge who had come on holiday from a pretty and popular tourist place in the south of England.  She said that Morpeth was much nicer.  Here's the view upstream.  My person knows a woman who lives in one of the houses you can see.  It's a very nice house and the garden leads down to the river which is a brilliant thing.  The woman said she has seen otters and kingfishers from her garden.  And a terrapin.  I'd like to see otters and kingfishers.  I think my person would too.  Unfortunately a garden like that is a dangerous thing when floods happen because it might not just be the stepping stones getting covered with water. 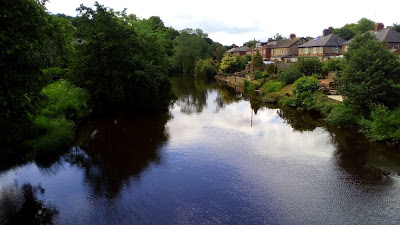 We finally left the river behind.  But we're going back aren't we person?  To walk further upstream.  And you promised you would take Winefride and me on the walk from Stakeford to the sea too didn't you?  That walk was my first ever adventure but my person wasn't very good at adventuring with me then and only got me out of her bag once in order to show that I was having an adventure.  I've spent this year teaching my person how to have adventures with me.  She's getting much better at it.

On the way back to the bus stop we passed this entrance wall.  It's another pretty thing.  We walked through it and circled the churchyard beyond.  We felt tired even though we hadn't walked very far. 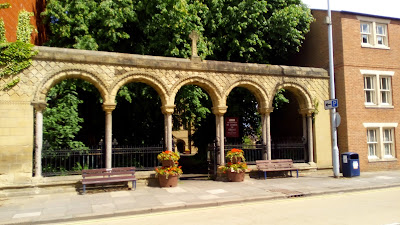 All that remained were chips.  Chips and a bus.

It had been an excellent day.  It's been an excellent year.  Everyone is complaining about how bad the year has been.  I've heard lots of sad and scary things.  But my year has been far better than I ever would have believed it could be.  The Angel of The North told me I'd have excellent surprises coming my way.  And I have.  I think there will be even more surprises next year.  For me.  For Winefride.  For my person.  And for my creator.  I am looking forward to next year even though there are so many challenging things in the world.

In April my person was sent out and told to find one thing of joy.  That's my challenge to you.  Today.  This week.  This month.  And throughout next year.  Find things of joy.  I promise you that they exist.  My person wrote about some of them last week.  There are plenty more.