Our day had been going very well so far.  Any day on which you find a surprise deserted play area cannot be marked down as a failure.  We were quite sorry to be leaving it.  At least Winefride and I were.  I'm not sure my person would have wanted to stay there.  She wanted to carry on with our walk.  Winefride just wanted to stay and play all day and I was torn.  I like playing.  And I like walking and exploring.  The swings and the slide had been a lot of fun and I didn't know when I would next get the chance to play.  But I knew there was an adventure ahead that had been very carefully planned.  So carefully that we would still lose our way a little.

So we walked on from the play area back along the path alongside the river Wansbeck.  It was at that point that I realised something.  I think my person realised it too when I mentioned it.  I found that I really needed to go to the toilet.  Maybe that's too much personal information for a blog post?  Well you need the toilet too don't you?  It's nothing to be embarrassed about.  People are very strange with the ways they get embarrassed about normal things that everyone does.  I've heard tell that people used to sit together on toilets that had lots of seats.  I don't think many people I've met would like to do that sort of thing now.  I've asked my person and she said that her great grandparents had an outside toilet with three seats but that she wouldn't want to share a toilet with anyone.  I think it's funny too how there are different rules for toilets.  How standing up toilets can be a shared experience but sitting down toilets can't.  Having said that, I get a bit embarrassed too.  Because it's not usual for small soft toys to need the toilet.  Or to eat cake in cafes but I really enjoyed my cake yesterday and the salad I helped my person eat.  I'll blog about that cafe sometime.  They sell tea.  Lots of tea.

So I needed the loo and so did my person.  Whatever were we to do on a riverside path?  Fortunately we were presented with a solution.  Within a few minutes.  A solution.  Hoorah!  Hoorah!  Two cheers for the solution.  Two cheers for blessed relief for my person's bladder and my whatever it is in the anatomy and physiology of a soft toy.  I don't think I actually have a bladder but I haven't ever been X-rayed and I'm not ever going to let anyone dissect me to find out what's inside me.  Maybe my creator knows the answer but she hasn't told me.  Maybe she doesn't know what's inside me at all because she didn't know that I was inside me did she?

A solution.  A solution.  We saw a sign pointing the way to a public toilet.  I was very pleased.  Happy that such places exist.  So we followed the path to the toilet.  And our joy turned to despair.  Despair!  Because this was the public toilet the sign had pointed to. 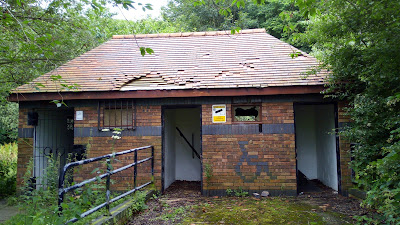 It didn't look very promising.  Fortunately my person isn't a man because the men's toilet was locked.  We looked in the women's toilet and then had to look inside the disabled toilet too.  It wasn't in the best of condition. 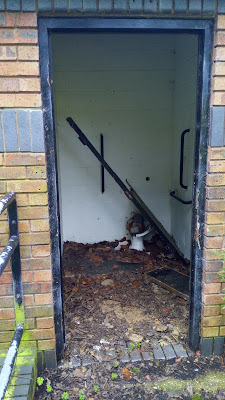 But what to do?  What is a soft toy meant to do when the public toilet turns out to be a very public lack of toilet?  I could have got quite worried about that.  I didn't.  I'm a very sensible soft toy.  I knew what to do.  I would find a quiet place out of sight of all paths if possible and pretend that the ground was a toilet.  I told my person to do that too but she seemed to already know about such desperate courses of action.  She's quite lucky really because things like this are easier for her than they are for most women.

We walked on from our successful toilet of whatever manner it was and continued alongside the river.  It wasn't long before we approached one of my favourite things.  A bridge.  This one in the background.  It carries a road.  Immediately behind it is another bridge.  That carries a footpath. 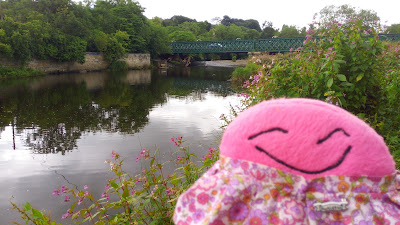 We didn't cross the bridge.  That wasn't in the plan.  And we had a problem.  From this Sheepwash Bridge - for that is its name - we couldn't continue any further along the river.  There was no path ahead on either side.  It makes a river walk quite difficult when you can't get to the river.  So we had to walk a very different route and try to get back to the river at a different point.

Our route was very steep.  First we had to follow the steep road for a while and then we left it and joined a steep footpath.  Somehow we would find our way to the correct other end of the footpath and find a way back to the water.  Spoiler alert:  We did it.  And it was worth doing it.

It really was steep.  And there were trees for my person to photograph.  Here's one.  Maybe there will be others if she writes her own blog about the day.  She could certainly make a blog of the graveyard and took some nice pictures there, even some without Winefride or me in them. 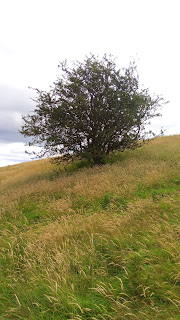 Eventually we made our way back to another road that we could follow back towards the river.  First we had to pass through a place called Bothal, a place where (rumour and hearsay has it) there are many witches covens.  I can believe the rumour and hearsay.  The whole place did feel a bit funny.  I liked it.

I was going to tell you all about our adventures in the village today but I've talked enough I think.  You'll have to wait until the next post to hear all about the magical graveyard from the title and see lots of lovely pictures of us there.  It was a beautiful place.  I wonder if we'll ever go back.

My person says I should apologise for talking so much about toilets that I couldn't talk about more interesting things like the mysteries of Bothal.  If you've been at all offended by it then I am sorry.  That wasn't my intent.  I just wanted to tell you what happened.  I promise that next time I will get on and tell you about how strange life was in Bothal.  I think we were quite lucky to have escaped.  I don't know whether any of the covens are evil or whether they battle each other with terrible magics but the thought of my sister Winefride being sacrificed to appease some crazy demon fills me with horror.  Perhaps we were being protected by the incantations of a green witch all the time we were there.  Perhaps.  Even if you doubt it I dare to say that you can't prove that it didn't happen.  I'll tell you about it next time.

Love to you all.