This means that his person has the chance to write a short post for the blog without Blob talking about all kinds of crazy things.  She would apologise for the presence of purple polka dot uniformed janitors in the last post.  Except she does know that there are tunnels under the city of Newcastle.  So maybe there is an element of truth to the story.  She wants to take Blob and Winefride out to explore one of the tunnels one day.  There's an element of truth to that too.  The full truth is that she wants to take herself out to explore the tunnel.  She's just using Blob and Winefride as an excuse to finally get round to it.

Hmm.  Blob and Winefride may be asleep but Blob's person is currently being stared at by six of their friends who are all wondering what she will type next and whether she will spoil Blob's blog in his absence.  She's been known to muck things up before!  They are sitting there on the sofa watching her.  A bear, a monkey, a panda, a tiger, a hippo, and a giraffe.  Blob's person could almost start a zoo.  Almost.  Except she only has one of each animal.  So that wouldn't be good.  In any case, soft toy friends do not belong in a zoo.  It's worrying enough when they get old and are forced to retire and live locked away on the shelves of museums.  Putting them in a zoo - even if it was a petting zoo - wouldn't be right.  They are friends.  Not exhibits.

Five of the six animals continue to stare.  The sixth, a hippo named Buttons, has drifted off.  He's looking up at the ceiling.  Blob's person guesses that he is lost and content and focused on the bumps and patterns in the artex ceiling.  Blob's person doesn't like artex ceilings but confesses that there were plenty of times in childhood when she lay in bed and played happily in the shapes above her head.  She would be joining Buttons in playing the ceiling games if she wasn't meant to be writing Blob's blog.  Buttons wouldn't mind.  But maybe the tiger and the panda would cross the room and annoy her until she drifted back into a state in which she could type again.

Today Blob's person wants to talk about a little adventure Blob had.  He had been on holiday with his person and his creator and they had all taken a trip to the Fylde Coast.  Together they had gone to explore the exciting charity shops in a place called Cleveleys.  Cleveleys.  What a funny word.  Blob thought it was hilarious.  It reminded him of handkerchiefs for some reason and he imagined that a giant had been walking along the Fylde coast on a chilly winter day.  The wind was blowing fiercely.  Just to the north, in Fleetwood, the wind often blows fiercely.  The giant had felt a tickle at the back of his nose and it got increasingly tickly until he knew that he had no option but to sneeze.  It was then that he realised he had dropped his handkerchief in a murky black pool and it was still soggy and covered in algae so he couldn't use it to catch his sneeze.  Instead, the giant sneezed out an entire town, which in time grew to be the place it is today.  The original name was handkerchief.  History records it then progressed through, kerchief, kerchiefley, kerchieveley, chieveley, and eventually became known as Cleveleys.  Most people have forgotten the original derivation and prefer to imagine the word comes from an Anglo-Saxon word meaning a wood by a cliff slope.  Blob prefers his story.

The story of the giant hasn't been totally forgotten.  It's true that it has transformed a little.  It's also true that only some of the local artists and bards remember it at all.  And it's true that in most surviving versions of the tale the giant has become a different creature.  Blob Thing was very pleased because while he was in Cleveleys he found evidence of the story. 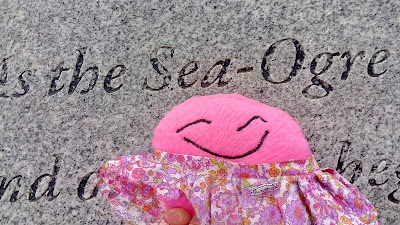 Yes.  It's true.  The giant had become a Sea-Ogre.  An ogre who had planted the first woods on the cliffs near the town - woods that you won't see now because he also harvested the wood to build himself a thirty-eight bedroom mansion in the nearby swamp land.  The ogre didn't disturb the people who settled the area very often apart from stealing the odd sheep and getting drunk once every seven months at the local inn and breaking a chair.  He was very good about paying to replace the chair.  He was very bad at replacing the sheep.  But who is going to argue with a Sea-Ogre about the odd sheep?

But then in the nineteenth century the swamp was drained to make way for more houses and for farming.  The ogre couldn't cope with living in the middle of a dry field and he went on a rampage, destroying half of the town, before slinking off in a sulk back into the sea.  His mansion fell into disrepair.  If you can find them, the foundations are still just about visible at the edge of a car park on the way to Fleetwood.

The ogre has hardly been seen again but sometimes in the storms, when the wind is just right, the people of Cleveleys can hear him singing a lament for his lost swamp.  He sings a verse for each of his thirty-eight bedrooms and another one for the outside toilet.  And then he is silent.  Most local people don't know what the song is and assume it's just the whistling of the wind.

In 1956, Albert Brown, who had moved to the area from India, started a fund to create a brand new swamp for the ogre and build a new house for him.  But the people didn't contribute much.  They preferred to forget about the ogre who had stolen sheep and broken chairs.  Evidence is still there to be found.  Blob Thing had found the evidence. 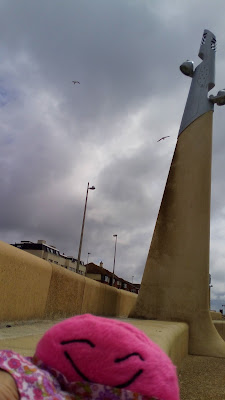 Near to the mention of the sea-ogre, Blob spotted a very tall sculpture.  He doesn't know whether it had any connection to the ogre story or whether the shapes at the top are some surreal representation of the ogre heading off to sea in his sulk.  Blob doesn't know.  The internet claims that there is no connection.  Then again, the internet has no mention of the story of the giant.  It just goes to show.  You can't trust everything you can't read about on the internet.  The internet does mention that there is a four metre high representation of a sea-ogre near the beach at Cleveleys.  Blob Thing didn't see it.  But he's very glad that the stories are not entirely forgotten.

Blob likes stories.  He doesn't mind whether they are true or not.  That only matters when people go further with them and form religions or creeds around them.  Then it becomes a matter of faith that the story has to be true.  Jesus must have done this.  Muhammed [PBUH] must have done this.  Krishna or The Buddha or Thor or whoever else must have done this.  It's a matter of faith and stories that are often magically beautiful truths become killed when they are seen as the truth.  Blob likes to hear stories and tell stories and he's very glad that his person lets him and that she's able more and more to join in with the world of the story.  Blob's person says that she likes a writer called Madeleine L'Engle who said that a good story is truth, whether or not it is true.  Blob isn't sure he agrees.  A good story might not contain much truth at all.  It might just be an adventure.  But a good story must touch us in some way and make us pleased to have read or heard it.

Blob's person and his creator sat on Cleveleys seafront.  They had bought themselves a portion of chips each for lunch.  The portions were enormous.  Blob's person had also ordered a portion of scallops and that was enormous too - with more scallops than expected too.  If you're thinking that they were all being very posh to order scallops to eat on Cleveleys seafront, they weren't.  In the language of the Fylde and some places beyond it a scallop is a slice of potato deep fried in batter.  The portions were so enormous that Blob's person almost wished she hadn't asked for scallops but it was all very tasty so she only almost wished.  Blob was there and he got through quite a lot of the chips himself but found the scallops a bit difficult to manage.

Afterwards they sat and looked out at the sea. 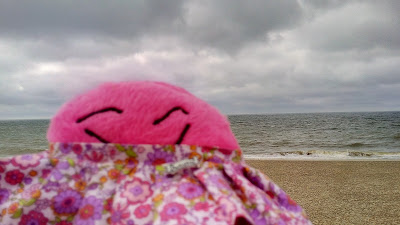 Blob was enjoying himself.  Any day with chips by the sea can be a good day.  And this was an extra special day on which he had learned two different stories of the foundation of Cleveleys.  It didn't matter whether they were true or not.  They were stories.  Stories that had touched Blob.  They had amazed him and made him laugh too, almost as much as the name of Cleveleys itself.

The day wasn't over.  Soon the three adventurers got up and continued their explorations.  They would go to Fleetwood.  It might be excellent.  Or it might turn out to be a bit crap.  Blob didn't know.  He was very eager to find out.

Blob Thing is still asleep.  His person hopes he's not disappointed in what she has written for this blog post.  The monkey and the tiger seem to approve.  The hippo is still lost in the patterns on the ceiling.  Good grief.  Wouldn't it be a thing if Buttons turned out to be autistic too?  Maybe he is.  He's totally gorgeous though and there are plenty of friends to look after him if he needs any help.