Blob Thing was having an amazing day.  He was walking from Sunderland to North Shields on a walk as part of the activities people in Sunderland were involved with for Refugee Week.  Blob was very happy because he was going to get to see all the things on that route which his person had seen without him a few weeks a few weeks earlier.

So far Blob and his person and all the good people had walked from a bridge over the River Wear all the way to the sea.  Blob thought that was quite a long way but then learned that it was only a tiny distance compared to the entire walk.  North Shields was, as a name suggested, north of them.  Blob Thing bravely said that he would be able to walk all that way and his person promised to carry him if he got too tired.

There are places further away than North Shields.  Blob Thing was quite pleased not to be walking all the way to this place.  He didn't think he would manage such a long journey in one day.  He was also a little confused as how he would walk there at all.  The first part of the walk would be easy enough.  But that would only take him as far as the end of Roker Pier.  After that there looked to be an awful lot of water, stretching out further than he could sea.  Blob Thing didn't want to walk that way.  He hasn't got direct evidence of this but he believes that he would be unable to walk on water.  And he knows that his person would sink immediately.  Walking under the water would be tough too.  Blob wonders how the people of Sunderland expect him to walk to Germany.  Are they crazy in Sunderland? 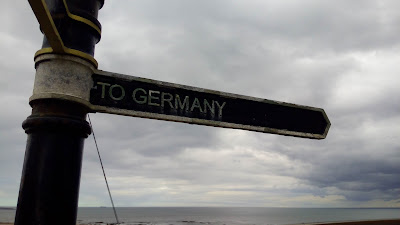 Continuing on the walk, Blob Thing spotted a covered area and in the darkness beneath there was lots of art.  Every wall in that darkness was painted with a different picture.  Blob likes pictures.  And his person likes taking pictures of street art.  Blob especially liked this door.  He wants to know where it leads and whether it's a friendly lion.  He says it would be a bit scary to use the door knocker in case it was a particularly sneaky lion using a door knocker as bait and as soon as you lift the knocker it would lunge forward and bite you.  Blob Thing, being small, would be entirely eaten with a single bite from a lion.

But Blob still would like to knock on that door and gain entrance to the world behind the wall.  A hidden part of Sunderland full of misfits and clowns and mutants and all the magical creatures that have been pushed away from the surface by an unbelieving, unaccepting world above.  Blob says he wants to visit that world.  He knows that there are stories people have written about similar hidden worlds.  But maybe the one in Sunderland is real.  He thinks it's almost a shame that he didn't get a chance to knock on the door.  Almost.  Not quite, because if he'd explored the below world then he would have missed the walk. 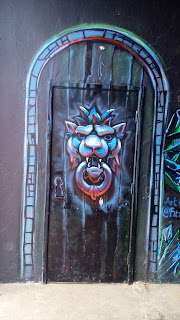 Here's a less scary picture.  Blob liked this art a lot.  He wonders how many people walk by without giving it a second thought, without even noticing that it's there.  Blob's person missed it the first time she passed.  And the second time too.  Both times she was walking on the beach rather than on the path above it so she couldn't see the pictures and get excited by them.  She was very glad to have been there to share the artistic experience with Blob that day. 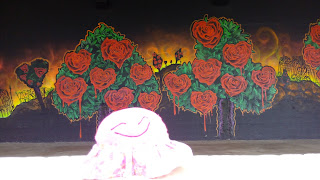 The brave walkers left the path.  Or rather the path left them.  There was no more path to follow and so they had to walk along the beach.  It was wonderful.  Here are a couple of the walkers still holding up the banner.  They didn't hold it up for the entire walk.  There wouldn't have been a lot of point along a deserted clifftop path.  One of the people below is a refugee.  He's been in the United Kingdom for some years building a new life and could tell you stories of why he had to leave his country of origin.  Refugees are sometimes demonised in the media.  They're often portrayed in ways to dehumanise them too so they become just statistics rather than people.  But the refugees on the walk were all very human indeed.  None of them wanted to leave their countries.  They had to. 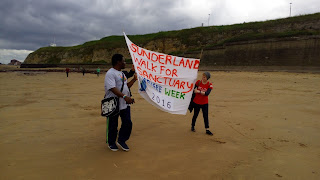 While on the beach, Blob spent some time trying his hand at a career.  He decided it might be nice if he were to become a lifeguard.  He could just see himself patrolling the beach and decided a beach would be a great place to work.  Blob imagined himself carrying that surfboard down to the sea and going and rescuing people who would be eternally grateful.  He would make an excellent lifeguard. 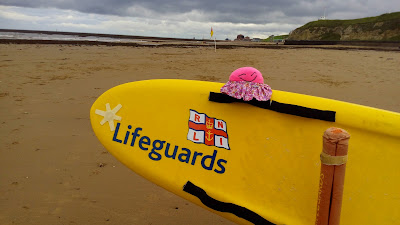 It was a nice idea.  But even Blob had to admit that it wasn't practical.  There are a few slight problems with bringing that idea to reality.


and the big problem:

After walking along the beach the walkers found a path again.  They were all feeling a little tired and they were still in the city boundary of Sunderland.  A very long way to go.  The path reached a road and there, to everyone's happy reaction, were two cars owned by friends of the walkers.

The cars were laden with food and drink and everyone was pleased that it was time to stop for refreshments.  You can see that they hadn't walked very far.  Here's Blob at the refreshment stop and behind him you can still see Roker Pier.  This was turning into a most stupendous adventure. 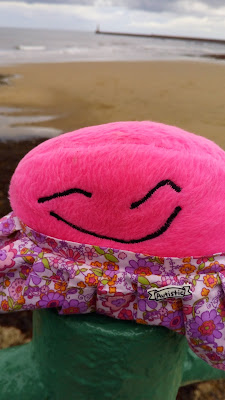 Here's Blob at the refreshment break.  It was good to sit for a while.  Blob's person was really pleased too.  She was able to put her rucksack in one of the cars for the rest of the walk.  Normally she carries far too many things when out walking.  Just this once she would be able to walk free from all of it 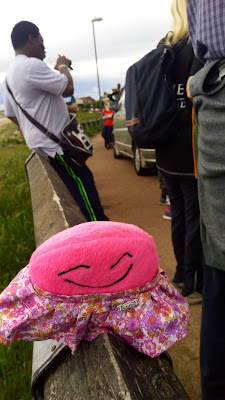 Blob was glad that he and his person had met the refugee walkers at the start of the walk they had planned to do.  He was sure that the original plan would have been a good one.  But this was a better one.  He was happy that things had worked out so well.  If they had travelled on any other Metro to Sunderland they would not have met the walkers.  If the walkers had set out a few minutes earlier or later then they wouldn't have been crossing the bridge just when Blob was.  And if the Metro had been delayed at all - which is not an uncommon possibility - Blob would have been walking South that day instead of North.

Sometimes things just work out.  Sometimes there are brilliant surprises.  And sometimes you have to run with open arms into the surprise.  There's a lot of life out there.  But it has to be seen with open eyes and grabbed with eager hands.  That's Blob's view, and he's sticking to it.