Blob Thing had been having a very exciting day.

It hadn't begun well.  He woke up in his Newcastle home like he does most days.  From that moment the day got off to a very difficult and stressful start.

Blob sat around at home while his person put lots of things in a big bag.  What was happening?  Was she having one of her massive clear outs again?  Were all these things really being sent to a charity shop?  Blob thing watched carefully as she sorted out more and more things and put them in the bag.  It seemed a strange selection of things to be sent to charity.  The clothes all looked like good ones, full of colour.  They weren't the usual boring clothes that Blob's person seemed to have an almost infinite supply of.  Why was she getting rid of the good clothes?  Blob didn't quite understand.

Blob wondered if his person was going completely mad.   He's not the only one ever to wonder such a thing.  Some people see these blog posts or her Facebook updates and wonder if her fragile grip on sanity has been lost, leaving her falling, falling, falling into the heaven and hell of those whose minds cannot exist in their lives.  Blob Thing got a bit worried and his person kept putting things into the bag.  Her nail clippers.  A razor.  A couple of books that Blob knew she wanted to read.

And then things got worse.

Blob's person packed Amethyst into the bag.  Amethyst.  Her friend and his friend.  One of the friendliest soft toys you could possibly wish to live with.  But that wasn't right.  Blob's person loved Amethyst.  Didn't she?  Was Amethyst really being given to a charity shop?  Had Blob's person lost all sight of reality, of love, of the way that Amethyst had cared for her in the darkest nights?

Blob thing watched and was distraught.  He had never before been this worried about his person.  Or about Amethyst.

This had to stop.

He was crying by now and afraid of what might happen but he approached his person and through tear soaked eyes asked her what was going on.  Why are you packing Amethyst away?  Are you really getting rid of her?  Will I be next?  What's wrong with you and can I help?

Blob's person stopped.  At that moment she had been packing her hairbrush into the bag.  She put it down instead on the bed and turned and looked at Blob Thing, who by this time was getting a bit soggy from his tears and the front of his dress was soaked.

She smiled at Blob.  She picked him up and held him close to her.  Then she sat on the bed and started to rock back and forth and said that she wasn't going to send any of those things to a charity shop.  She told him that he didn't have to worry and that she was perfectly okay at that moment.  She wasn't packing Amethyst and her knickers to get rid of them.  She wouldn't do that.  Not ever.  Amethyst was far too precious.  Amethyst had been the first of the new friends, back when Blob's creator had told his person that she needed a friend for cuddles.  Amethyst wouldn't be sent to a charity shop.  Blob's person said that her knickers weren't as precious as Amethyst.  But they weren't being sent to a charity shop either.

Blob's person held him tighter and rocked more and kissed him gently on the forehead.  The two of them stayed like that for a while and Blob managed to stop crying.  He was still a bit snuffly though from the tears when he asked his person, "Well why are you putting Amethyst and your hair brush and medication in that bag?  Why?  why?  why?"

His voice got very quiet.

And that's when the day improved.  A lot.  That's when it got exciting.  Blob's person said that they were going on a little holiday that day.  They were going to go and stay with Blob's creator for a few days.  And while there they would have lots of adventures and Blob could be cuddled by his creator.

Well that changed everything.  Slowly he calmed down enough so that her person could put him down without his tears welling up again.  And eventually he managed to smile and then he started to get very excited.  A holiday.  His creator.  A coach ride.  Adventures.  Meeting all of his creator's friends again.  Seeing the place in which he was created.  Maybe one day that house will be a sacred shrine.  Or at least it will have a blue plaque.  At least.  That's the minimum honour that should be afforded to that house.  A plaque.  With a simple inscription. "In this house, Blob Thing was created.  2015."

Blob's person finished the job of packing the bag, being careful to arrange things so that Amethyst wouldn't get too squashed.  By the time she had finished packing it was already time to leave and begin the journey to Manchester.  She picked up her rucksack.  Grabbed the handle at one end of the big bag.  And picked up Blob Thing.  She definitely didn't want to forget to take him.

By the time they reached the coach stop Blob had almost forgotten about how stressful the day had been so far.  His fur and dress were almost dry and his smile was as wide as it always is.  Blob's person finds the coach journey quite boring unless she can read - which she usually can't.  But Blob Thing finds it very exciting.  He enjoys watching the world passing.  The cars, the trees, the fields, the clouds, the towns.  Everything.  He even enjoys joining in when his person is passing the time counting bollards or concentrating on the numbers on the posts by the side of a motorway or the numbers on the lamp posts, or when she is making almost imperceptible movements with her thumb or finger as if they are jumping over the cars or the lamp posts or the trees or the bridges or the road signs.  Blob's person has always done things like that.  It's the way she gets through journeys.

At the coach stop Blob's person wanted to tell her off a little.  They had arrived there over an hour before the coach was due to depart.  Over an hour.  Blob wondered why they had left so early.  Blob thing said things like "What if the Metro was delayed?"  "What if it was cancelled and then the bus didn't show up either?"  "What if four Metro trains in a row broke down or if they got stuck in a queue for two hours in the tunnel between Jesmond and Haymarket?"  What would they do then because they would miss the coach and that meant they had to leave home as early as they had.  So they couldn't possibly miss the coach.  No way.  At all.  Better very early than later.

Blob had to admit that his person had a point.  He wouldn't want to miss the coach and so not be able to go and stay with his creator.  But he thought she still left far too early and waiting for over an hour on a city street for a coach to happen wasn't his idea of fun.

Still, there was a journey to look forward too.  Maybe they would even be able to have the front seat again.  Maybe there would be some particularly beautiful cloud formations.

And then they would be in Manchester.  And Blob's creator would be there.  And they would have lots of adventures.  Blob's person told him that they had a big adventure planned for that evening.  A BIG adventure.

Blob Thing had been planning on telling you about his big adventure today.  Or at least half of it.  It was such a big adventure that he was only going to tell you about half of it today - the half in which he scaled the thirty-nine steps and watched while a man thwarted an evil plot.  That was an excellent adventure.

But Blob has told you instead of how scary the first part of his day had been.  He had been planning on mentioning it but while sitting discussing his post with his person he decided that he should tell the whole story.  It's not always smiles and joy and fun for Blob Thing.  Sometimes it's a bit scary too.  Sometimes things don't go right.  And sometimes he has to work very hard to look after his person.  Sometimes she's not doing well at all and Blob doesn't ever let go when she's struggling.  Blob loves his person and he is a very fantastic soft toy friend.  [Blob said that this post had to include that sentence.  It's true.  But maybe he's bragging about it just a little bit.]

Blob hasn't got time to tell you about his big adventures.  He had all the photos sorted too.  He feels a little bad about it though because when his first post was written - a process he didn't have a lot of input into because his person hadn't foreseen how much he would have to say for himself - it was promised that every day there would be a photo of an adventure Blob had.

And today there hasn't really been the tale of an adventure.  And no pictures were taken of Blob crying his little heart out or of Blob waiting for the coach.  That's not surprising.  But Blob wants to include pictures anyway, even though they will have nothing to do with his adventure.

The first picture is connected.  This was taken while walking from the Metro station to the coach stop.  Blob Thing would probably talk about this saying for a long time were he allowed to do it at the moment.  He's not being allowed but will say that he is true to his own self and that his person is gradually learning to be true to her own self.  That's all Blob is being allowed to say about it.  Nothing more.  No Blob.  No.  Maybe another day you'll have a chance. 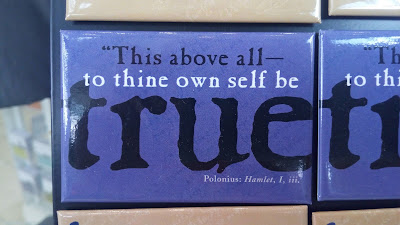 The other photo was taken in a field about the little village of Giggleswick.  Blob Thing hasn't ever been there but in five days he'll be there.  It's where his person and his creator first met.  Not in this field but not very far from it.  This photograph was taken on a very special day when something very special happened.  And without that something Blob's person and his creator might not even have talked with each other once since leaving Giggleswick.  Without that very special something, Blob Thing probably would not have been created at all.

Blob Thing is looking forward to going to Giggleswick.  He's going there for an autism conference run by and for autistic people.  He thinks it will be amazing to be there.  And he's taking his sister too and promises that he and his person will look after her very well. 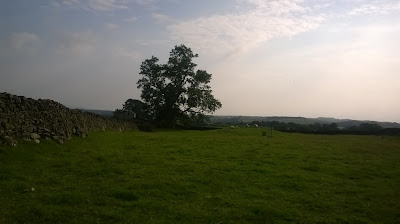 [1961 words and I don't know what's going on with the formatting - no matter what I do the software refuses to make the text the right size.]
Posted by Clare Matthews at 18:02