First she went out without him.

Then she hijacked the computer and wrote her own words about something before even thinking about him and his blog.

And then she claimed to be too exhausted by the day to be able to type anything on his behalf.  She really is tired.  Being out today was hard for her even though she accidentally met a nice person and even though she bought yet another friend - liberating it from a shop.  Her new friend now joins the ranks of freed friends and is no longer classed as property.  He's a hippo and he's very soft.  Blob thinks that Buttons the Hippo is a fine addition to the friends in his house.  He guesses that Buttons will get on very well with Gerry the Giraffe.

Blob Thing wonders whether his person would be less tired if he had been with her when she was out.  Then they could have looked after each other.  He also wonders whether she should have helped him with his blog before getting on and writing her own.  Blob's person says that actually she wants to write other things and not just help out with Blob's blog.  She's happy to help him but there are stories to be written and photos to be posted and thoughts to be expressed.

Blob became a lot happier with his person when she agreed to help write this post.  He got up this morning greatly looking forward to writing about this adventure.  And then his person did something else.  Not anything important.  She wasn't functioning all that well this morning.  She went out though to do three very specific jobs.  And she successfully did one of them.  She couldn't cope with thinking about the second and completely forgot the third.  Never mind.  Next time Blob Thing says that he will be there to help.

He wants to get on with the adventure now, conscious of the fact that his person is very short of mental energy and that if he doesn't begin now she'll just stop typing and curl up in a ball.  Blob says that later she should pull the curtain, lie down on cushions and blankets and get Ann to light up the ceiling.  Ann is good at lighting up this ceiling.  She's a unicorn.  Blob says that he wants to introduce his friends on his blog once he and Winefride get back from their autism conference.

Blob Thing and his person had arrived in Manchester to stay with Blob's creator and after some food they were going to go back out again.  Blob was so pleased.  That morning he had been in his Newcastle home, crying copious quantities of tears.  And now here he was in Manchester about to go out on an adventure.

Blob's creator told him that they were going to go out to a place called The Lowry.  They weren't going to meet the painter there whose paintings are hung almost unnoticed in an art gallery cafe in Newcastle.  The painter wasn't going to be there.  They were only going to a place named after the painter.  It was a theatre.

Blob got very excited.  The last time he had been in a theatre was in Manchester too and on that occasion he had been able to walk on the stage.  He's already posted about that day and the round and round stage he trod on and about how illogical he found the security guard at the theatre.  Blob's person told him that it was very unlikely he would be able to be on stage that night.  He wouldn't get close to the stage at all.

The trio got to the theatre in time for the beginning of the show.  Yesterday Blob laughed at his person because she set off so early for to catch the coach.  Well today he is amused at how early she wanted to set off in order to get to the theatre on time.  She tells him of times that she didn't set off quite so early as she wanted and how everything went wrong.  But Blob hasn't quite got over waiting for the coach in Newcastle for over an hour.  It's not the only time that's happened either.  In any case, that evening they were all at the theatre in good time.

The seat was very good and very comfy and the view was excellent.  Blob's person had booked the tickets and she had done well.  Their seats were on a balcony level.  But they were in the front of the balcony and right in front of the middle of the stage.  She said that she hadn't really done that well.  It had just happened that those seats were the best available. 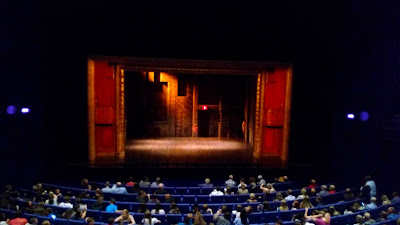 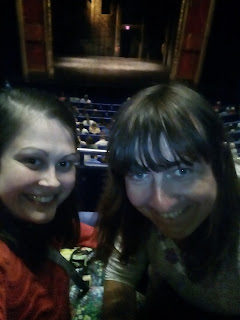 Blob had to be held very carefully.  He didn't want to fall off the balcony. 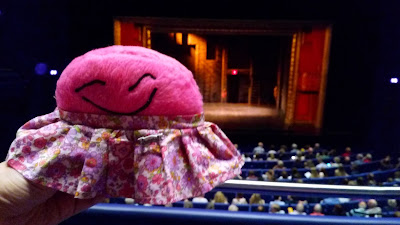 The play was called The 39 Steps.  Blob's person said that she knew some of the story because she had read the book, seen three movie versions, and also seen a television series.  She said it was about spies and danger and action and adventure and assured Blob that he would enjoy it.  She also said that this production would be a bit different from all those movies.  For a start there were over one hundred characters but they would all be played by only four people.  And while the movies had all been quite serious, the poster for this show said that it was very funny.  Blob's person didn't quite know what it would be like and didn't tell Blob much of the plot.  He could find out for himself.

It was ever so enjoyable.  Blob had never seen anything like it in his life.  An actor would be one character and would almost instantly transform to be another character.  It was amazing.  There were chases and thrills and romance and train rides and even a theatre within a theatre.  And it was funny and Blob chuckled to himself all the way through.

Blob Thing enjoys the theatre and hopes to go to see another show soon.   He's very fortunate because he doesn't need to buy a ticket.  Next time he wants to take Winefride with him.  As long as the material isn't too mature.  He felt that some of the things in The Night Watch had been far too mature for him - if sex things are a sign of maturity, which Blob Thing doubts.  But there didn't seem to be anything like that in The 39 Steps even if there were some jokes he didn't really understand.  The poster was right.  The show had been for the whole family.  A family of three.  Blob.  His person.  And his creator.  Next time it'll be for a family of four.  Maybe they can even take another friend too.  The red panda or the slow loris would surely love a trip to the theatre.

After the show was over the trio left the theatre.  On the way they passed some very strange people.  One of them was doing something quite bizarre and when asked why he was behaving in such a curious manner he said it was because he was an actor.  Everyone with him laughed a lot about that.  Blob, his person, and his creator couldn't begin to understand why they were laughing.  Surely being an actor doesn't mean that you behave in curious, bizarre manners when leaving a theatre.  Unless there are rules for actors that Blob doesn't know about.  It was all pretty incomprehensible.

The three people, behaving an a manner less bizarre, walked out of the building.  It was then that they discovered several things:

1.  The sun was setting and it was starting to get dark.

2.  It was quite quiet compared to how much noise there had been when they entered the theatre.

The bus stop was in a pretty place, between two big lakes.  Since there was a wait, there would be just enough time for another adventure.  Blob will tell you about that tomorrow.  For now, here's a photograph taken.  This is part of Salford Quays.  And in the diminishing light it was a gorgeous place to walk and sit and let calm arise after the excitements and laughters of the theatre. 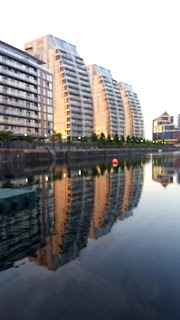 [1426 words and a Blob's person slightly grouchy at the spell check that, even though she thinks she has set everything to understand British English - the English of England (although that's a variable thing too) - it still thinks that theatre isn't a real word.]