Blob Thing has spent several days telling you about his exciting trip to the Literary and Philosophical Library in Newcastle.  It was obviously very exciting because he had fallen asleep and his person had fallen into an even deeper slumber.  Blob thinks it's almost a miracle because she normally finds it very difficult to get to sleep.  Blob thinks it's very funny because his person had a bump on the back of her head for almost a week from where the librarian hit her with a large hardback book to wake her up.  He's sitting there now, laughing his head off.  It is unclear what he is laughing his head off from as his head isn't attached to a neck, let alone a separate body.  Maybe that's one of the advantages of having a head and body all in one, of being a special kind of blob.  It means that you can't literally laugh your head off.

Humans of course don't have this advantage and when particularly hilarious comedians appear at a comedy club like The Stand in Newcastle**, they very often have to pause their act so that people can get up and find their heads and fit them back on again.  Sometimes that can become funnier than the comedians because the headless people bump into each other.  It gets so madcap that more people lose their heads over it.  Then the staff at the comedy club blow a big hooter and tell everyone to sit down on the floor while a group of janitors dressed in purple polka dots go round and try to match up heads to bodies.  It is unclear as to why the club thinks that purple polka dots make a good uniform and it's unclear as to what the janitors are doing during the rest of the evening as their sole job front of house is head sorting.

It is suspected that they voluntarily inhabit a back room in the club where they spend their time writing poetry for fun and hit situation comedies for cash.  Another theory says that the janitors are sorcerers from another world who appear only when needed for their head attachment role.  A third theory says that there is a secret tunnel leading out from the club and heading deep under Bigg Market and eventually under the Tyne to Gateshead where they work as security guards in a shoe shop.  Nobody knows which, if any, of these theories are correct.  The janitors refuse to say.

Any mistakes can be sorted out at the end of the show.  The janitors usually get it right with the help of the heads telling them roughly what body to look for.  But sometimes they get it very wrong indeed.  The man whose bulging head, bald save for a grizzled beard, should have been paired with the body of a six foot ten body builder was the most difficult case the club had seen.  The janitors attached his head onto the body of a proverbial eighty-nine pound weakling.  He got very angry indeed and went on a rampage and tried to break up the bar.  Being an eighty-nine pound weakling he couldn't do much damage.  The actual head of the weakling - weak only in body, his mind was one of the most powerful in Europe - stood and watched in disbelief and then flexed his muscles for a while.  It was the first time he had flexed his muscles.  Eventually the body-builder's head calmed down and both men were offered tickets to another show and a free meal from the rather gorgeous restaurant at The Stand.

On one occasion someone tried to get away with leaving the club with their head attached to someone else's body.  She decided that having the kind of figure that could adorn the front cover of Vogue might be nicer than having the kind of figure that the fashion industry thinks is inferior.  Silly fashion industry.  Fortunately that woman was stopped at the door and the rightful owner of the body had it restored to them.  The woman was later sentenced to 240 hours community service and had to go on a re-education course about why being skinny doesn't make you a better person.

And then there was the time that a caretaker was sweeping up late at night after a particularly funny improvised show and found a head under the table.  The staff were all called back and the building was searched but no body was to be found.  When police examined CCTV in the small hours of the morning they discovered that a headless body had been carried out by a group of people who looked to have had possibly half a drink too many.  A body hunt was started and the police were considering trawling the River Tyne.

They were just about to call for the search vessels when the club received a very sheepish phone call from a woman.  She had woken up that morning with a terrible hangover and her husband wasn't in bed with her.  She was worried by his absence.  Then she was surprised and a little distressed to find him sitting downstairs on the sofa without a head.  It took a while but the events of the evening came back to her.  They hadn't even realised they had left the club in a group of five bodies but only four heads.  That's what booze can do.  Blob says [yes, this is his blog even though he hasn't been mentioned] that a little bit of alcohol in moderation is fine even though it's a poison.  But getting drunk is something that Blob would advise everyone not to do if they can help it.  It can lead to scenes such as leaving your head in a comedy club.

**Disclaimer: Much of what you have read may not be 100% the literal truth.  So don't go forming a religion around it or start worshipping purple polka dot wearing janitors.  If you much form a religion, don't split into different sects and have religious wars arising from strict dogmas about what the janitors are doing on their day off.  What is true is that The Stand is in Newcastle, has comedy nearly every night, much of which is very funny, and that the food and drink in the restaurant upstairs is worth visiting for.  That bit is true.  Don't doubt it.  Even if you doubt the rest of it.

Blob thinks it could all be true though because why else would there be phrases like "laughed his head off"?  Blob isn't great with idiom.  He's not great with metaphor.  He is rather literal minded, which he puts down to being autistic rather that it just being one of those things.  He's probably right, because autistic people are often very literal.  Even Blob's person struggles with idiom and metaphor sometimes after decades of learning what they all mean.  She's quite good at inventing her own idioms and metaphors though.  Which is great.  Except that nobody knows what she's talking about.

Blob has stopped laughing his head off now.  His person has told him that the bump on her head had hurt quite a lot and it meant that she couldn't lie on her back without wincing visibly from the pain.  It had been a very big book and the librarian had hit her harder than necessary.  Blob says that it was entirely necessary because smaller books and gentler knocks hadn't woken her.  Blob's person is skeptical at this moment.

Blob's blog has gone a little astray today but he thought it important to talk about important things.  He is not surprised that people's heads don't often fall off in the street.  Many of them aren't smiling at all.  Many of them look as though they're not enjoying life at all.  Blob advises that if you're going to laugh so much that your head falls off you shouldn't do it at the top of a hill in the countryside.  If that happened it might take days or weeks for you to find your head again.  And what if it fell into the fast flowing river at the bottom of the hill and was swept out to sea and swallowed by a Leviathan and then vomited up again three days and three nights later in Nineveh, like Jonah's head was when it was still attached to his body?  What would you do then?  It would be terrible.  Blob Thing is glad that kind of thing could never happen to him.  People say to "hold onto your hats."  Blob advises holding onto your heads too.  Don't lose them.  And don't ever screw them on backwards.

Before discussing his adventures, Blob Thing would like to point out again that he has a sister and that he loves his sister.  She's called Winefride.  And she was named after a woman whose head actually did fall off and rolled down a hill.  Well it didn't quite fall off did it Blob?  It was chopped off by a nasty man called Caradoc who wanted to lie with her - as the Bible phrases it - and then got cross because she didn't want to lie with him.  Blob thinks that the Winefride in the story was sensible.  Even if she did lose her head for a while.  Maybe Saint Beuno, who put her head back on later, was actually a purple polka dot uniformed janitor.  Maybe.  It's not much more farfetched than the rest of the legend.

Today Blob Thing wants to talk about a visit to another library.  A very big library.  A library which looks very old but is much more modern than the Literary and Philosophical Library.  It's in Manchester.  Blob wants to talk about his visit to the John Rylands library and about all the interesting things he saw there.  Then he wants to talk about the rest of that day.  It was an extremely exciting day.  He saw Roman ruins, drove a tank [or so he claims] and even sat with the Blue Peter dog. [Blob's person can verify that claim.]

Blob wants to talk about that.  But he's not going to talk about it are you Blob?  Because you've already talked too much today.  It's time to stop.  Blob's person is going to allow him to share just one photograph from that thrill packed day.  Just one.  Choose carefully Blob Thing.  "Choose your next photograph carefully Mr. Blob.  It may be your last." [Slightly dented gold painted star for anyone who understands the last two sentences and knows who once said similar words.  Clue: His star would have been much nicer than the one Blob Thing is pretending to award.]

And here, after much deliberation, is the photograph Blob Thing has chosen of his trip to the John Rylands Library: 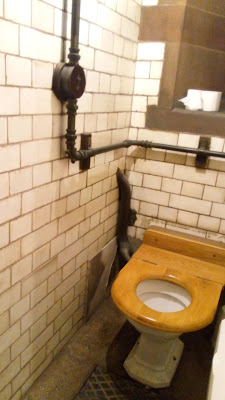 [Oh, Blob Thing.  Why did you have to choose that one?]  Blob Thing says it's because this photo was a result of his person's rebelliousness.  There was a specific sign saying that it was against the rules to photograph this toilet.  And she did it anyway.  Blob's person is a criminal.  Blob hopes that she doesn't get into too much trouble as a consequence of Blob Thing publishing her photograph.  [Okay, Blob.  Another photo.  This time use one that has you in it.  That's what people want.  A picture of you.]  Blob is sitting thinking.  There are several pictures to choose from.  He's looking at all of them very carefully.  Which one is best?  Which ones does he want to save for when he talks about the library?  He's choice is made.  At last.  This one: 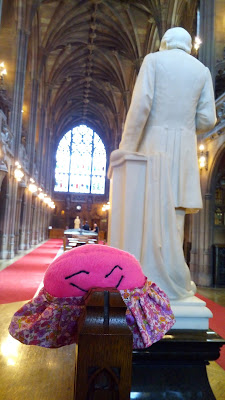 A good choice Blob.  Good choice.  You might even want to use that one again when you manage to write a post and focus on the subject at hand.  People do need to know about the janitors but they don't want to getting so off topic every day.  Blob Thing agrees.  Next time he will stick to the theme.  Maybe.