It's fair to say that Blob wasn't having the best of days.  He was in Fleetwood.  And that wasn't turning out to be the most exciting place for adventures.  Blob's person tried to tell him that adventures were possible even in Fleetwood.  She had lived within the boundary of the town for several years and had lived to tell the tale and even had a few adventures of her own while living there.  Blob finds that hard to believe.  No matter how much he is told of Fleetwood Market or Tram Sunday he can't quite believe that a town with a main street as dead at Fleetwood's was on a Saturday afternoon could be a lively place.  He's glad that he lives in Newcastle rather than Fleetwood.  Blob asks why Fleetwood isn't more like Southport.  That's not a wildly bustling metropolis but you can certainly get a wide range of ice cream there and Blob likes to relax by the sea there.  At least, he would enjoy relaxing by the sea if he ever visited when the sea wasn't out of sight from the shore.

Blob was just thinking that there couldn't possibly be any adventures to have in Fleetwood that day when his person and his creator discovered an adventure.  Just for him.

The adventure was this:

They would escape from Fleetwood.  On a ship!

Blob became very excited by this news.  He hadn't been able to tunnel his way out of Fleetwood.  But now he was presented with a different way out.  A ship!  He could hardly think about it for fear of being disappointed.  What if the ship wasn't there after all?  What if he remained marooned in Fleetwood for the rest of his life?  A life with no adventures was almost too painful to consider.  Fortunately, Blob didn't have to risk considering it for long because there before him was a sign.  And beyond the sign was the ship.  Salvation.   Blessed salvation from the dead streets of Fleetwood.  Blob spotted that there was even a tram stop named for the ship.  It was called "Fleetwood Ferry" but that's not what Blob's person kept calling it.  She seemed to think it was known as "The Knott End Ferry."

Blob began to dream about it and the journey they would undertake to the end of Knott.  Or to the place that was not the end.  Blob wanted to know what the place was not at the end of.  His person told him that that's not what the name meant.  He then kept asking what they would find at the end of Knott.  Would they find a pot of gold like at the end of the rainbow?  Or would they find something even better?  His person told him that that's not what the name meant either.  So Blob asked her what the name truly meant.  She had to confess that she didn't know.  It was the end of something.  Maybe the end of the land, since it was the point at which the land met the sea.  But she didn't have the faintest idea why it was called Knott.

Blob resolved to find out for himself.  But by the end of the day he was so tired that he quite forgot to find out and weeks after the adventure he can't be worried to find out.  He doesn't feel that researching the history and lore of Knott End would greatly benefit his life.  He considers that it wouldn't be much more exciting than what he discovered at Knott End.  And on a scale of one to ten excitements that had ranked somewhere towards one.  Maybe if he had more time to explore he would have discovered stunning adventures in Knott End.  Maybe.  Blob Thing confesses that he has some doubts about this.

Blob, his person, and his creator walked past the sign announcing the presence of the ship and they walked down a ramp.  They needed to pay a ferryman in order to proceed to wherever the ship would go.  Blob thinks it fortunate that the ferryman needed to be paid in cash rather than in the souls of dead ocelots.  If he had wanted to be paid in ocelot souls that would have proved more than problematic because Blob didn't know a single ocelot and even if he had known an entire circus troupe of ocelots their souls would be their own, rather than an acceptable currency for ferryman payments.  Blob doesn't ever want to steal the soul of an ocelot trapeze artist or hustle an ocelot clown in a game.  It wouldn't matter at all whether the game were pool or polo.  Hustling ocelot souls is just not cricket.

Blob was very excited.  His person was excited too.  And so was his creator.  They were going to escape from Fleetwood.  True, the walls weren't quite so high and thick as the walls of Castle Colditz or Monte Cristo and if there were any armed guards they were of the invisible or camouflaged variety.  But at moments that day escape had seemed impossible.   As the ship pulled away from the shore of Fleetwood, Blob and his creator posed together, blissful that they were actually doing this. 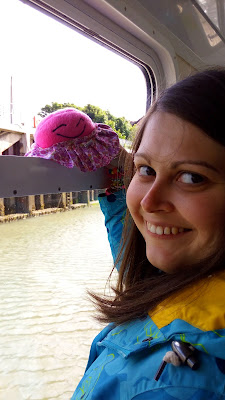 The ship crossed the choppy waters known as The Wyre Estuary and the three companions looked back on the town that had until recently been their prison.  It actually looked quite pretty from out on the water.  Blob could hardly believe the escape was proceeding so well.  He thought that at any moment sirens would sound and searchlights would shine out in all directions from the Pharos Lighthouse and the ship would have to return and Blob would be taken off and cast into a dark prison, guarded for all eternity by tormentors who would never be his allies no matter how much they sided with any fisherfolk in adjacent cells.  Yes.  The prison would be ruled by those fisherman's friends. 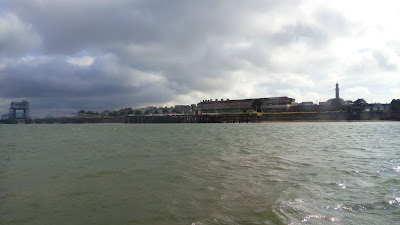 No sirens sounded.  No searchlights lit up the ship.  No helicopters armed with missiles appeared over the horizon.

They had done it.

Blob, his person, and his creator had actually done it. 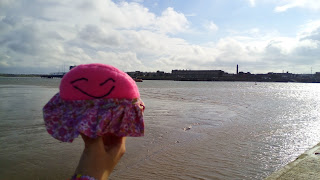 Blob stood on the shore of Knott End and smiled.  This could be the start of a new life.  He was filled with hope for his future.  Or at least for the rest of the day.

[Note:  Blob has since escaped from Fleetwood for much longer and he knows that going back there one day won't be the end of the world or even the end of the Knott.  You probably know that he has escaped properly because of everything he's said in his blog since the day he rode to (temporary) freedom on the Knott End Ferry.  Quite how he escaped, and why he had to return to Fleetwood at all, is a subject for another day.]