Blob Thing was feeling wonderful.  He had staged a successful escape from Fleetwood and was now totally free to live in the Republic of Knott End.  He says:

Oh yes.  That was a thrill.  My first attempt to escape Fleetwood had failed.  I'd tried to dig myself a tunnel from the beach but it would have taken a very long time.  I think my person and my creator would have got very bored sitting there waiting for me to finish.  It would have been a scary escape too because I don't think my tunnel would have been quite wide enough for my people.  I would have had to escape alone and then hope I could send back help later from the far side of the world.  They would have remained in Fleetwood with only the special eccles cakes from the Home Bakery to sustain them.

But my second escape attempt had worked.  I had managed to find a ship whose captain was willing to smuggle us out of the city.  It had been quite frightening arranging passage and trying to get to the ship without being apprehended.  But we had done it.  The voyage was quite thrilling and we were even allowed to look out of the windows.

Here we all were in Knott End.  Freedom at last.

I sat on the ground near the water and basked in the the atmosphere.  Don't you think that even the air smells different when you're free?  It's as if the world around you knows your freedom and adjusts accordingly.  Flowers smell better.  The birds sing better.  Apart from seagulls.  They weren't singing better that day.  The sun shines with a different shade of flame.  And the wind sings a happier song. 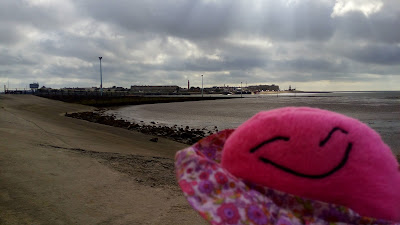 It was certainly windy that day.  Just look at my dress.  If it wasn't sown in place I could have lost it entirely.  And look at the way the sunlight is beaming in those clouds.  The sun knew.  The clouds knew.  Together they played and celebrated my freedom that day.

Knott End.  An entirely new world.  What would I find there?  The answer turned out to be this:  Not much at all.  Maybe if I had more time I'd find the adventures.  Maybe I could follow the footpath signs we saw.  Maybe I could meet the sorcerer.  Maybe I could have discovered the house of Kitty Wake and learned the secrets of alchemy.  Or discovered a lost and forgotten part of the kingdom in which soft toys are treated as equals.  All soft toys.  Harmonious together without any oppression from human beings.  Do you know that some of us are forced into unwanted hugs?  That some of us are just thrown away?  Some of us get ripped apart to make bedding for humans and some of us get burned or buried with all the rubbish.  It's not right.  Maybe in that part of Knott End I could find the place where soft toys can live free.  Maybe.  I don't believe I am going to be burned or ripped apart for bedding.  My person would never do that.  Winefride is safe too - even safer than I am because of her reins.  And all my friends here are safe.  They are all very fortunate to live in my house.

As I wandered round Knott End I made a friend.  Here he is. 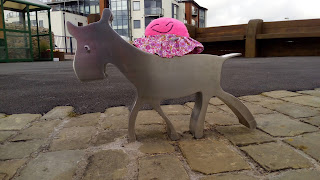 Yes.  He's a dog.  He was very sweet and stood totally still so I could climb onto his back.  It was quite difficult because of the wind.  I fell off several times before I could get my person to take a picture of us.  I enjoyed my new friend.  Until he revealed things to me that I could hardly bear to hear.

First he said that Knott End wasn't entirely a place of freedom.  It was a place where the justice system could be cruel.   He had been very hungry one day because his person had forgotten to feed him that morning.  All he did was steal one biscuit.  Just one.  And he left his paw print as a promise to pay the owner of the biscuit later.  The justice had been brutal.  It turned out that the reason he didn't move was because of the punishment.  He had been glued to the ground forever.   Even in the coldest winter and the fiercest storm he had to stand on the spot.  The dog hoped that one day there would be some reprieve, some mercy shown and that he could run around again.  If that happened he said he would leave Knott End as quickly as he could arrange it.  Possibly he would follow one of the footpaths and see whether a place like Lancaster or even Cleveleys would be a better place for a dog like him.

Sure enough.  The ship was approaching.  And I could see that the dog was entirely correct.  There was no point in fighting any longer.  I would return to Fleetwood.  I would experience that town and I would enjoy it.  I had to.   Sadly I walked down the slipway to the ship and surrendered myself to the care of the ship's captain.  He promised to take care of my throughout the voyage.  I could see that my person and my creator were already on the ship.  They looked a little sad but I told them to smile because they had a voyage to look forward to and even in Fleetwood they would have the illusion of freedom.

As the ship left Knott End we looked back to the land.  The place where we thought we would be free.  The place of dashed hope.  It was all very sad. 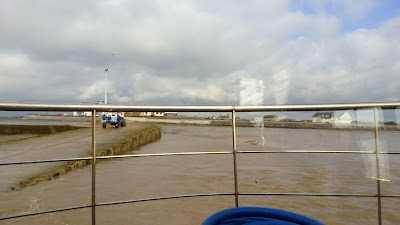 Now I am Blob Thing.  I have a certain personality.  And that means I can't be sad for long.  I much prefer to smile and find joyful things in life.  So I smiled through the voyage and looked at the sun on the water and looked out at the sea.  It was very beautiful.  There is always beauty somewhere if you can see the sky.  There is mostly beauty somewhere if you can't.

By the time we returned to Fleetwood I was feeling pretty happy inside.  If this was my future then this was my future.  I would live it.  I would like it as fully as it was possible to live it.  I would see the North Euston.  I would go to a show at the Marine Hall.   I would definitely feed the swans on the boating lake.  I might even get a job working for those fisherman's friends.  This was Fleetwood.  And I would live here.  Every other day I would walk and see the sea and I would watch the sunset as often as I could.  It would be okay.  It would.  Yes.  Fleetwood isn't Newcastle.  But I would prosper in it and encourage my person and my creator to do the same. 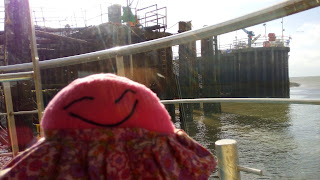 The ship pulled into the dock.  It hadn't been long ago that we had all walked down that ramp and onto the ship to stage our escape.  I asked the captain whether he would get into trouble for smuggling us all to Knott End.  He said we would be forgiven if he donated the fee we had paid to a local charity.

I was in Fleetwood again.  A new life was waiting for me.  If my person could survive living here for so many years then I could do it too. 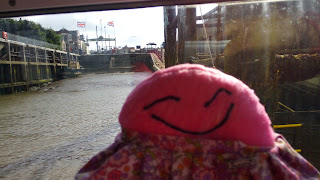 Look out Fleetwood.  Blob Thing is here.  Watch out.  Your life is about to get exciting!