Blob Thing Encounters An Evangelical Phone Box But Is Not Converted

Blob Thing's person is far too exhausted this evening to type a blog post for him.  She felt rough this morning but still went out and socialised with people.  She's glad she did it but is now shattered inside through making such an effort.  Visiting a graveyard on the way home helped her and she took some pretty pictures there.  But it wasn't enough to overcome the drain caused by the social.

Blob wants to share something today that's already been shared by his person on Facebook.  He says that his person should be able to cope with a post that just includes what's already been shared because she has already typed it.  Blob says that he hopes to be able to write a proper post of his own tomorrow.  He might not post about the Literary and Philosophical Library though unless he can remember the exact details of his adventure there.  He knows it involved a chasing game with a dragon and a puffin.  And he knows that the chief librarian told them all off and threatened to throw Blob Thing out of the library and forced the dragon and the puffin to get back onto the covers of the children's books they had escaped from.  But Blob is a bit hazy on the details right now so he might write about something else - another adventure involving a chase, and one which he had with Winefride.  That was a very exciting time.  But it was just a little bit more than scary for a while because Winefride was worried that they would be sent to prison!

Today Blob thing says that he wants to reproduce this: 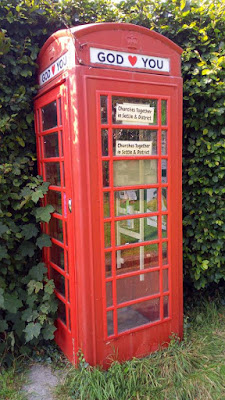 This is the evangelical phone box of Settle.

Blob's person photographed while at ‪Autscape‬.  On that day she had gone walking with Blob's creator and they had taken Blob and Winefride along with them.  On that day they all ate ice cream, played by the river, and went to a play area.  It was lovely.  On the walk back from Settle to Giggleswick they saw the evangelical phone box and because Blob's person is still a bit obsessive about the God she doesn't believe in any more and the faith she no longer practices they all had to go and look at it.

Inside the box were some leaflets about God and Jesus and church things, and a walking guide to the area in which you stopped off at various important spots and at every single church.  At every stop there was a little prayer. 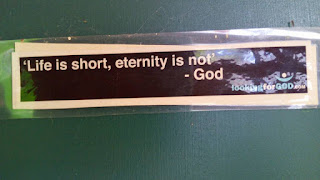 
You may wonder about the veracity of that quote because it isn't in the Bible or in any other of the main books that God is alleged to have written.

But Blob's person - with a bit of help from Blob - has been looking carefully into events and can report that it is not invented.

The evangelical phone box got the direct quote from God after he won an amazing treble, scooping the 50p first prize at each of fudge making, the large vegetable competition, and the adult sack race. That was at a local festival in 2011.

Afterwards God said to the phone box in an interview for the BBC (filmed but never broadcast) that he was very proud of his achievement and would treasure his winner's cards for "a very long time because although life is short, eternity is not."

The interview was later printed in a local paper and God is pictured with his cards. Next to him is a local dignitary who is holding up God's enormous cucumber above his head.

God has since sold his house in ‪#‎Settle‬ and moved north to Dentdale. He wanted to downsize and live somewhere quieter. He hasn't bothered pinning up his cards in the new house. They're in a box up in his attic. Forgotten.

It is good to know the truth about these things. Otherwise people might continue to doubt that God ever said these words in Settle. 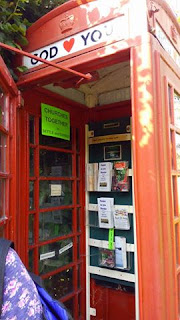 There's that phone box again - an inside view.  In the corner of the picture you can see a little piece of Blob's creator.  He hastens to say that all the other pieces of his creator were safely attached to that piece.  The evangelical phone box had not cut her into pieces.  So don't worry!

Blob would say that whenever we express true love, we express that which we may call god.

And thus the god of love, love itself, is found within and without, in the depths of our beautiful hearts and in the awesome wonder of the world around us.

Blob would say that god is love.  He would also say that god is not just love.  In the grandeur of the mountain there is no love expressed.  And yet god is there too.  God meets god when we express love and adoration for that grandeur.

That's what Blob says.  And because he says all that, it's possible that he doesn't quite believe all that he and his person wrote on Facebook about that direct quotation in the evangelical phone box - any more than they believed the can of Irn-Bru they saw today that claims it's "been bru'd to a secret recipe since 1901" and yet contains such wonderments as Ponceau 4R, a synthetic colouring that is banned in the USA, and Sunset Yellow.  [Also note that it says bru'd.  The drink was once called Iron Brew.  But they had to stop calling it Brew because it's not brewed.

The Food Standards Agency asked food manufacturers in 2008 to voluntarily remove additives such as these from foods.  But they're still in Irn-Bru.  The manufacturer agreed to remove them.  But that was in January 2010 and they haven't done it.  Naughty manufacturer.  This does not stop Blob's person from drinking the stuff every now and again.  It may have all kinds of crap in it.  It may contain 32 flavouring agents and Blob would suspect that not all of them were in the 1901 recipe.

Blob's person has learned while reading about the 32 flavouring agents about the transphobic advertising campaign that ran for Irn-Bru.  Maybe it's time to stop drinking such utter crud.  Blob is instructing his person:  Never drink Irn-Bru again.  Blob thing points out too that the only iron in irn-bru (which was advertised as "made from girders") is in the form of a 0.002% addition of ammonium ferric citrate which isn't usually what girders are made from.  Blob is doing his very best to convince his person not to drink the stuff again.  She's complaining because it is tasty and she likes it.  But Blob is adamant.  Adamant.  This argument will run well past a blog post.

Blob wishes to apologise that his deep thinking about spirituality suddenly turned to talking about a soft drink.  Blob Thing has never drunk Irn-Bru.  He never will.  He doesn't like the colour.  Tea has good colours.  Hot chocolate has wonderful colours.  But he doesn't like the way Irn-Bru doesn't just look like rusty iron, it looks like luminous rusty iron.

Blob doesn't think the saying "God is luminous rusty iron" is quite as catchy as "God is love."

He's going to stick with "God is love."