Blob Thing And Winefride Go Riding On Some Welsh Sheep


We're not going to write much today.  We know we say that almost every day.  But this day it's true.  At least, we think it's true.  We're very tired and we want to go out so we neither have the brain power nor the time to write as much as Blob Thing usually seems to write or say.

Today Blob Thing wants to think back to Winefride's first day out.  It was only a week ago.  We're writing this in the morning so can say that a week ago Winefride had never been outside.  She was looking forward to it we think, although she didn't know quite what "outside" meant and can't have had any idea of the varieties of things out there.  Winefride has been doing marvellously in the last week.  She's been out again - enjoying the view from a coach, dancing in a cafe, eating apple pie and custard in another, and she and Blob had a good time by the seaside too.

But this was Winefride's very first trip outside.  And it was a big one.  She was going to go to a different country.  A place where the words are all different.  A place where even Blob doesn't understand the road signs.

The trip was to Wales.

Blob Thing was extremely excited.  He had never visited another country either.  And this was his first time being out with his sister and that couldn't have been a more special feeling.  What would they see?

During the day they visited two places.  Rhiwabon and Wrecsam.  Those places are also known as Ruabon and Wrexham.  Rhiwabon was very small.  Blob had wanted to eat lunch there in a cafe but there was only one cafe in the entire town and that had shut at noon.  Obviously there isn't a lot of demand for lunch in Rhiwabon.  Perhaps it's a missing meal and everyone just jumps from breakfast to dinner.  Why else would the only cafe in a town shut before lunchtime?  Fortunately everyone was able to buy a little bit of food otherwise they would have felt very hungry.

The most exciting thing in Rhiwabon was that Blob's creator found a little footpath and at the end of that footpath was a play area.  It had swings and lots of other play equipment.  And it was deserted.  Nobody there at all.  The very first picture of Winefride enjoying the world was taken there.  Blob shared it with you a few days ago.  But he likes it so much that he wants to share it again. 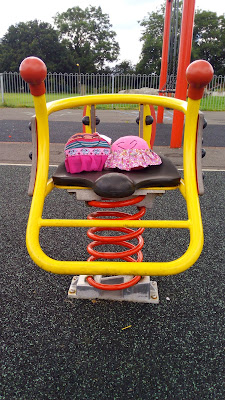 She's so amazing.  Her first day out and he just got on and did everything and smiled at it all and managed not to get too overwhelmed at the sudden rush of experiences.

Blob's creator and his person liked the play area too.  Blob's person had ten goes on the zip wire, having been a little afraid of it to begin with.  And they both really enjoyed lying down in a little bucket roundabout and being pushed round and round and round.  It was a wonderful feeling.  Everyone enjoyed the swings of course.  And they went on nearly everything.

After visiting Rhiwabon, Blob said that they should go to Wrecsam and have a look round.  On the way, his person was distracted by the local church and dragged everyone in and she was suitably impressed by all the stained glass and statues.  She would have preferred just to be able to look at things rather than having someone there try to tell her all about the history of everything.  She's sure that all of that is very interesting but she doesn't cope well with enthusiastic people telling her about everything in a church building.  They give her a maze of names and dates and so on and she tries for a while but nothing gets retained and in the end they might just as well be telling her a list of random words for all the difference it makes.  She was told about statues and windows and tombs and carvings and the font but all she can tell you about them now is that they were statues and windows and tombs and carvings and a font.  Some were old.  Some were pretty.  And some were connected with some rich family or other.  Blob's person isn't good at taking in verbal information.

So the four travellers went to Wrecsam.  Blob's person dragged everyone into another church.  Blob wants to know why she keeps insisting on going into churches.  Sometimes it can be fun.  He's visited several churches in Newcastle.  He made some friends in Jesmond and some more in the cathedral and he's done some bell ringing too.  But sometimes he confesses he finds it a bit boring.  What's he meant to do in a church?  It's not as if any kind of god exists in a church more than they would outside of it.  Blob is very tempted at this moment to start talking about god and God and all his theories about it.  People go to a church building to pray to some God or other.  But even in the teachings of those religions that God is everywhere and isn't any closer in a special building.  So why not pray wherever the person is?

Blob's person tells him now that for some religions, even though they teach that God is everywhere, God is somehow closer in a special building.  For a Sikh, the special building is the Guru's house.  So it's special.  For a Catholic, the special building is where Jesus lives, locked away in a metal box and hidden behind a curtain most of the time.  Because obviously that's how Jesus would want to live.  Catholics are funny about their quest to protect Jesus - who they believe exists in a form where he looks, smells and tastes like some wheat wafers but is actually fully Jesus and alive.  For a Catholic, the risen Jesus is closest to them when he's being a wafer and that wafer is the most special thing on earth and needs to be kept away from anyone who isn't a Catholic.  They have lots of rules and beliefs about that and Blob's person used to believe them all very strongly and that wafer was extremely important to her.  To Blob's person that wafer was Jesus, his body, blood, soul and divinity.  Substantially present.  Sacramentally present under the form of bread.  Blob's person used to believe all that.  Now she doesn't.

Blob says that his person should shut up about Catholicism now and about her past when she was so devout and when every line of liturgy gave her something.  Blob wants to move on to talk about what he wanted to talk about today.  Himself, Winefride, and sheep.  Yes, that church in Wrecsam might have been important once to Blob's person.  But that was a long time ago and the sheep experience was only last week.  Blob's person's faith is gone.  It's a very different faith now.  But the sheep experience was only a week ago.  And Blob is here.  Now.  And Winefride is here now.  And so Blob's person should type about them not about herself.  If she wants to type about her religious history she's got a blog of her own for that or she could just write a book.  People say that a book about her life would be very interesting but she always says that she doesn't agree and that it would be pretty dull.

Oh dear.  Blob's person says that it's time to stop writing.  They need to get ready to go out for the day.  Because she's talked so much about her own life, Blob hasn't got time to talk about his own.

Please don't sulk Blob Thing.  You've got a day out to look forward to.  And I'm very sorry about it but you seemed to be enjoying the discussion we were having about the churches.  And visiting that church in Wrecsam was really very weird for me.  I promise that tomorrow we can just talk about Winefride and you and the sheep.  I promise.  At least, we'll try to stick to topic.

To close.  Just one of the six photos that Blob had planned to share.  Here he is with Winefride and a sheep outside a church in Wrecsam.  It's not the best of the six photos.  There are better.  And Blob will share them tomorrow.  Just look at Winefride.  She's ever so brave to do so much on her first day out.  Blob Thing is very proud of her. 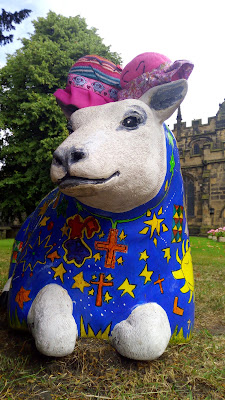