Blob Thing was feeling a lot happier than he had been before lunch.  The peace of the hill, the joy of rolling down the hill, and the finding of a mysterious path by the tumbling water had quite resolved all of his earlier anxieties about prisons and noise.

By the time he walked up into the gardens of Hexagon House and saw Hexagon Abbey displayed in front of him Blob was back to his happy self and believed that this day would become one he would treasure.

Blob and his person turned a corner and came across this sign. 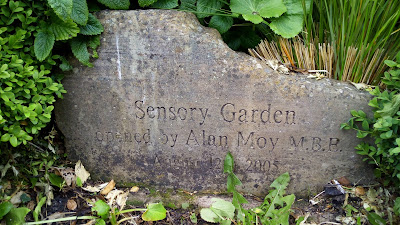 A sensory garden.  Blob can't even begin to tell you how excited he was.  He had heard all about sensory gardens but he had never seen one.  Being autistic he was thrilled to find one and wondered how amazing it might be.

He stopped for a moment to give thanks to Alan Moy M.B.E. for opening the garden so many years before Blob Thing was even born, Alan Moy who could not possibly have foreseen that Blob would one day come to visit his garden.  Alan Moy, Blob Thing salutes you.  At least, he salutes you in his mind.  Saluting you physically would involve some physical movements impossible for one so amazing but so limb-free as Blob.

Alan, you may be "an ordinary man" as you put it yourself, but Blob Thing thinks the garden is great.  For all the work that you did in your career working as a gardener in Hexagon, we thank you.  Whether you are being called Percy the Gardener, or Parkie, or just Alan, we thank you for work that must have brought thousands of smiles to thousands of people through many years.   You made people happier and gave them somewhere good to be.  And for that you deserve your M.B.E. just as much as anyone else.

Alan, you left school without a qualification, without some piece of paper to show the world and claim merit because you happened to have passed an examination.  Your life has been worth far more than examinations and certificates.  Compared to a life devoted to helping create the places you helped to create they are nothing.  Compared to the achievement of improving the lives of the many they are worthless.  People may say you were just a gardener.  People may grade careers and say one is better than another and one has more status or should be given more respect than another.  Blob Thing would place your career, if he was forced to put them all in order, high up in the list.

You planted life.  You nurtured that life.  And in doing so you gave some life to every person who passed by.

Alan Moy, M.B.E., at that moment of seeing the sign you were Blob Thing's most favourite person in the entire world.

Blob and his person walked into the garden.  There were such a lot of different kinds of plants and every one of them seemed to have a different shape and a different texture.  Some were tall and long, others short and stumpy.  Some were rounded, others jagged.  And among the soft leaves of many shapes there were some that looked very hard and spiky. 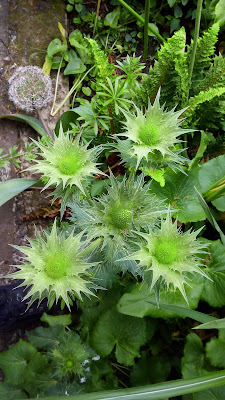 Blob Thing wanted to look at every single plant in the garden.  Twice.  And he wanted to touch them too. To rub himself against them and feel them against his face.  He wanted to smell them and appreciate the different scents of the leaves and of the few flowers that happened to be in bloom that day.

Blob sat down among the leaves, his weight supported by them. 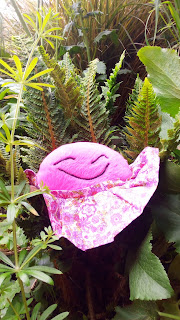 He let himself fall inwards and fall outwards into a sharing of himself with them.

He knew a truth beyond telling.

Every plant a world of its own.

Every leaf, every petal, every stem almost the size of a universe.

When something so tiny becomes the fullness of our awareness then just for a moment we and it become the entirety of existence.  All else fades away into nothingness, into an imagined past and future, as if it was never there at all.

Blob, seated in tranquility, let the world go and slowly that which was real reduced in size until it was only him and the plants.

And the air too, slowly blowing across both Blob and leaves, bringing oxygenated life to all that remained and taking away all stagnation, all the waste of the lungs of Blob and plant, all the thundering darkness and unstoppable, chaotic noise that keeps rising within the minds and hearts of us all.

There was Blob.  There were plants.  There was air.

And that was all.

In a moment stretching to infinity, beyond past and future, beyond all dimensions.

In a moment stretching in to the steady core of Being, the heartbeat of the blissful truth.

In an intimacy beyond knowledge, in the unity between the three.

Three separatenesses apprehended as the oneness they possessed already in the stream of time and change. 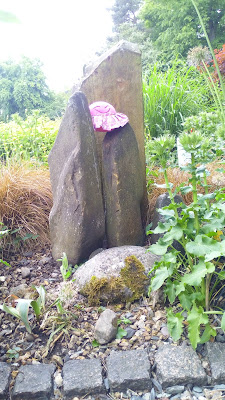 At this point Blob's person wants to say something.  She wants to say that she truly admires Blob Thing and the way he enters into experiences such as these.  She can't do it herself.  And saying that, she realises that she is limiting herself just as nearly all of us limit ourselves.  Blob Thing says that she can do it.  Or more to the point, she can't do it!  Because there is no doing involved at all.  Instead there is a lack of doing.  It's all about being.  It's about letting one's self drop away so that one can be one's Self and then just Be in that truth where Self is one, and all is One, where language fails to express what Is.

Blob's person doesn't really understand what Blob is talking about.  Blob Thing seems to know though.  He has "been there."  Blob says that we are all there already and need to learn to be where we already are, that it's not a matter of going somewhere else - unless you find something in that somewhere else place that helps you discover where you already were in the first place.

Blob's person is getting confused.  She wants to move on and talk about something else at this point.  Much as she admires Blob's almost instinctive, beautiful mysticism, she wants him to stop talking about it.  Blob says that we all have instinctive, beautiful mysticism.  We just forget it exists and then fail to believe that it ever could have been there within us all the time.  He is laughing so much about it at the moment.

His person's face isn't a beautiful picture of mysticism.

It's a beautiful picture of puzzlement.

Blob Thing has decided to leave his Blog there for today.  He's written enough for one day and given his person lots to think about.  He thinks that she should spend some time considering all the things he has said about his experience.

Blob says that doesn't apply just to his person.  It applies to everyone.

Whoever you are reading what he has been saying.

Be a spring of living water rising up and becoming a mighty river.

It is your birthright.  It is your own innate beauty. 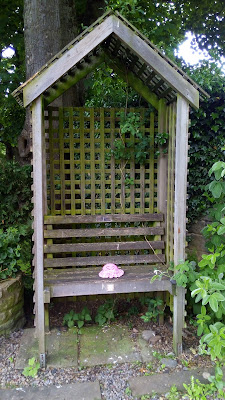 Blob Thing really is stopping now.  He just wants to share a few more pictures of him enjoying the sensory garden.  After his perfect moment (during which Blob's person confesses she was standing around getting a bit bored and unappreciative of his silence) Blob walked round the rest of the garden.  He sat on a bench and smiled because he couldn't have been more content at that moment.

He played in the leaves of some more plants. 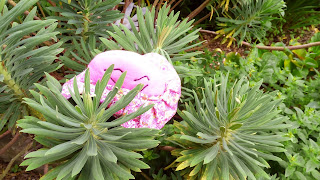 And then, just for fun, he sat himself down on some of the spiky plants.  He burst out laughing and almost fell of the plants.  The feeling of the spikes pricking his bottom was just too funny for words.

Blob really likes the picture of him sitting on the spiky plants and laughing.  He especially likes that way the grass plant curves so perfectly round him.  If Blob Thing had his own Facebook account he would perhaps choose to crop this photo and use it as his profile picture.  It would make him laugh every time he saw it. 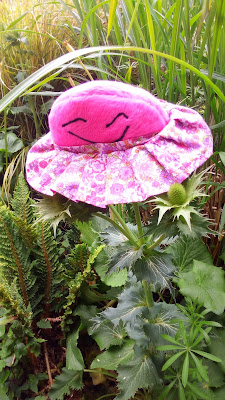 It was time to leave the garden.  The day wasn't over yet.  Because there, in the distance, just where it had been before Blob first read Alan Moy's sign, was Hexagon Abbey.  Yes, Hexagon Abbey.  Blob could hardly wait to see what mysteries lay within.

Alan Moy would be in his early seventies now.  We hope he's living long, enjoying his retirement and will have many years of smiles of his own.  If anyone reading this happens to know him - which we know is unlikely - let him know that we appreciate him.