Blob Thing Reveals That He Is Autistic and Proud


This is a difficult post for Blob Thing to have typed for him.  He's been wanting to write about it for a while and still doesn't know what he wants to say but he wants to reveal something about himself.  It's not something that is bad or a cause to feel shame.  However, it's something that makes people look at you slightly differently.

He's not formally diagnosed as autistic.  That won't ever happen.

It's hard enough getting a diagnostic assessment for a human being.  Sometimes it can take years and a lot of fighting before someone manages to be assessed.  Parents can be given a thousand hoops to jump through before anyone will agree to assess their child.  It really is very difficult.  Adults wanting to be assessed may be lucky and be referred quickly and then join a waiting list to be seen or they may face a similarly tough battle before anyone even considered referral.

That's the situation for a human being in this country.  The situation for Blob Thing is somewhat different as there are no diagnostic services available for small, pink, hand made soft toys.  So Blob can never be formally diagnosed.  Ever.  He knows that will present an issue for some people.  They will not be able to believe he is autistic because he hasn't got the right piece of paper to prove his credentials.  Some of them won't believe he's autistic on the grounds that they believe friends such as him can't be autistic because he's not human.  Some won't believe because he doesn't act quite like some autistic person they knew or quite like a stereotype.

Nevertheless, Blob Thing is autistic.  He knows it.  His person and his creator both know it - and they have some personal experience in the matter.

The trouble is that, though he wants to talk about being autistic he doesn't quite know what to say about it.  He is autistic, and that's enough for him.  And so he wears a badge made for his person by his creator.  And his person wears a necklace made by his creator. 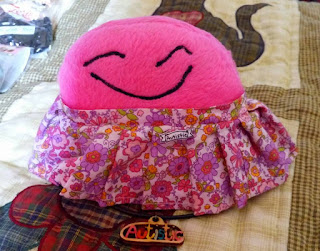 Blob is autistic.  And he is not ashamed.  In fact he is proud.  Because autism makes life much more difficult.  He has heard that an autistic person has to work five times harder just to get through a day.  Every day.  Blob is proud of himself because he does it.  He's proud of his person because she does it too and didn't even know why it was so hard for most of her life that's gone.

Yes, Blob is proud.  He is autistic and proud.  Next month he is even going to a conference run by and for autistic people.  He is looking forward to it so much.

Blob Thing won't be writing much about being autistic.  Plenty of other people have done that.  He just wants to keep writing about his adventures.  He has ever such a lot to tell you about.  Yesterday he went out yet again and visited gardens, climbed lots of steep steps up to a hill that once had a castle and he showed exemplary bravery in his use of stepping stones.  Stepping stones are difficult for a blob that can't actually step. 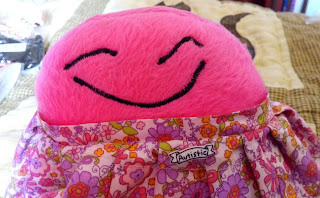 Yes.  He's autistic.  That affects his life every day.

But more important to Blob is his adventuring, the seeking of new experiences, the embracing of everything that life can be.  Blob is filled with wonder and sees a world worth smiling about.  So tomorrow he will be telling you again of an adventure.  He might mention autism again sometimes.  When it affects him or when it affects his person more greatly than usual.  Autism is important.  But it's not the fullness of life.