A quick post today.  Blob is exhausted after his holiday in Manchester and his person is exhausted too.  So he doesn't want to talk much and she doesn't want to type much.  Tomorrow, if he has the time, he wants to write about the very special thing that happened while he was away.  It's something that he hadn't expected at all and he's very happy about it.  Blob Thing is also very happy that he had his dress fixed so it won't keep falling off.  He feels a lot more stylish now.

Today Blob quickly wants to share some photos that were taken on a visit to a cafe in Newcastle.  This is Super Natural, which has recently opened on Grainger Street, having moved from a quieter location.

Blob's person had been having an awful time in town a couple of weeks previously and had failed to get into the cafe, instead shutting down almost totally in the street outside and only just and only eventually managing to get herself the twenty metres to the bus stop to wait for a bus to get her home.  She wanted to try again.  She wasn't going to be defeated by terrible head days.  Blob applauds her determination.

They went back to the cafe together on a day on which she was feeling a lot better.  It was ever so comfortable inside and they were able to share a lovely sofa.  They ordered themselves a drink and decided that it was a good place to be.  The man behind the counter even turned the music down for the two friends, which they much appreciated.  Blob's person has been learning from Blob's creator that asking for music to be turned down is allowed.

Much exhaustion.  Much.  So here are a few photos.  And not much more.  Blob's Person thinks that after yesterday's long ramble from Blob anyone would be very grateful for brevity.

Here's Blob posing, with the opposite wall in the background.  All the cards under the clock were hand made and were being sold in aid of two animal charities.  Not only that, all profits from the cafe go to the charities too.  Blob is glad.  Nobody is there to get rich but any spare money from his drink might help to make a cat happy. 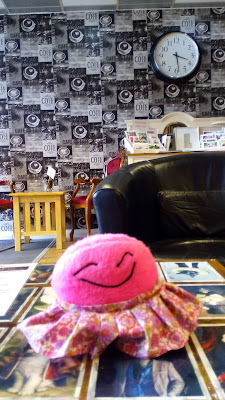 Here's Blob posing on the arm of the chair with the length of the cafe and the counter behind him.  He thought it was great.  The ceiling left something to be desired but he knows it would have cost so much money for the cafe people to make a new ceiling that they wouldn't have made any money to feed the cats. 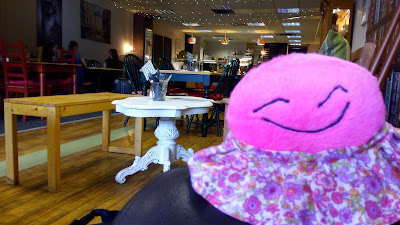 Here's Blob Thing posing.  Again.  He likes posing.  And, you must admit, he does it so well.  Isn't the table wonderful too? 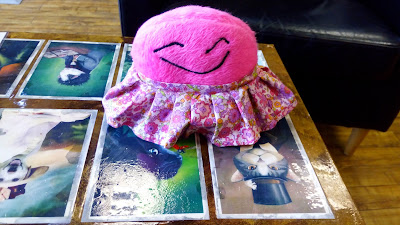 And here is the view from that comfy sofa out of the window.  When he entered, the chairs were occupied by some people having a discussion group.  He thinks they were philosophers of some kind.  One of them had a book that looked very interesting but Blob wasn't quite interested enough to note down the title. 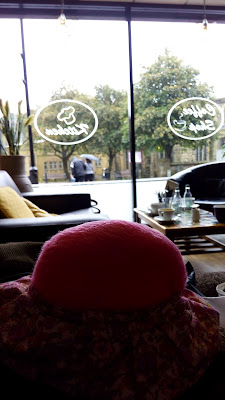 Beyond the window you can see part of the Anglican Church of Saint John the Baptist.  One random piece of information Blob knows about that church from his reading about Newcastle is that it contains the oldest known depiction of the three castle symbol of the city.  Sometime he wants to have a good look round.  Last week he was touring another church in the city and he's still a bit excited by his memory of ringing the bells.

One final picture.  Here is Blob's person in Super Natural, sitting with Blob.  The book she's failing to read due to Blob having sat on top of it is On The Edge of Gone, a young adult book about the aftermath of a meteor hitting the world.  The main character is autistic, as it the author.  Blob was glad that an autistic person was writing the autistic character.  It meant that the depiction was realistic and that autism became part of the make up of that character rather than the character becoming just a set of stereotypes - like in a certain very popular novel that Blob couldn't finish because every chapter seemed to be about a different stereotype and not about a person at all. 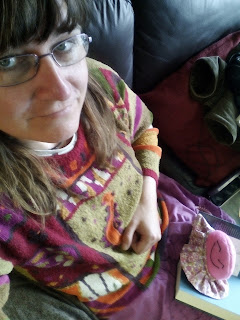 Blob and his person have returned to the cafe.  He'll tell you about that visit sometime.  On that day they shared a healthy lunch, chatted with a philosopher, and then later accidentally stayed on for tea and cake with some unexpected people.

So that's it.  A short post.  Blob can head off to his bed now.  He's looking forward to it.