This morning Blob has woken up feeling very tired.  Yesterday was exhausting for him.  He took part in the Northern Pride parade, went to the Alt-Pride picnic, and then his person made him walk round the stalls of the official Pride event.  He enjoyed the parade a lot even though it's noisy and crowded.  The picnic was hard because neither he nor his person are very good at group social situations.  But the people sitting there enjoying each other and enjoying the sunshine were obviously a good crowd.  The official event was mainly a horrible experience, only in part because Blob and his person both have quite big sensory difficulties due to being autistic.  Every moment of Pride is difficult - it is a form of sensory hell, a torture at every moment.  Some people love it.  They rave about how good it all is.  Blob Thing found it very hard indeed.

But Blob chose to be there.  To support his person.  To have a new experience.  And to stand up for things he believes in:  Inclusion.  Acceptance.  Equality.  Justice.  The dignity of people no matter their gender or sexuality.  The truth that monogamy is not the only acceptable form of relationship. 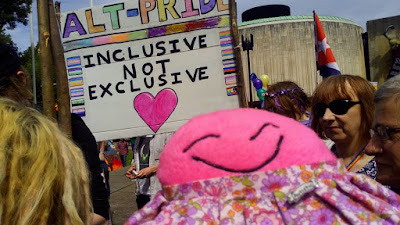 Perhaps there's not a lot that can be done about the constant sensory hell that autistic people face at Pride.  Perhaps there is - Northern Pride could introduce a tent at the edge of the event.  A quiet zone.  A place for people to be still.  Blob is going to a festival next month and yesterday he learned that at that festival there is a place known as the haven where everything is quiet and relaxing things happen.  Blob's person was talking with someone who volunteers there and works with accessibility issues so that everyone can enjoy the festival and their different needs arising from disabilities or health problems are catered for as much as is possible.  Yes, that festival - Greenbelt - sounds much more inclusive than Northern Pride.

The first horrible thing was on the way in when Blob's person had an argument with the security guard who tried to throw her empty water bottle into a bin.  Blob has since heard of a much worse argument someone had when entering Pride.  Blob won't talk about that for legal reasons but will say that it sounds like it was a horrible experience for the person concerned.

Blob's person asked whether her bottle was going to be recycled and the security guard couldn't say yes.  She argued with the guard because she likes recycling bottles.  Even more than that she likes, if possible, to reuse water bottles - hers had been filled with tap water at the start of the day.  That seems sensible.  It saves money.  And it's one tiny part of everything that will need to happen if they human race isn't to doom itself.  Blob's person has asked Northern Pride to confirm whether the so-called rubbish is recycled.  Publicly posted on the official Facebook page she wrote:

The security guards yesterday were confiscating water bottles from people and throwing them away - including from people who were wanting to use that water to take essential medication and from poor people who can afford tap water but not to pay expensive prices for it. My question though is not about the very dubious ethics of that. I would like to know what happens to all the plastic bottles that were being thrown in the bins at the entrances by security. Are those bottles being recycled? Please could you confirm whether Northern Pride is environmentally aware enough that rubbish is sorted and recycled. The guard couldn't tell me so I refused to let them throw my bottle away. Yes, I kept my bottle. Which I think is right. And guess what? Northern Pride did not fall apart by my having a little of my tap water. My bottle will be reused thank you, not wasted.

Of course, confiscating people's drinks is morally very dubious.  Some families bring a picnic.  They want to eat it while sitting by the stage being entertained.  The security guards confiscate their picnics.  Some people have special diets and need to bring food to support those diets.  The security guards confiscate their food, thus endangering their health.  Some people are very short of money.  They can afford to bring their own sandwich but can't afford to pay a fiver for a small fajita and a few Pounds for a bottle of water.

Blob Thing is disgusted by the policy Northern Pride introduced a couple of years ago that nobody would be allowed to take any food or drink into the event.  He is disgusted.  There are other things too about Northern Pride that he doesn't like at all.  Maybe he will talk of them one day when he posts about the adventures he had there.  Yes, this isn't Blob's post about Northern Pride.  He was meant to be starting to tell of the adventures he had in a place called Hexagon, of how he found himself imprisoned there.  But he got carried away with talking about water bottles so Hexagon will have to wait a day.

Blob's person didn't enjoy being inside Northern Pride.  For her own reasons.  But she was pleased she went in.  She talked with nice people from the church she used to be a part of - Northern Lights Metropolitan Community Church.  She's not part of the church.  She hasn't got a personal God to pray to.  But she still loves the church of which she was a member.  And Blob's person met a couple of people who were surprises and she was really pleased about that.  One was someone she met at Autscape, the other was a very nice political activist and music lover.  Meeting them was great.  It was also very good to see people from the Sunday Assembly.  Blob's person goes to their events and posts nearly every day in a Sunday Assembly group. 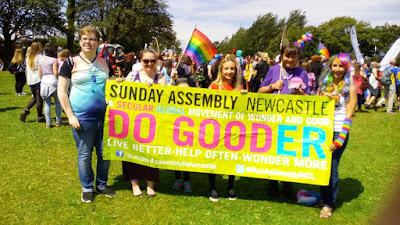 At some point Blob will write a proper post about his experiences at Pride.  He has other pictures to share and may have much to say when it's all sunk in a little more.  Blob Thing is very glad he went to Pride.  He's glad that he has some new notebooks picked up for free from stalls.  He's glad that he was among such good people.  If he can, he'll go again next year.  Tonight he'll be back at Pride too - for the event is not over.

Tonight there is a Pride vigil service led by the Northern Lights church.  It is always an excellent service and is very moving.  It's the one time in Northern Pride when people remember those who have been killed, been hurt, been driven to take their own lives.  It's the one time for remembering the suffering many people there have endured, for remembering that there is still much work to do before we achieve those values Blob Thing believes in.  It's true that the service is led by a church.  But it's not about any particular God or even any God at all.  It's about life.  It's about beauty.  It's about sadness.  It's about love.  And Blob wants to be there and share in all that.

[1212 words.  If this were Countdown that number would be called a Whitehall.]
Posted by Clare Matthews at 09:33