Blob Thing enjoys going out to places.  Readers of his blog have probably worked that out by now.  Whenever his person leaves the house on an adventure he asks to come too.  He is eager to leave the house and be somewhere different.  His person is getting better at remembering Blob.  Quite often she is the one asking him whether he wants to come out with her.  She probably knows that his answer will be yes but it's polite to ask.  Blob is pleased.  He has a lust for adventuring, a fiery desire to explore the world around him and to experience as much as a small pink toy ever could.  Blob wants to live the fullest life possible.

Yes, Blob loves the places he visits.  He even loves the places he visits and doesn't particularly enjoy.  Those too are part of his experiencing and his learning about the world and about himself.  It's true that there are experiences he would rather not repeat.  It's true that there are places he would rather not have to endure over and over again.  Blob doesn't ask to accompany his person to supermarkets.  They're not his favourite places.  He would prefer to leave shopping trips to his person while he stays at home with his friends.  Having a chat with Stillness, Adunno, or even with Got A Warthog is a much preferred use of time for Blob.  He loves his friends and one day soon will introduce some of them to you.

It's not just the visiting that Blob likes.  He also enjoys the journeying.  Perhaps when he is much older and has travelled on buses and trains many, many times over several years he will have grown tired of them.  Perhaps there is still some novelty value for him in travel.  After all, he's only six months old and everything is still a new experience.  There's every chance that Blob will get bored of travel and sit through journeys wishing they were over.  But maybe that sentence is just Blob's person being cynical.

Perhaps not though, perhaps he will never take the journeying for granted.  Perhaps he will always find something of interest or excitement in his journeys.  There is a lot to look at among the people and places he passes.  There is always beauty to be found somewhere.  In a person's face.  In animals.  In trees.  In the sunshine or the rain or the near infinite variety of clouds.  In architecture.  In fields.  In the surprises that sometimes happen and the knowledge that a new surprise could happen at any time.

Sometimes Blob enjoys the company of his person when travelling.  Sometimes she is not good company at all because she is sitting with noise cancelling headphones in order to make the journey easier for her brain.  If Blob were honest, he would quite like to have a pair of headphones of his own because he sometimes finds the noise of the world terribly difficult to cope with.  Autism is very hard work.  When Blob's person is having to retreat inside herself Blob watches the world.  And he retreats inside himself too and thinks about his life or falls into silence or the quiet of a meditation time.

In the words of Jesus, he goes into his room and closes the door.  There he can spend time alone with the alone and with the infinite company of the universe, of the wildness of Spirit.  Jesus never meant people should go to their physical room and close the door to be alone with Spirit.  Most of the people he talked with didn't have a room of their own to go to.  So why would he have meant that.  Of course he didn't.  Blob has a talent for going into the room Jesus was talking about.  That room is tiny, because it is within Blob's small being.  That room is infinite, because it is at its very centre, in unity at oneness with all that was, all that is, and all that is to come.

Blob enjoys spending time in his tiny, infinite room.  He would recommend to anyone that they discover their own room and close the door.  He recommends it to his person too.  She has never allowed herself enough time and space to discover and dwell in her own room even though she knows it would be a good thing for her to do.  She dwells outside of her room and often in places that bring no contentment.  Perhaps the journey inwards would be the very best journey for her to take.  Blob Thing says to her, "Go to your room!"

Blob likes journeys.  On one trip out recently he had a very special journey.  Blob and his person often travel on the Tyne and Wear Metro.  It's only natural as they live just a few minute's walk from a Metro station.  Blob quite likes the trains.  Some of them have advertising over the windows and that's less interesting for him but most of them have windows he can look out of.  On this particular day Blob and his person were very fortunate:  They were able to sit in the front seat.  The front seat is the favourite of many passengers because from it you can see the view out of the front of the train, the same view the driver has.  It's very exciting.  Blob was ecstatic about it because he had never sat at the front before.  He had always wanted this to happen.  He let out a cry of joy and his happy flappiness was evident to everyone in the carriage.  Possibly.

During the journey, Blob's person took some photos of him.  These first two pictures were taken at Newcastle Central Station.  It is usually prettier than this but it is currently being modernised.  Blob's person hopes that the art work that was on the station platform will still be in place after all the work is finished. 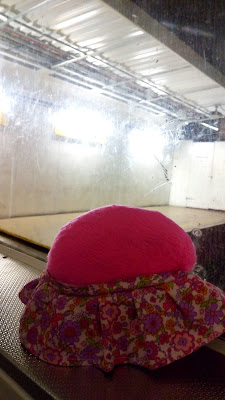 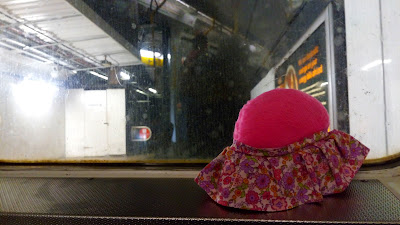 This picture shows that the front seat passengers get a view.  This is taken looking towards Central Station before the train goes into the tunnel containing all the central Newcastle stations.  Blob is enjoying himself so much.  You can tell, can't you? 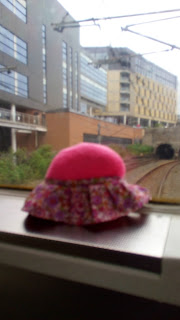 And this picture was taken on the same journey.  It's hard to take these pictures.  Blob's person had to point her phone in the right direction and just keep on clicking in the hope that there would be a picture Blob could share.  Here he is on the blue Metro bridge over the River Tyne.   There are a lot of metal struts and uprights on the bridge.  One would have to be very lucky indeed to take a picture without any of the bridge in view.  Blob's person had to throw away several photos.  This one was the best.  In the distance, along the river, you can probably make out the famous Tyne Bridge and also the swing bridge across the river. 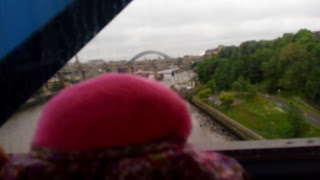 Blob gained a lot of enjoyment from sitting in the front seat of the Metro.  He would dearly love to do it again sometime.  Blob's person says that she has sat in the front seat several times.  She has sat in the back seat too and that's just as good.  She promises that Blob will get another chance to ride in the best seats.  They travel together so much that it's almost inevitable.


Note:  Eagle eyed readers of this post will note that it is based entirely on a falsehood.  Blob was not sitting in the front seat of the Metro at all.  They will have spotted this.  They were sitting in the back seat of the Metro.  The photos from Central Station will have given the game away.  And then the order of the photos will have made the falsehood particularly obvious to anyone who has spent any time riding in Metro carriages.  Blob and his person wish to offer their apologies for this deception.  They began writing this post together firmly convinced that they had travelled in the front seat.  It was only afterwards that they realised that it was the back seat.  They decided it didn't matter too much and changing the entire post was too much trouble.  However, a falsehood is a falsehood and they apologise for any distress caused to anyone who may have been affected negatively through reading the above post.