Blob Thing wants to apologise.  He didn't mean to write as much yesterday and he didn't believe that could be possible that he would be able to.  When he began to think again about his reservoir adventure no words were coming to him.  He was beginning to feel a little disheartened about it and, almost imperceptibly, his smile had begun to sink into a frown.  But then it happened.  He hit the realms of possibility and the words began to flow.  And flow.  And flow some more.  Where starting to write had seemed an almost insurmountable barrier, stopping writing became almost as big a problem.  He might not have stopped at all except his person told him to stop.  Not because she wasn't interested in what Blob had to say - including all he said about how he had been a lot more sensible and clever than she was - but because her typing fingers were beginning to ache.  In any case she had to go out, or so she said, and Blob could hardly type his blog posts on his own.

Blob had written a lot.  He wants to apologise because of the abundance of words.  Only the most devoted Blob lovers could ever have completed the reading of them.  He is sorry.  Blob's person says not to apologise.  If Blob has something to say then his blog is as good a place as any to say it.  And then it's up to other people whether they want to receive the great benefits the wisdom and joviality of Blob could bring them.  She says that Blob has nothing to apologise for.  He doesn't even have to apologise for showing her up so much.  It's okay too because he surely won't write as much in this post because he's writing it late at night and resting would be easier than concentrating.

Today Blob wants to say a little more about a trip he took to Southport.  He's told you already of his chip eating and how delicious those chips were.  He's told you how just recently his person has eaten far too many chips.  It seems he doesn't mind telling you about that again.  Does he really think that if he repeats his opinion enough times his person will change her ways and replace chips with a balanced meal including plenty of fruit and vegetables?

It had been a good day in Southport.  After eating his chips - and then some ice cream too - Blob explored.  He looked in lots of charity shops.  Southport has many charity shops.  There never seems to be enough time to see all of them.  He walked along streets he had never seen before.  He visited a big lake and saw a paddle steamer.  It wasn't steaming anywhere at the time but Blob was very excited because he's never seen a paddle steamer before.  He's still excited.  Yesterday he was looking at books and one of them, The Adventures of Huckleberry Finn, had a paddle steamer on the cover.  That reminded him of Southport.  His person is astonished that something written about the Mississippi could remind anyone of Southport.

Blob was exhausted.  He had explored such a lot.  His person was exhausted too.  His creator was also exhausted.  They had been busy.  They needed a rest and Blob was adamant that their rest should happen in a cafe.  He wanted more food.  Being so busy near the sea had given him an appetite.  So the intrepid trio found a place to sit.  Then they found another place to sit because a flickering light was visible in the first place.

Blob was very pleased with how the day had gone and he was very pleased to be able to eat some more.  His person and his creator weren't hungry but they did want a drink.  In this picture you can see something else they did that day in Southport.  It was bubble day.  At least it was bubble day in the minds of Blob's creator and his person.  They like bubbles a lot.  Blowing hundreds and hundreds of bubbles from a bubble gun can brighten up any day.  Who wouldn't like bubbles?  It should be impossible to not like bubbles.  Blob says so but he is aghast to notice that while the majority of people smile more when they see all the bubbles there are some who still look miserable.  In fact there are some who see the bubbles and look even more miserable.  Some people even look quite cross.  Blob cannot understand it at all.  It is beyond reason.  How could anyone not love something as fun and beautiful as bubbles?  Unless they are allergic to soapy water.  In which they could still love bubbles.  Just at a distance. 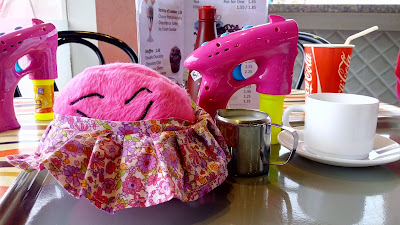 Here's Blob again in the cafe with a Southport park behind him and in the distance a Ferris wheel.  One day he would like to ride on a Ferris wheel.  It would almost be like flying.  [I am not sure whether in this picture he is pretending to fly or whether he had eaten so much during that day that he was having difficulty keeping his dress in place.] 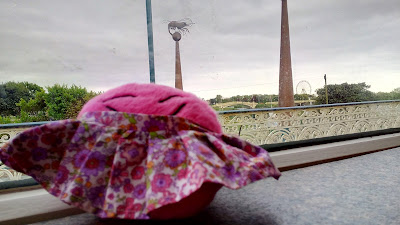 The day had been an amazing adventure for a Blob who hadn't had many adventures in his short life.  He felt like the luckiest Blob Thing in the entire galaxy.  But like all days, this one had to come to an end and he and his travelling companions had to catch a train back to where he was staying.

And here it is.  Here's what Blob especially wants to share.  A very, very special photograph.  He does not have many like this.  This is Blob Thing.  This is his person.  And this is his creator.  Blob and the most important two humans in his life.  In one photo.  Blob has over a hundred pictures of himself.  But he only has a very few that contain himself and his person or his creator.

Blob Thing adores this photo.  He is almost ecstatic every time he looks at it.  He is often joyful.  And this photo fills him with joy that overflows beyond any measure he can measure with.  Just look at the way he's smiling in this picture.

He is smiling just the same way now as he thinks about how blessed he is. 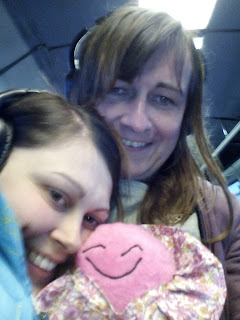