Then when we were on the Metro her plan was to take us to a place called North Shields.  I've been there before, at the end of a walk I want to tell you about soon.  Then we would go on a boat.  I've been on the boat and it was very excellent.  But Winefride hasn't been on a boat and I think she would love it.  And then we would go to a place called South Shields.  I fought a dragon there once.  And then, when the Metro was sitting at a station, my person suddenly changed her mind about the adventure and said that big adventuring might be too much for her.

Instead, we would go on a bus.  We would go to a place called Ashington, look at the charity shops, visit a cafe, and then go home.  And that would be more than enough for her.  I've never been to Ashington but my person has.  Last time she was there she received a phone call full of bad news.  I think she should go back and experience it on a day when she doesn't receive a phone call full of bad news.  That would be good.  The bad news day turned into a good day and it's an important one for my person but it did make her Ashington visit difficult and I wasn't even there to help her through it.

We looked at the time tables at the bus stops.  The bus to Ashington leaves every ten minutes and we wouldn't have long to wait.  I was looking forward to it and told Winefride that if she looked out of the window at the right time then she would see a giant naked woman.  Winefride didn't think that was a very special thing to see.  I could tell by the way she looked at me.  But then I told her that she was made of earth and if we ever climbed up to the top of one of her breasts we could probably roll all the way down to the bottom.  Winefride liked the sound of that a lot.  She hasn't tried rolling before but she got quite excited thinking about it.

But then our plans changed.   My person decided that we would get on the next bus that came, if it was one that went away from Newcastle.  We would go wherever it took us.  Yes, our day was a real mystery and we could have gone anywhere.

Anyway, I'm not meant to be telling you about yesterday.  We took pictures and I'll share them soon.  I want to share all of the pictures I've taken with Winefride.  I love my sister.  Yesterday was her birthday too.  One week old.  Exciting.

Today I want to tell you about one of my friends.  I've got lots of friends here living with me.  Less than a week ago I got two more friends.  A monkey came to live with us and a bear came too.  They're really nice.  Lots of friends and I want to introduce you to them all.  My person hardly had any friends a year ago.  There was just a little dog that sat outside, and an old bear that was lying neglected in a bag in the wardrobe.  Poor thing.  Now she has lots and lots of friends.

The first new friend she got was Amethyst.  I've already introduced you all to Amethyst.  I did that over a month ago in my twentieth blog post.  I've been meaning to introduce you to my other friends but life has been very busy and I've had so much to share.  I am incredibly lucky for a small toy.

Here I am with Amethyst.  What a good friend to have. 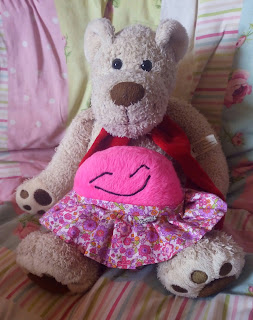 Today I want to introduce you to another friend.  A small friend.  So small that he is even smaller than me.

But Pink Pig lives with us.  He's great.  So cute and clever, but a bit of a show off sometimes.  You can always count on Pink Pig to add some liveliness to any day.  Here's a picture of me with Pink Pig.  Two friends together. 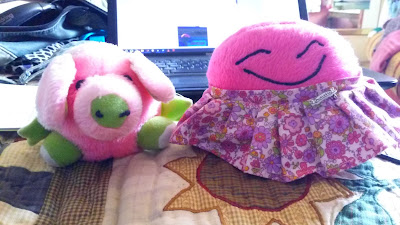 Pink Pig came with us to Manchester one time.  That was exciting for him.  He was able to meet my creator and was able to meet all her friends too.  It's good that she has friends.  I found it funny yesterday.  My person filled in a little questionnaire in the street where we went.  It was all about a museum she had never heard of and will possibly never visit at all.  One of the questions asked her who she was with when visiting that place.  She spent ages deciding what box to tick.  Should she tick that she was on her own?  Or should she tick that she was with friends?  Because she was with friends.  Two of them.  There was me.  And there was Winefride.  But in the end she decided that maybe the people who had made the questionnaire would think that was silly.  Maybe they were only talking about human friends.  Not soft toy friends.  And maybe not dog friends either although we weren't with a dog.  So she ticked that she was alone even though it was obvious to us all that she wasn't.

Oh yes.  Pink Pig.  I think he enjoyed Manchester.  But he's pleased to be home.  At least I think he is.  I don't know quite what he's doing right now.  I thought he might be here to help me write about him but where is he?  I don't know.  He's not in the place he likes sitting most.  He's not in his second favourite place.  Maybe he's somewhere with all the other friends.  I wish he was here at this moment and then he could tell me what to right.  But he isn't and I'll just have to deal with it.

Pink Pig isn't just pink.  His feet are white.  His legs and his nose are green.  And his wings are green too.  Yes.  Wings.  Pink Pig has little green wings.  That's not the most common anatomical structure for a pig to possess.  But he's got wings and he's not afraid to use them.

One more picture.  Here's Pink Pig.  Isn't he marvellous?  He's good to have around.  But I don't love him like I love my sister.  Tomorrow I'm going to talk about my sister some more and share one of the things we did on her first day out.  It's hard to believe that was less than a week ago.  It's hard to believe that less than a week ago she had her first day out and she did ever so well even though we went to a different country where they speak another language.  Yes, tomorrow I talk about Winefride.  I love my sister.  Did I say that already? 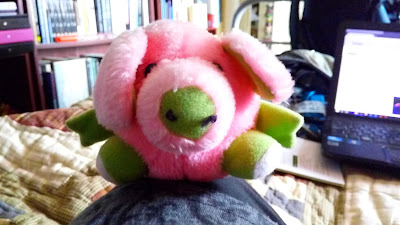 Pink Pig, wherever he is, is good fun.  But as I said, he does like to show off.  Because he has those fabulous green wings and I can tell you that he uses them well.  You wouldn't think little wings like those would be enough to lift such a round pig off the ground.  But they are.  I don't know how.  Science says that Pink Pig should remain on the ground.  But he's magic.  I'm magic too.  How else do you think I do all the things I do?

His magic is such that not only can he take off, he can land safely too.  He likes to land in different places and quite often spends part of the day on the top of the book shelves, basking in the light and looking at the view.  And then he will jump off and just as you think me might crash down onto the carpet below and hurt himself he flaps those little green wings of his and swoops upwards and he laughs.  Once he knocked a box from the top shelf when he jumped off.  Luckily nothing broke but it took us all ages to get it back up there.

Pink Pig likes to show off his skills.  He's not being mean or anything.  He just wants to be the best version of himself that he possibly can be.  And naturally enough that means he wants to fly as much as he can and develop as many acrobatic skills as he can.  He doesn't just want to fly.  He wants to live.

Adunno tells me that in the house he used to live in - before he had surgery to become an autism friendly unicorn and came to live with my person - the people there had a little book that they sometimes read.  It was one of their favourites.  That book was called Jonathan Livingston Seagull.  Adunno says that the way Pink Pig flies around reminds him of that book.  He's a bit like Jonathan Livingston Pink Pig.

So that's Pink Pig.  He's my friend.  I need to introduce you to all my friends eventually.  I haven't even introduced you to Adunno.  He's an amazing unicorn.  Even more amazing since the surgery I mentioned.  Not that I knew him before that and I bet he was a pretty marvellous unicorn already.  Yes.  More friend introductions are needed.  But not tomorrow.  Tomorrow I want to talk about my sister.  Perhaps I'll just dictate from my head again.  Or perhaps I'll get into more discussions with my person about it all - and Winefride will be with us of course - and we can put my thoughts into a more coherent form rather than just forcing my person to type a torrent of words so quickly that she has to tell me to slow down because, even with advanced typewriting qualifications, she can't keep up with the stream of thoughts that are coming out of my mouth.  Just like then.  But that time I was talking too fast for her on purpose and her fingers were struggling a lot.  I should stop.  I love Pink Pig.  I love all my friends.  But I love my sister more than all of them and in a different way.  And she's not even two-hundred hours old yet.  Amazing.